Burger King encourages people to 'order from McDonald's' during next lockdown

The brand reaches out to rivals in France and U.K. following criticism over U.S. campaign featuring shuttered restaurants

Burger King found itself under fire last week for a Halloween campaign in which it highlighted rivals' shuttered restaurants in the U.S. as "scary places." But now, a campaign that started in France is reaching out to competitors in a spirit of pandemic magnanimity.

Following the announcement of the most recent French lockdown a week ago, this weekend the brand's French business launched a print campaign with the headline "Order from McDonald's." The ad, which ran in French national newspapers L’Équipe and Le Journal du Dimanche and posted on social media, goes on to encourage people to also order from rivals such as KFC, Pret a Manger, Domino's, Subway and several local chains.

"We never thought we'd be asking you to do this," says the copy. "But restaurants employing thousands of staff really need your help at the moment."

It goes to to say that while "getting a Whopper is always best," "ordering a Big Mac is also not such a bad thing."

The month-long French lockdown, announced by President Macron, started on Thursday and sees bars and restaurants closed but takeaways and home delivery still operating. A spokeswoman for Buzzman said the campaign was conceived in three hours after the lockdown was announced on Wednesday evening.

Following the launch of the campaign over the weekend, the U.K. is also now running its own version of the campaign  on the heels of a lockdown announcement by the British government on Saturday. The U.K. tweet mentions British restaurant chains such as Leon and Greggs as well as global rivals like Taco Bell, Pizza Hut and Five Guys.

Fernando Machado, Global CMO at Burger King parent Restaurant Brands International, told Creativity in an email that the campaign "is not linked in any shape or form to the activities of other markets during Halloween. We tend to activate Halloween with multiple ideas every year," he says. "We had ideas in France, Brazil, Sweden, USA, etc. The noise we got in U.S. was really minimal and linked to advertising industry publications. The restaurants shown in the U.S. Halloween ad have been closed for years and most people actually understood that our intention was not to play on the hardships associated to the pandemic." 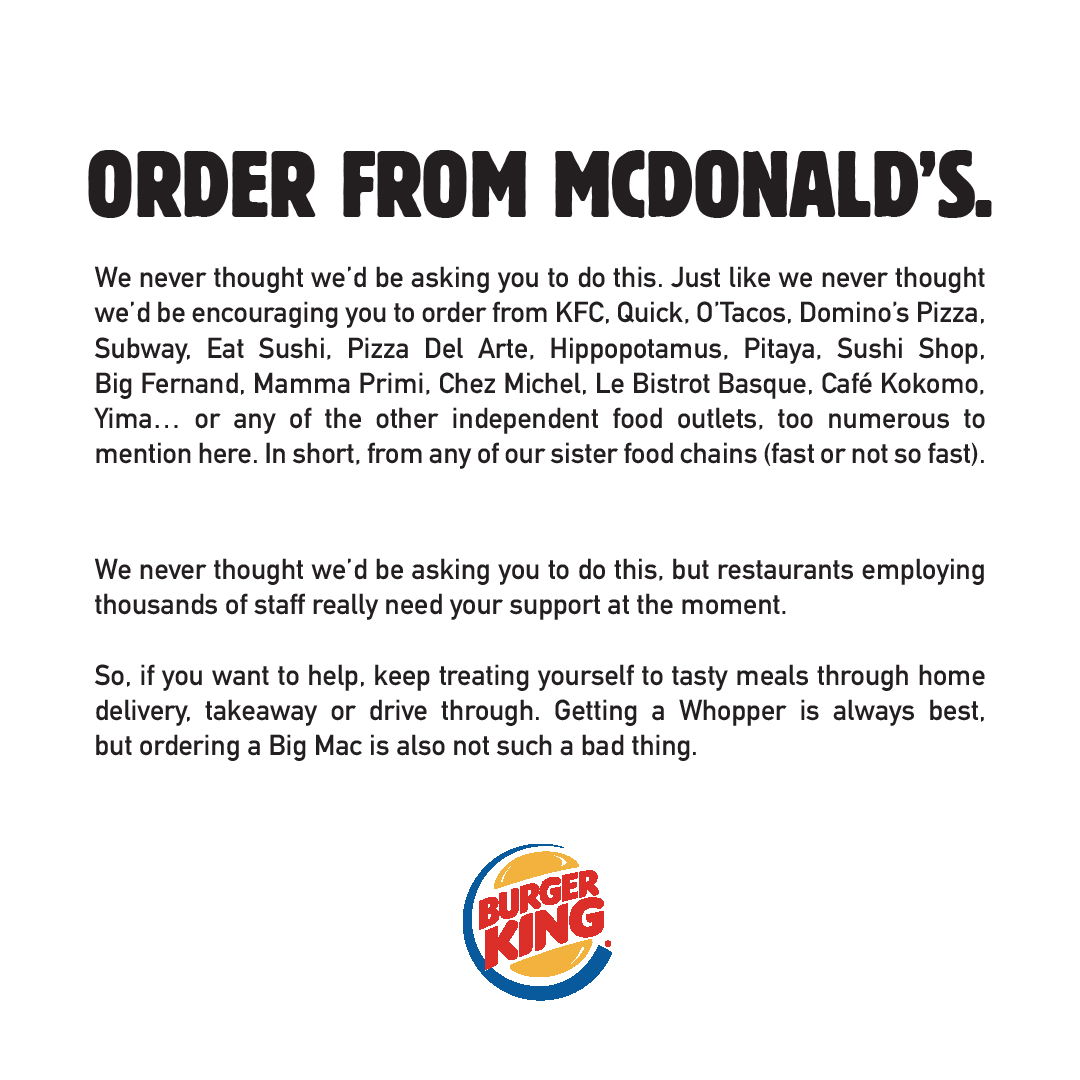 Burger King (France): Burger King is giving away bags of potatoes to go with customers' burgers and fries