Suicide prevention charity CALM (Campaign Against Living Miserably) has revealed it is a behind a new campaign that shows the last photos ever taken of people who have died by suicide.

The campaign, by Adam&Eve/DDB, aims to raise awareness of suicide, revolving around the insight that the signs of someone being about to take their own life aren't necessarily visible.  It kicked off on Monday, with an exhibit of photographs on London's South Bank simply titled "The Last Photo." People were directed to an series of photos of smiling, happy-looking people, but with no explanation of what the photos signified.

Today, the exhibit was revealed, via a segment on ITV daytime show "This Morning," to be the work of CALM, and that the photos are of real-life people who died by suicide in the U.K.. Visitors to the exhibition will now be able to scan QR codes to take them to a website where they can find help and resources to learn more about suicide prevention. 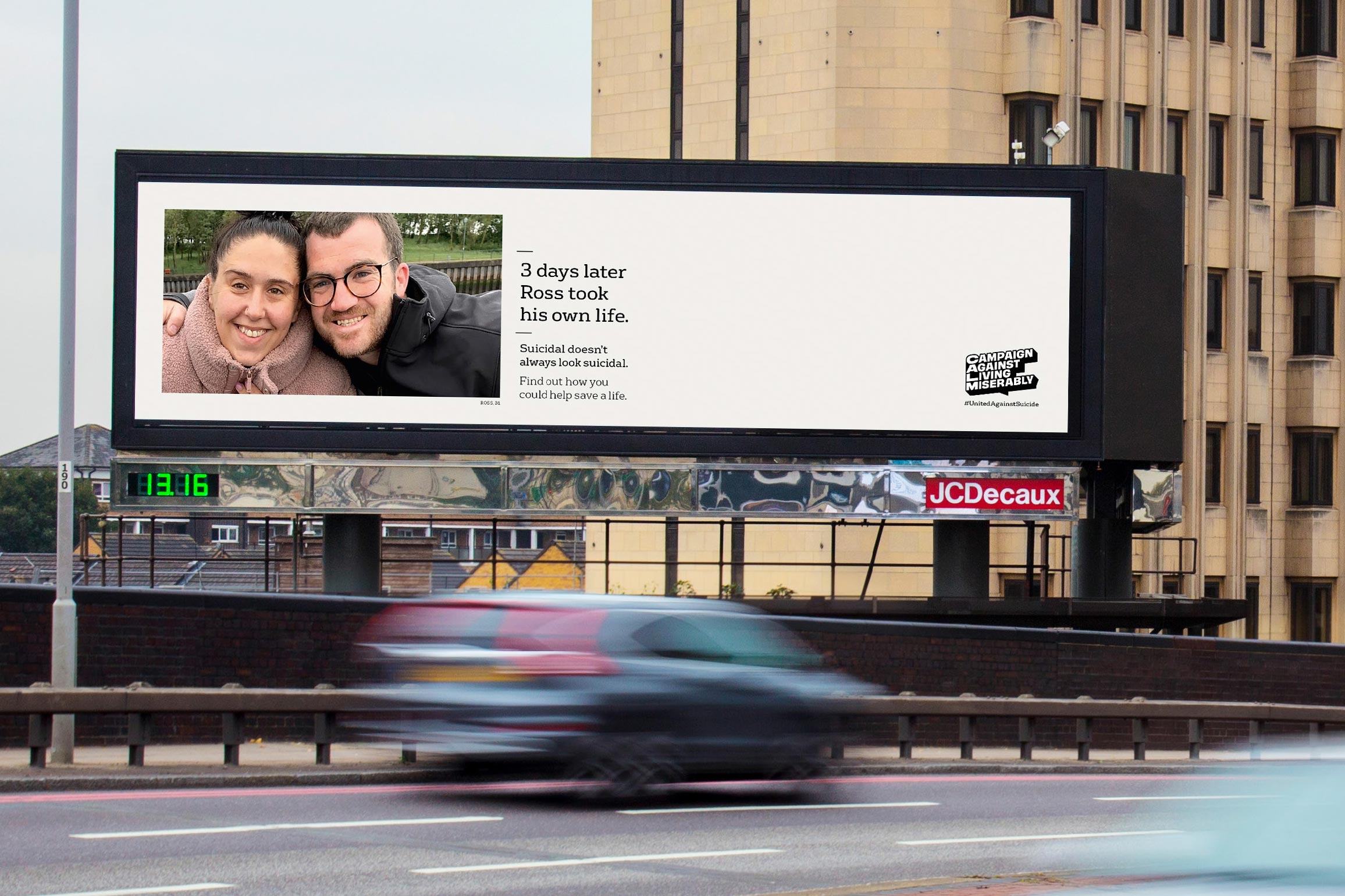 The installation is also accompanied by a 90 second TV and cinema film featuring video footage of some people who died by suicide. The agency worked closely with the families to create the piece, directed by Max Fisher.

The campaign, which is the biggest CALM has ever launched, will also include out-of-home billboards across the U.K., press and digital ads, while celebrities and influencers including Professor Green, Shirley Ballas and Kem Cetinay, some of whom have lost close friends and family to suicide, will also promote the campaign through their own channels. 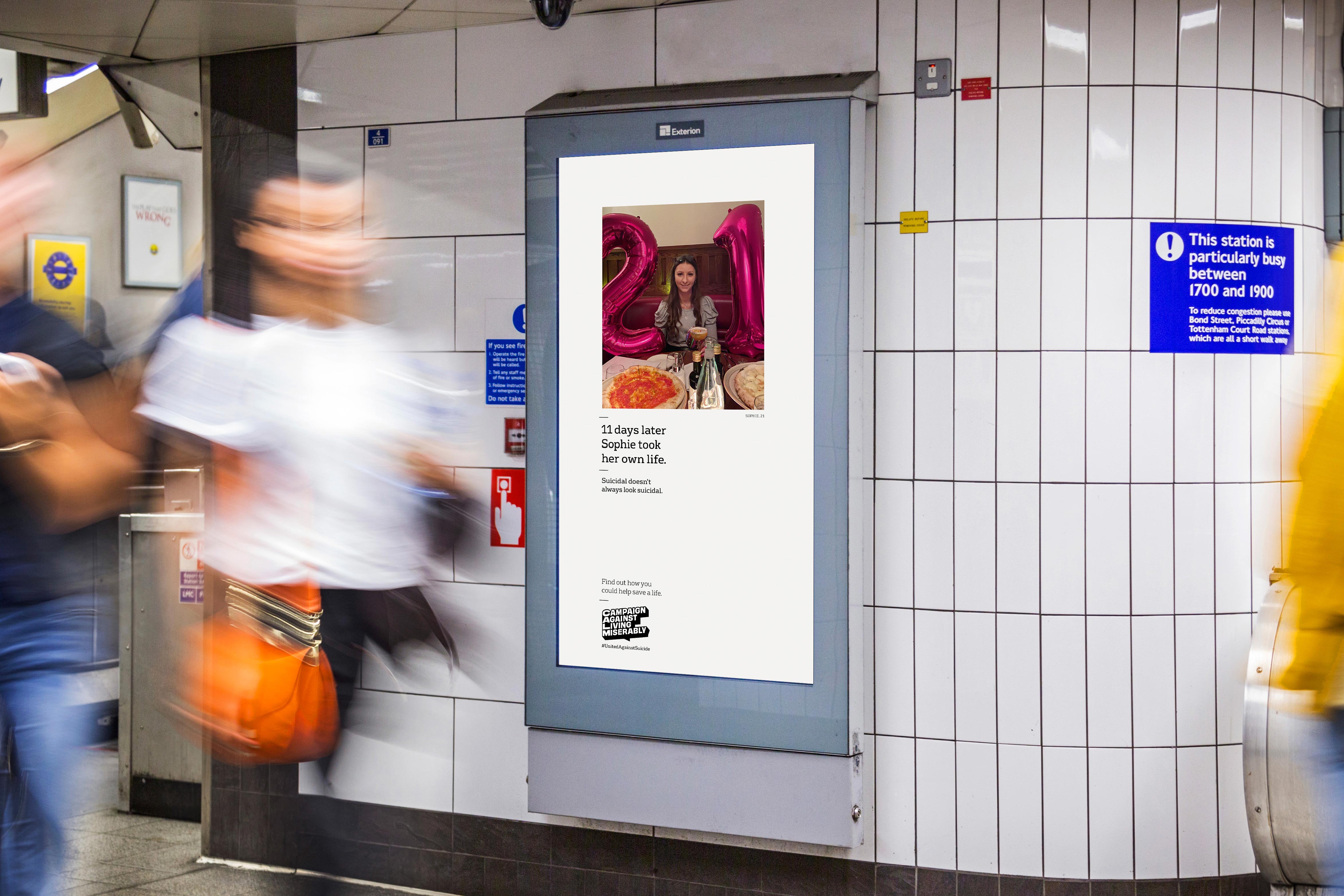 The Last Photo is a follow up to Adam&Eve/DDB's 2018 campaign for CALM, Project 84, a harrowingly graphic installation that placed sculptures of the 84 young men who took their lives each year in the U.K. on a rooftop in London. Since then, CALM has broadened its focus beyond young men to include suicide prevention among women as well. The new effort comes as suicide numbers continue to rise in the U.K., with 125 lives lost every week.  However, given the focus on statistics of pandemic deaths more recently, the agency had to find another way to raise awareness rather than emphasize numbers again. 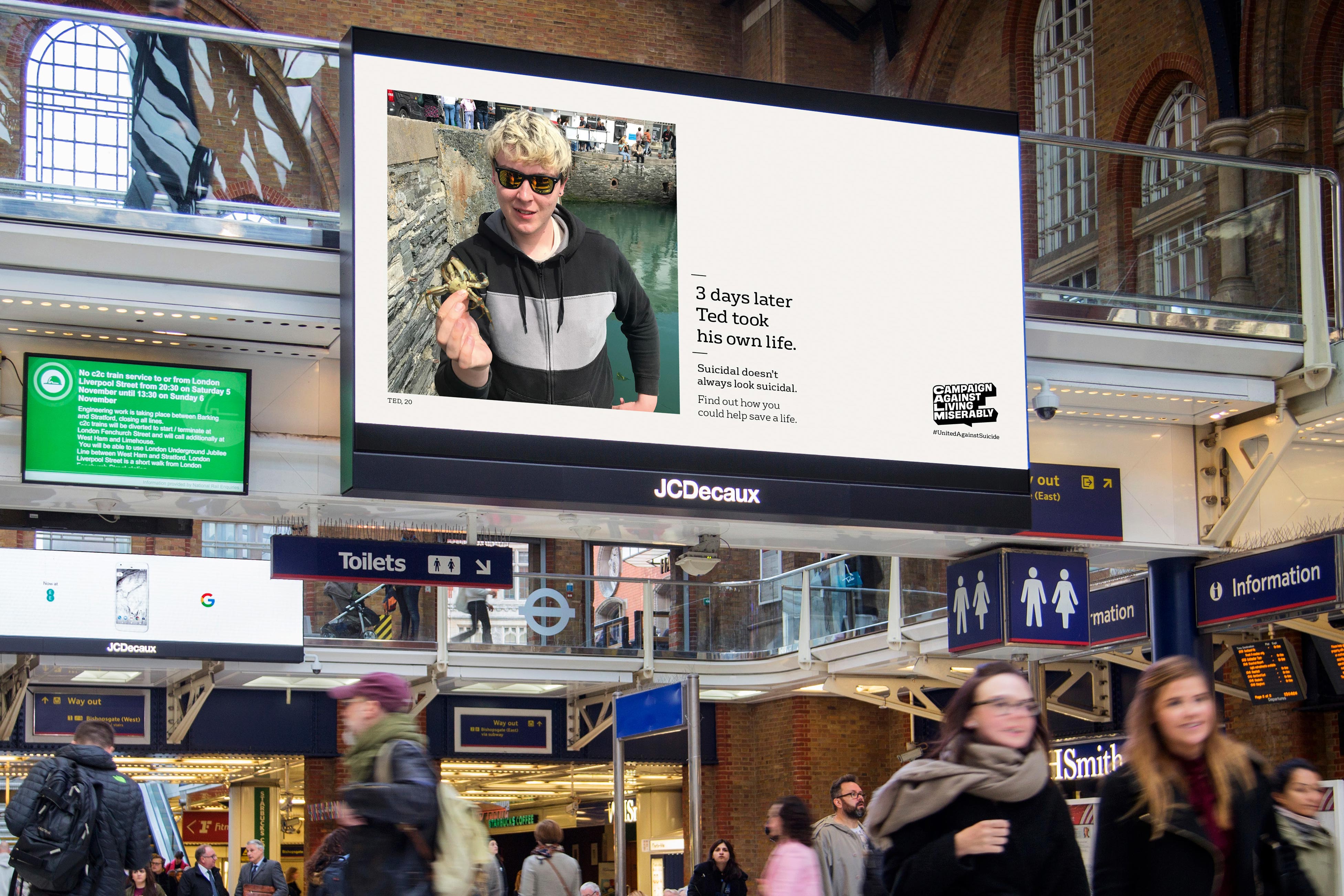 The new campaign aims to break down some of the stigma behind suicide as well as show that the signs aren't always obvious, as often friends and family are reluctant to bring up the subject with people who are depressed.

“Behind every smile is a tragic story of loss and despair that touches family, friends and communities," said Simon Gunning, CEO of CALM, in a statement. "We like to thank all the families that contributed to the campaign for their strength and courage in stepping forward and sharing these powerful stories. There has long been a stereotype and stigma surrounding suicide that has held people back from opening up and talking about their feelings, and seeking help when it’s needed." 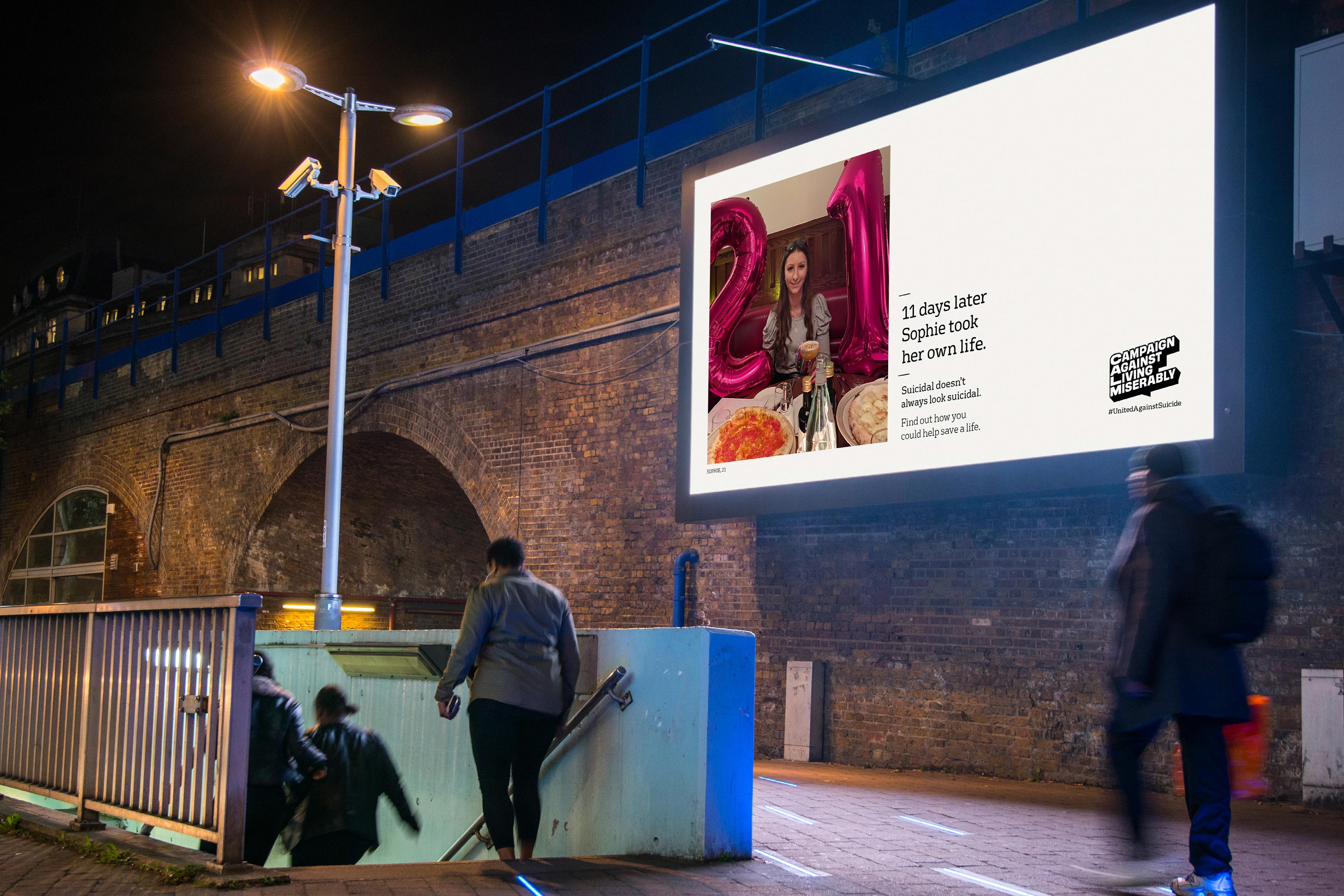 “While Project 84 put suicide on the national agenda, ‘The Last Photo’ takes the issue a step further by actively empowering the nation to prevent suicides," added Ant Nelson, executive creative director at Adam&Eve/DDB. 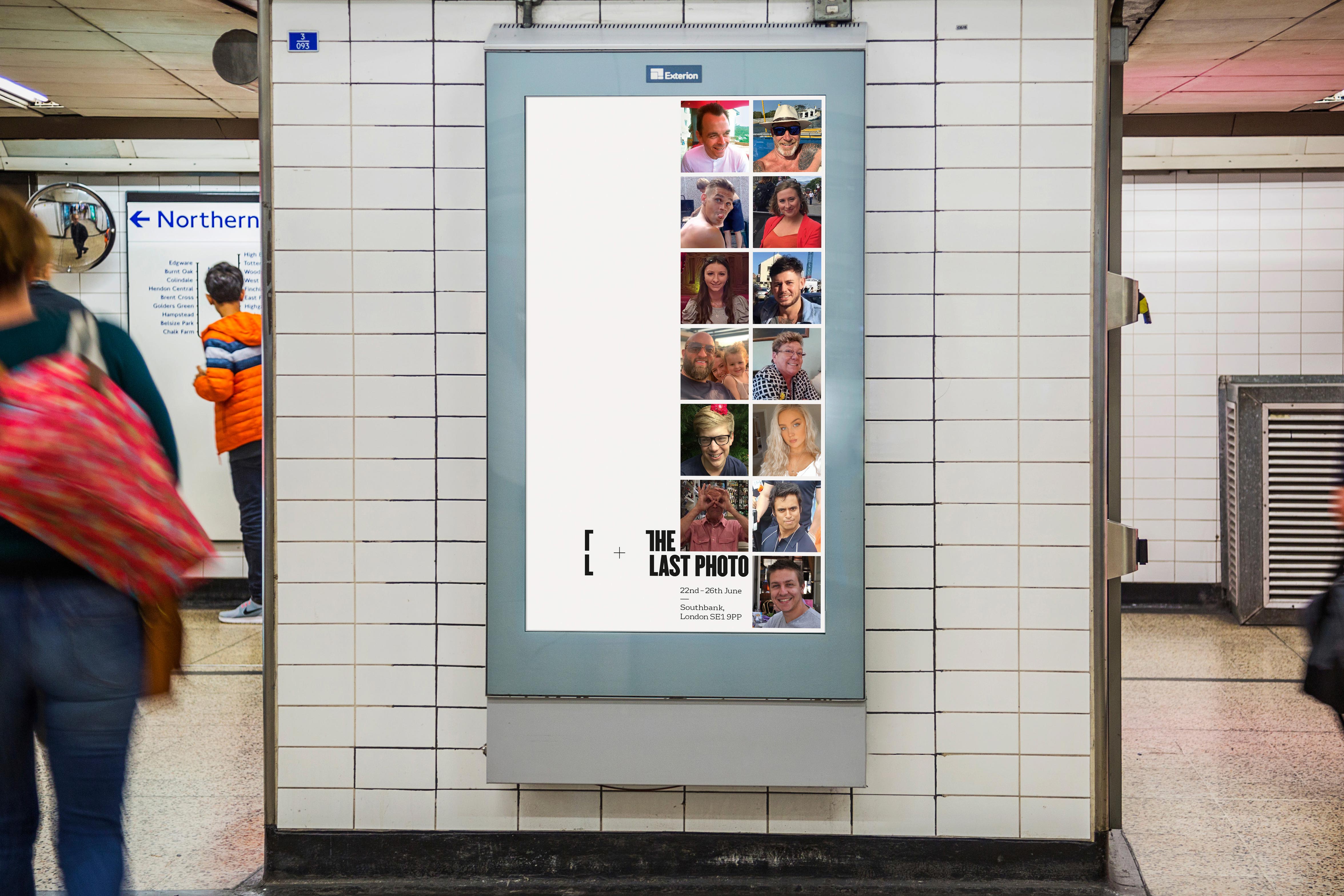