F!ve Drinks Co. tries to attract a star to invest in the growing segment in campaign from Gut

Canned cocktail brand F!ve Drinks wants to get in on the celebrity-owned brand game—by enticing a superstar into buying its company.

The brand’s new campaign, via Gut, stars the company’s CEO and Co-Founder Felipe Szpigel, a former Anheuser-Busch InBev executive. In a new digital film, he tells viewers they need not keep watching unless they are a celebrity.  Those who are famous he invites to keep watching as he shames them into not yet owning their own company.

“All your big celebrity buddies own a gin brand, a tequila brand, a mezcal brand, but today, you can become a partner in the fastest growing segment in the beverage space,” he says.

Indeed, the sector has been booming. A study from IWSR Drinks Market Analysis on ready-to-drink beverages found that globally, the RTD market is poised to grow 41% from 2019 to 2024. (IWSR includes malt, wine and spirits-based drinks in the RTD category.)

“We’re the number one brand in the segment,” Szpigel continues, referencing a USA Today poll  of its readers, before going on to make a pretty transparent dig at perhaps the most famous celebrity gin brand founder.

“Which means, you can keep using your acting talents, for acting, rather than shameless self-promotion of your liquor brand,” he says.

Yes, we're pretty sure he's talking to you, Ryan Reynolds. 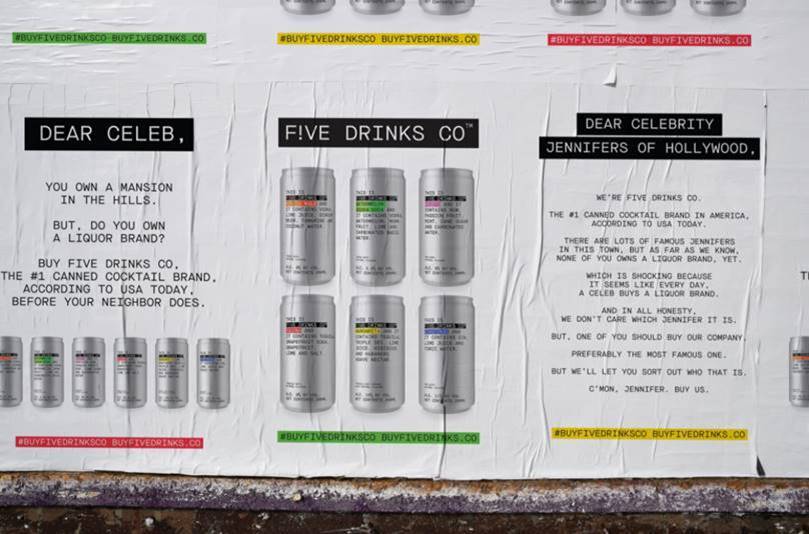 Five Drinks Co. was founded in 2019 by Szpigel, who previously served for more than two decades at Anheuser-Busch InBev, and his four friends, brothers Jeremy and Chris Fox, founders of 10 Barrel Brewing Co., Gustavo Sousa, a former creative partner at ad agency Mother and Roberto Schuback, who was previously with ZX Ventures, the global growth and innovation group at AB InBev.

The campaign is running digitally and in out-of-home, specifically, a roving digital billboard and wild postings in the L.A. area—perhaps the ideal spot to target a potential celebrity buyer.

Regular old people can get in on the action by tagging their favorite stars on Twitter or Instagram with the @fivedrinksco handle. Those who are first to tag the celebrity who purchases the brand will receive a check for 1% of the sale. 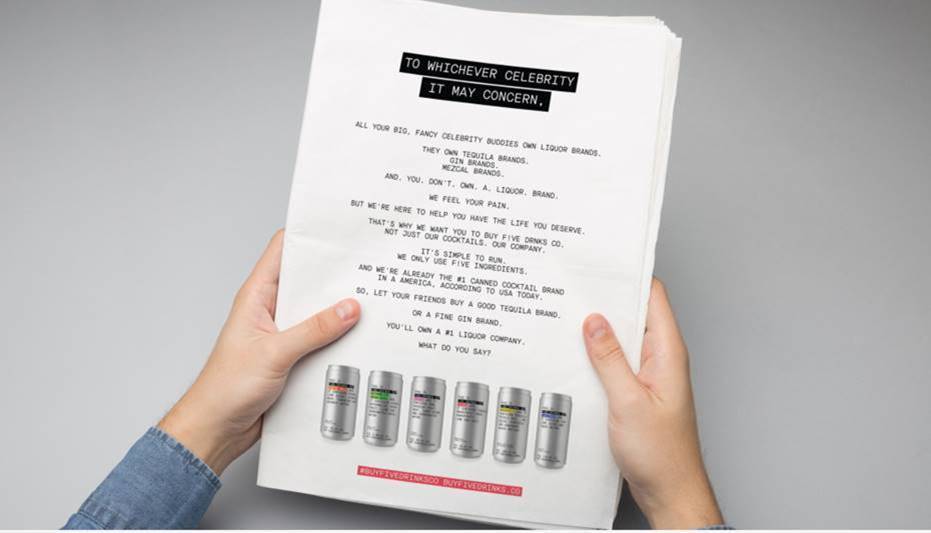 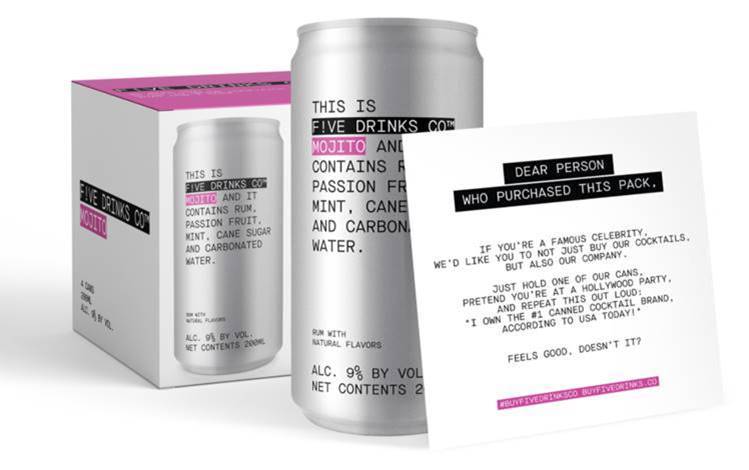