The telltale signal of a Cheetos snack—the bright-orange detritus that’s often smudged onto a napkin or accidentally onto the pants of the eater—is finding a new home on canvas.

The street artist known as Lefty Out There will present eight new pieces created entirely of “Cheetle,” or what the snack company Frito-Lay calls the residue of the popular snack, as part of Art Basel, the annual art fair opening Dec. 4 in Miami Beach.

“Yacht the Basel: The Art of the Cheetle” will be presented by Frito-Lay along with Rock the Bells, the hip-hop culture and events company founded by rapper LL Cool J.

For Frito-Lay, the exhibit continues the snack marketer’s trend of turning a supposed drawback of its product—the mess it makes—into a distinctive element worth celebrating.

"Cheetle" previously has been featured in Super Bowl ads.

“Over the years, fans have used Cheetos as inspiration for so many different things – from fashion to beauty to culinary and more,” Jessica Spaulding, senior director of marketing, Frito-Lay North America, said in a release. “Now, we’re excited to see how Cheetle—the orange dust that our fans wear proudly on their fingertips—is brought to life at Art Basel through the incredibly talented Lefty Out There’s artwork.”

Lefty Out There, also known as Franco Campanella, is a Chicago-based street artist who has collaborated with Nike, Adidas, Megan Thee Stallion, Bad Bunny, and Chance the Rapper. 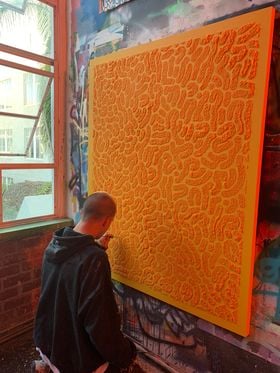 “Creativity and expression have always been central to the hip-hop movement, which is why we are thrilled to team up with Cheetos, a brand that is all about celebrating self-expression in all its forms,” said James Cuthbert, president of Rock The Bells. “We’re also excited to have Lefty Out There on board for this special event and can’t wait to see his bold and dynamic style brought to life in an entirely new way.”

The exclusive one-day event will take place on the SeaFair, a 220-foot, four-story megayacht docked at Bayfront Park in downtown Miami.

After sunset, the yacht will tour the harbor with Cheetos-inspired cuisine and cocktails for invite-only guests. 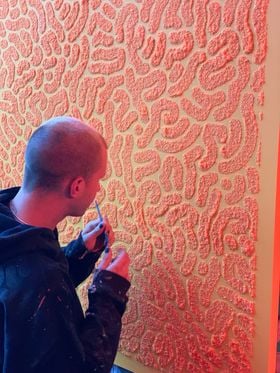 “This event will be one for the books. New techniques, a unique venue and a one-of-a-kind opportunity to take on a new challenge. Should be one hell of a party,” said Lefty Out There.

During the run-up to the event, fans will be able to follow Lefty’s creative journey of bringing his Cheetos-based artwork to life with Cheetle through a series of behind-the-scenes videos that will be released across Rock The Bells’ social media.

Cheetos: Cheetos updates Shaggy's 'It Wasn't Me' for its Super Bowl spot