Here’s one way to cut through the political divide on climate change: Tie it to the price of beer.

With a campaign debuting today, Fat Tire argues that without environmental action, beer drinkers could one day pay as much as $100 for a six-pack due to rising agriculture costs and broken supply chains. Talk about a buzzkill.

To prove its point, the New Belgium Brewing-owned brand will charge $100 for six-packs for one day only (today) at select retailers. Fat Tire is spreading the message via paid marketing, including a full-page ad in The New York Times, as well as buys with NPR, The Guardian, Facebook and Twitter.

The campaign comes as public opinion on climate change remains a split along political party lines, with 78 percent of Democrats calling it a top priority, compared with 21 percent of Republicans, according to Pew Research Center polling data published in February. 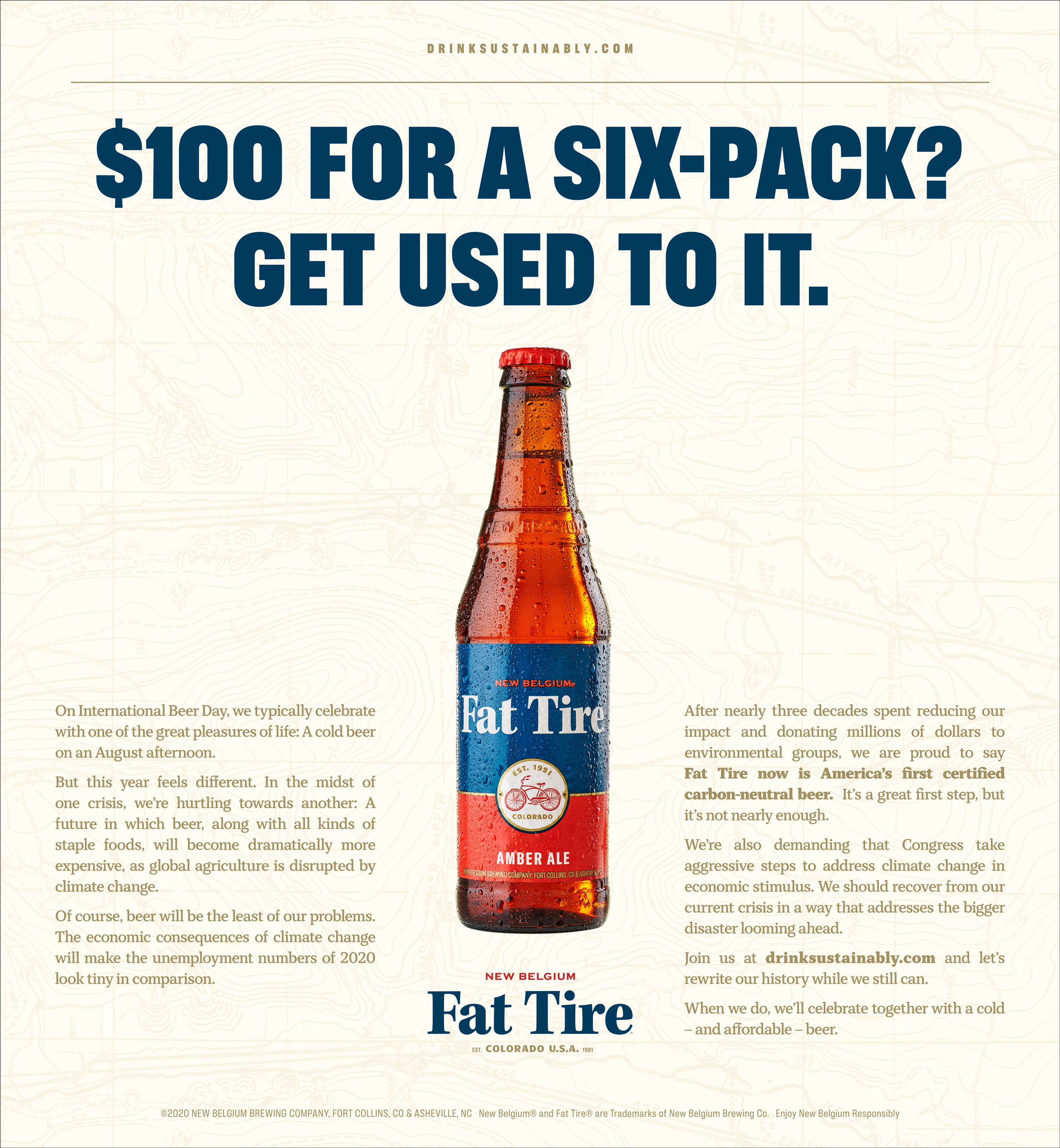 Fat Tire’s ads, which are handled by Portland-based Red & Co., aim to cast the issue in economic terms that resonate with both tree huggers and beer chuggers. One ad is headlined “$100 for a six-pack? Get used to it.” In finer print the ad references COVID-19, stating that “in the midst of one crisis, we are hurtling towards another: A future in which beer, along with all kinds of staple foods, will become dramatically more expensive, as global agriculture is disrupted by climate change.” Fat Tire is also plugging itself as the “first nationally distributed beer to earn carbon neutral certification in the United States.”

“A lot of times when people hear climate change or carbon neutrality, if you are not part of a small group of really committed progressive people, you kind of turn it off ... it’s like, ‘oh yeah that is the stuff hippies talk about,’” says Belongie. But with the campaign, Fat Tire is saying, “if you like beer, you should care about this,” he says.

The campaign is timed to coincide with International Beer Day, one of many faux holidays that dot the calendar celebrating everything from fresh breath to cherry popsicles. The creation of the beer holiday, celebrated on the first Friday in August, dates back to 2007 and is widely credited to Jesse Avshalomov who founded it in 2007, according to multiple reports. He originally reached out to a few bars in California about partaking in it, according to a 2018 NPR interview. But, as with most of these manufactured holidays, big brands have jumped on the bandwagon.

Fat Tire’s campaign is more serious than what other beer brands are doing this year for the suds celebration. Molson Coors-owned Miller Lite, for instance, is giving free beer away (in the form of rebates) to people who live in one of 110 U.S. zip codes where cities share the name of global locales, like China, Michigan; Belgium, Illinois; and Trinidad, California. Peroni, the Italian import also owned by Molson Coors, is selling Peroni Gelato in partnership with New York-based gelato brand il laboratorio del gelato. Meanwhile, Anheuser-Busch InBev is marking the day with a virtual music festival called International Beer Fest that includes performances by Jason Derulo and Prince Royce.

Fat Tire’s more sober approach is meant to contrast the holiday’s normal frivolity “with what might be the future of beer without climate action,” Belongie says.

The campaign includes a letter penned by New Belgium CEO Steve Fechheimer in which he calls on other business leaders to “fight for smart climate policy now—and decimate the false narrative that clean energy is a job killer, opposed by corporations, which is still a refrain you hear from some so-called ‘pro-business’ politicians.”

Fat Tire earned its carbon neutral certification from SCS Global Services, a California-based firm that grants labels to companies that meet international standards. New Belgium, which is based in Fort Collins, Colorado, has a goal of making its entire business carbon neutral by 2030.

Patagonia clothing tags ask customers to 'vote the assholes out'

Father and son Formula 1 champs team up to promote Heineken 0.0 (and send a safety message)