Gorgeous posters show where Asian Americans are 'really' from

Series from the Asian American Federation claps back at familiar assumption

This month, the Asian American Federation debuted a series of posters in response to the recent spate of anti-Asian hate crimes in the U.S. Droga5 partnered with Asian and Asian American artists on a pro-bono campaign to address the xenophobic question, “Where are you really from?”

“When an Asian-American says, ‘I’m from New Orleans’ or ‘I’m from East Lansing,’ all too often the next question they get asked is, ‘Yeah, but where are you really from?’ This doesn’t happen in the same way to other Americans who get the response ‘Oh, New Orleans is a fun town’ or ‘My cousin went to Michigan State,’” said Kevin Kwan, author of “Crazy Rich Asians,” in a statement. “This has the unfortunate effect of making Asian-Americans feel like they’re somehow less a part of America than other people.” 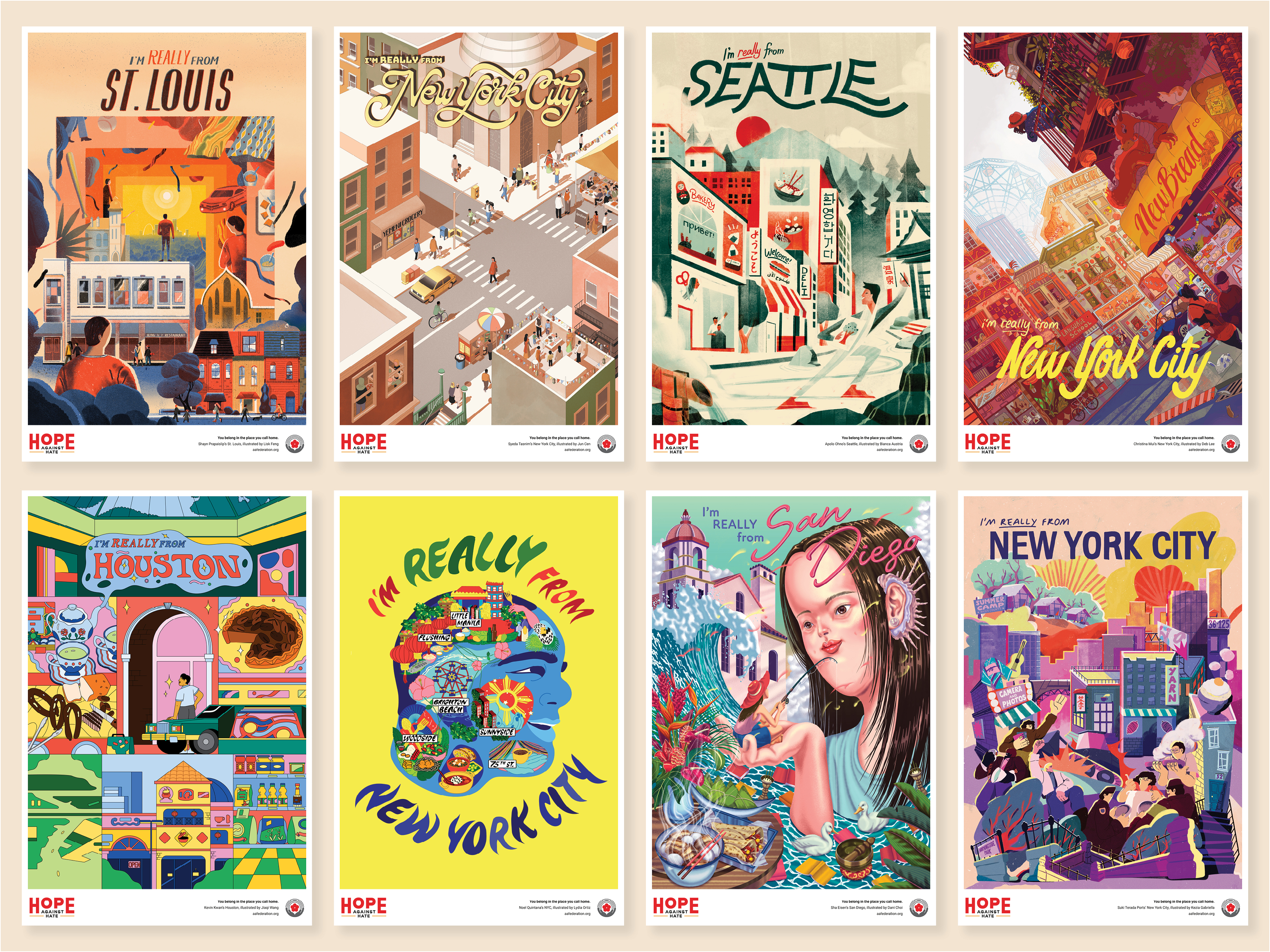 Kwan’s collaboration with Jiaqi Wang is a vibrant representation of the author’s Houston home. The sharply ordered nature of the design is contrasted by maximalist coloring. Like a lava lamp, neon hues swirl and spill through geometric scenes depicting pie, tea, an art gallery and a city skyline.

Ohno’s poster by Bianca Austria melds his Seattle home with his Japanese heritage with pops of red amongst cool blue and grey tones. Lisk Feng’s portrayal of Shayn Prapaisilp’s St. Louis is like the STJ Group Holdings chief operating officer's life as nesting dolls, golden layers overlapping with the city’s iconic arch at its heart. And Kezia Gabriella’s illustration of New York City through activist Suki Terada Ports’ eyes is a sunset-hued cluster of the city’s people, skyscrapers and parks, merging together to form a scene of contrasting conflict, joy and beauty.

“All the way back to when Chinese immigrants were brought over to work on the railroads in the West, America has had a long history of anti-Asian sentiment. While anti-Asian vitriol has continued to impact our diverse pan-Asian community, the escalation of violence in the last year has been especially shocking,” said Jo-Ann Yoo, executive director of the Asian American Federation. “Our goal with this campaign is to reaffirm to our Asian brothers and sisters that where they live is their home, that they are welcome, and that they are not alone. We also hope that our non-Asian friends and family will see this campaign and understand that we belong here and care about this nation as much as they do.”

The posters are available as prints for digital download or mail order through a donation to Hope Against Hate, the Asian American Federation’s initiative against anti-AAPI hate.