For our AAPI Creative Excellence series, Writ Large manager and producer Bash Naran shares the story behind the forum he created to promote Desi voices in the entertainment world 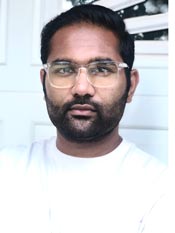 In this installment of our Asian American Pacific Islander Creative Excellence series for AAPI Heritage Month, we dive into Hollywood with Bash Naran, a literary manager and producer at Los Angeles-based entertainment management and production company Writ Large. His practice focuses on writers, directors and producers of film, scripted and unscripted television, and his clientele are predominantly BIPOC and LGBTQIA+ talents who aim to tell the “untold” stories of our generation. Prior to working in entertainment, Naran was the CMO of Doucce Cosmetics in New York City. He also previously worked at CAA Marketing (now Observatory) for clients such as General Motors, Chipotle, Canada Goose and Fender. Along with his day job, Naran is co-founder of The Salon, a Hollywood-based forum that aims to nurture the careers of South Asian artists.

This week’s guest editor, Anomaly L.A. Partner and CMO Aisea Laungaue, praises Naran for his efforts to bring diversity and inclusivity to Hollywood. “If something's broke, not everyone rushes to fix it,” he says. “But people like my friend Bash do. He saw the lack of representation of diverse voices in Hollywood's slate and sought to rectify that with initiatives like The Salon which are helping to champion emerging voices of South Asian talent by pairing them with South Asian mentors in Hollywood. If you can see it, you can be it,  and Bash is making that happen for a new generation of South Asian talent.”

Here, Naran shares the story of how The Salon came to be, its successes so far and his hopes for it going forward.

When I began my second career in entertainment in 2014, I very, very quickly realized the absence of South Asian (Desi) voices in the industry. Especially behind the scenes—in the agent's and producer's offices. My calls and emails to the few prominent Desi producers were left unanswered and I was left disheartened that there was any hope for me—a true outsider—in this daunting town.

However, as I rose the ranks from assistant to executive to manager, it was the Desis beside me that inspired the creation of The Salon. Prior to our launch in 2019, several versions of the concept had fought to come to fruition. It wasn't until I met actors Nik Dodani and Vinny Chhibber that the organization that exists now was born.

At first, we hosted dinner parties to simply connect all the Desis that didn't know each other. Our belief was that if friendships are made, business will form. And that happened. Films were financed and packaged, actors were cast, writers were hired. But, Nik, Vinny and I knew that we needed to do more.

Still to this day, I feel like those few Desi producers back in 2014 should've reached back out and offered guidance or set me on the path to guidance. I didn't want Desi college grads coming to L.A. to feel as if they weren't supported or had no resources. So The Salon tapped Reena Singh (SVP, Disney Branded Television) and Rishi Rajani (President, Hillman Grad) to work alongside us in creating our Mentorship Program.

We went to 23 Desi gatekeepers and put out an open call. We received over 850 applications and found 23 mentees to pair with mentors. Since January, they have been meeting at least once a month. We've hosted monthly panels and are focused on both educating mentees with hard and soft skills to prepare them for successful, dynamic careers in the business.

In just five months, mentees have already been promoted in their own workplaces due to the program and Hollywood studios have forged communication pipelines with The Salon to ensure our mentees and wider community are being seen, heard, and employed. And, for as long as I am employed in this industry, our mentorship program will exist in a yearly format to tear down the gates and ensure we all can have a seat at the table.