Jennifer Aniston doesn’t just represent any brand, according to Tracey Halama, CEO of Vital Proteins, which is why the executive was so thrilled for the “Friends” star to join her team as chief creative officer.

The partnership began officially in late 2020, but Aniston has been a Vital Proteins user for much longer, since her doctor recommended the collagen product in 2015, before it started appearing in viral influencer posts across social media. “She's been using our product for longer than most people had even heard of Vital Proteins,” Halama said of the natural partnership. “Then you pair that with—fundamentally, I don't think there's anyone that represents healthy aging better than Jen.”

Aniston isn’t just a face for the company. She’s taken on roles behind the scenes, designing its new line of Vital Proteins & Jennifer Aniston Bars, a collection of nutritional bars packed with protein and collagen—plus a few of Aniston’s favorite, more unusual ingredients, such as Lion’s Mane and Reishi mushrooms with benefits for focus and energy.

To launch the bars, which feature flavors of peanut butter fudge, cold brew coffee and dark chocolate coconut (“The fun part is getting to taste them,” said Aniston), Vital Proteins recruited an all-star crew to create “Every Moment is Vital,” a video montage of Aniston examining holistic wellness. Directed by “La La Land” creator Damien Chazelle and composer Justin Hurwitz, plus celebrity photographer Cass Bird, the spot is like a visual scrapbook of an idyllic day in Aniston’s life told through textured and varied film styles. 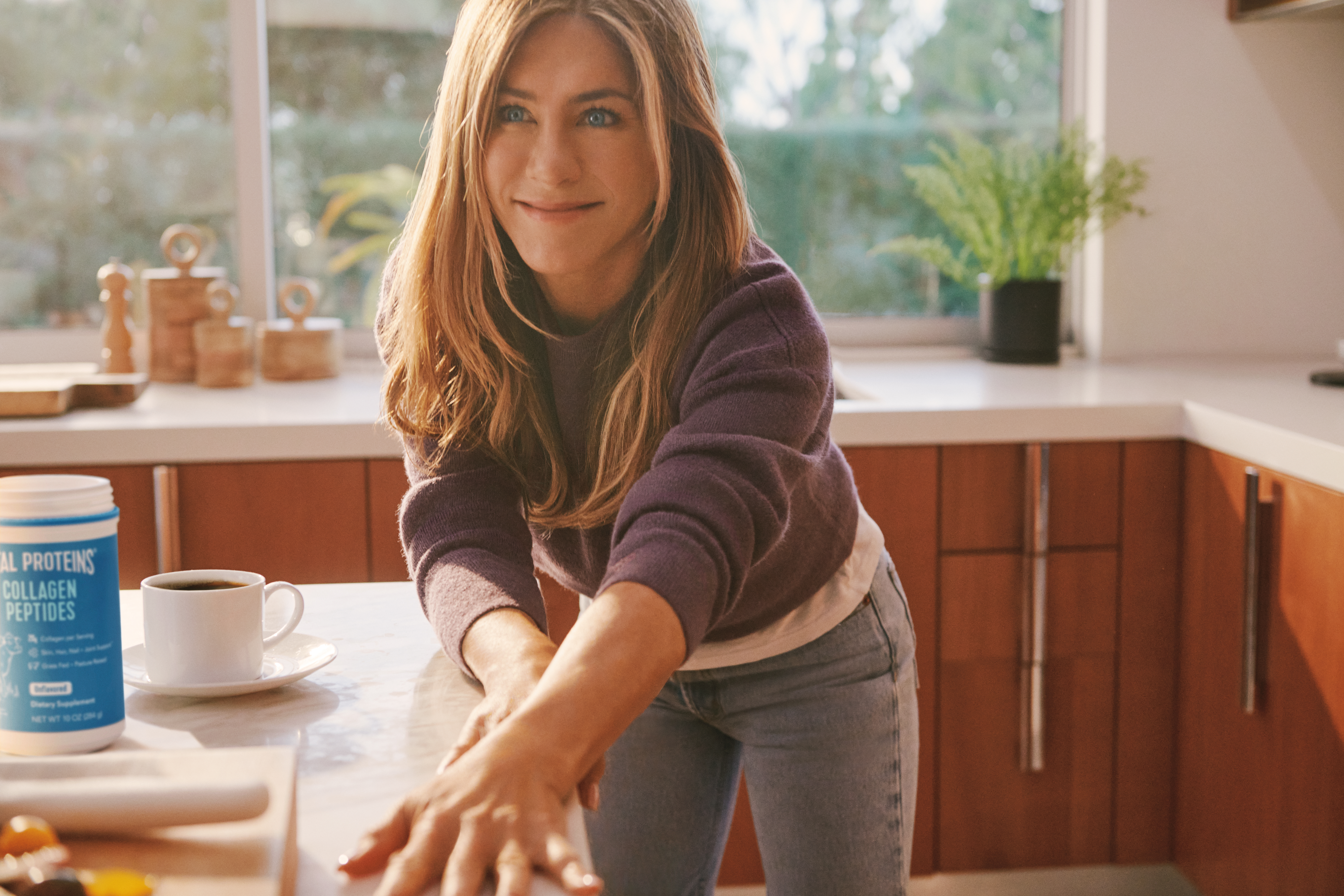 “What keeps me vital?” Aniston asks in voiceover. Rather than hitting viewers over the head with the collagen bars, the answers are more reflective: “meaningful work,” “play,” “silent mode” and, of course, “friends.” Throughout the film, which culminates in the tagline “every moment is vital,” the actress showcases her ideal daily routine and never-before-seen personal photographs.

“It's so beautiful. It's sort of the anti-ad, as I love to call it,” Aniston told Ad Age. “It feels like you're a voyeur on this beautiful day in the life and shot with all these different film formats just made it look beautiful.”

Aniston recalled the two-day shoot being so easy and fun, featuring lots of yoga, drinking shakes and playing with her dogs. “I felt like I was at home, just with like 65 other people and cameras running,” joked Aniston. “I don't know how people that live with a camera on them all day long can actually do it.”

The campaign, according to Halama, is a perfect example of Vital Proteins’ evolution, starting as a post-run supplement, but becoming more inclusive as the pandemic has changed the definition of wellness to include mental and physical health.

“We're not just saying, ‘The only way to be a good Vital Proteins consumer is to look and feel a certain way,’ so how can we really be a much more wellness-centric brand?," she said. "And that wellness-centric is really giving you pause and celebrating all the little moments that contribute to your overall health and wellness.”

The Vital Proteins & Jennifer Aniston Bars will launch in stores on May 23. The "Every Moment is Vital" campaign will air across broadcast, streaming, out-of-home, digital and social media and will also feature Vital Proteins users sharing their stories of health and well-being. 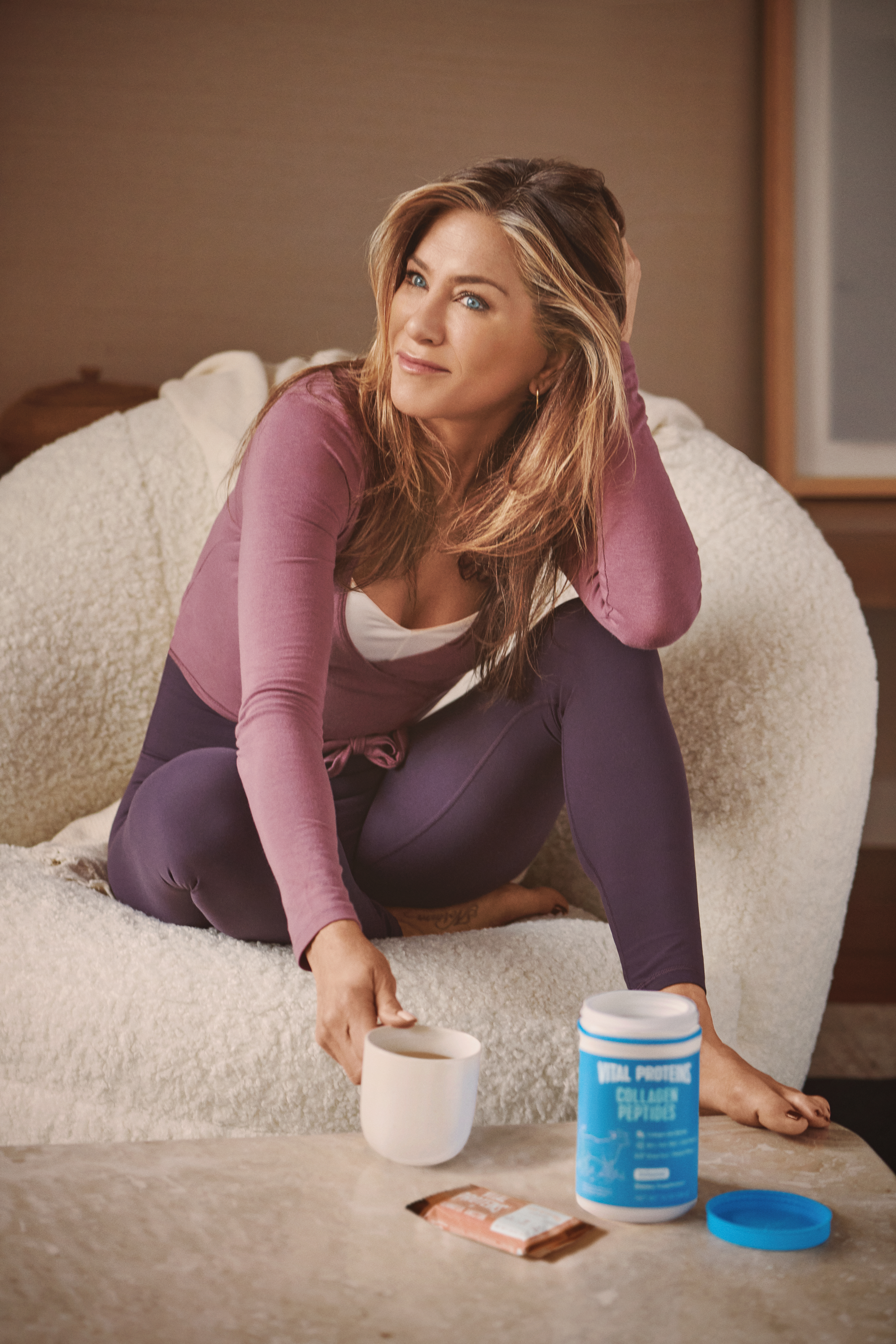