Trevor Noah, Gwyneth Paltrow also to star in game day push reminding consumers that you don't have to put everything it delivers in your mouth

Today, Uber Eats announced it will be returning to the Super Bowl for the second year in a row with the help of big-name celebrities. This time, however, they’ll be getting their munchies on with some very bizarre “food.”

A series of teasers the brand released today star Jennifer Coolidge, known for her comedic roles in “American Pie” (Stiffler’s mom), “Legally Blonde,” and more recently, HBO’s “White Lotus”; “The Daily Show” host Trevor Noah and actor and Goop founder Gwyneth Paltrow. In each, the stars receive non-food deliveries via Uber Eats such as makeup, deodorant and a candle—yet they go ahead and eat them anyway.

The teasers will be running online and on broadcast. The 30-second Super Bowl ad will run in the second quarter of the game. According to Uber Global Executive Creative Director Danielle Hawley, it was a “no-brainer” for the brand to return on game day this year. For one, the Super Bowl is a huge day for delivery, but it also presented an opportunity to communicate how the brand’s business has evolved. “Over the years, Uber Eats has quickly grown from a platform to get your favorite takeout, to a one-stop shop for anything you need—from beauty supplies, to alcohol to pet products and even more," she said.

See which brands are buying ads in Super Bowl 2022.

That evolution makes the brand’s moniker a bit of a misnomer—an insight that drives the humor of the campaign. “We wanted to use this year’s Super Bowl creative to kind of poke fun at ourselves,” Hawley said. “Because now that you can get anything, our service and our name no longer match. We’ll bring a lot of levity to the game as we watch some of our favorite celebrities eat lipstick, a candle, all because Uber Eats has made things confusing.”

Though customers are no longer locked down at home, Hawley said that the pandemic helped to instill new habits in consumers and boost delivery use cases. Today, nearly 3 million consumers order essentials beyond food delivery. “That’s why in our second Super Bowl campaign, we’re betting big on this growth,” she said.

The campaign, titled "Uber Don't Eats," was again created out of Special Group U.S., the agency behind the brand's Super Bowl debut with Mike Myers and Dana Carvey resurrecting their iconic roles and Wayne and Garth of “Saturday Night Live” skit and movie “Wayne’s World” along with an appearance by Cardi B, as well as the stateside “Tonight I'll Be Eating” ads starring unexpected celebrity duos including Elton John and Little Nas X and Sir Patrick Stewart and Mark Hamill.

This time around, the agency and brand tapped Jake Szymanski of Gifted Youth to direct the campaign. Szymanski made an appearance behind the camera at last year’s game directing GM’s ad with Will Ferrell bullying Norway. 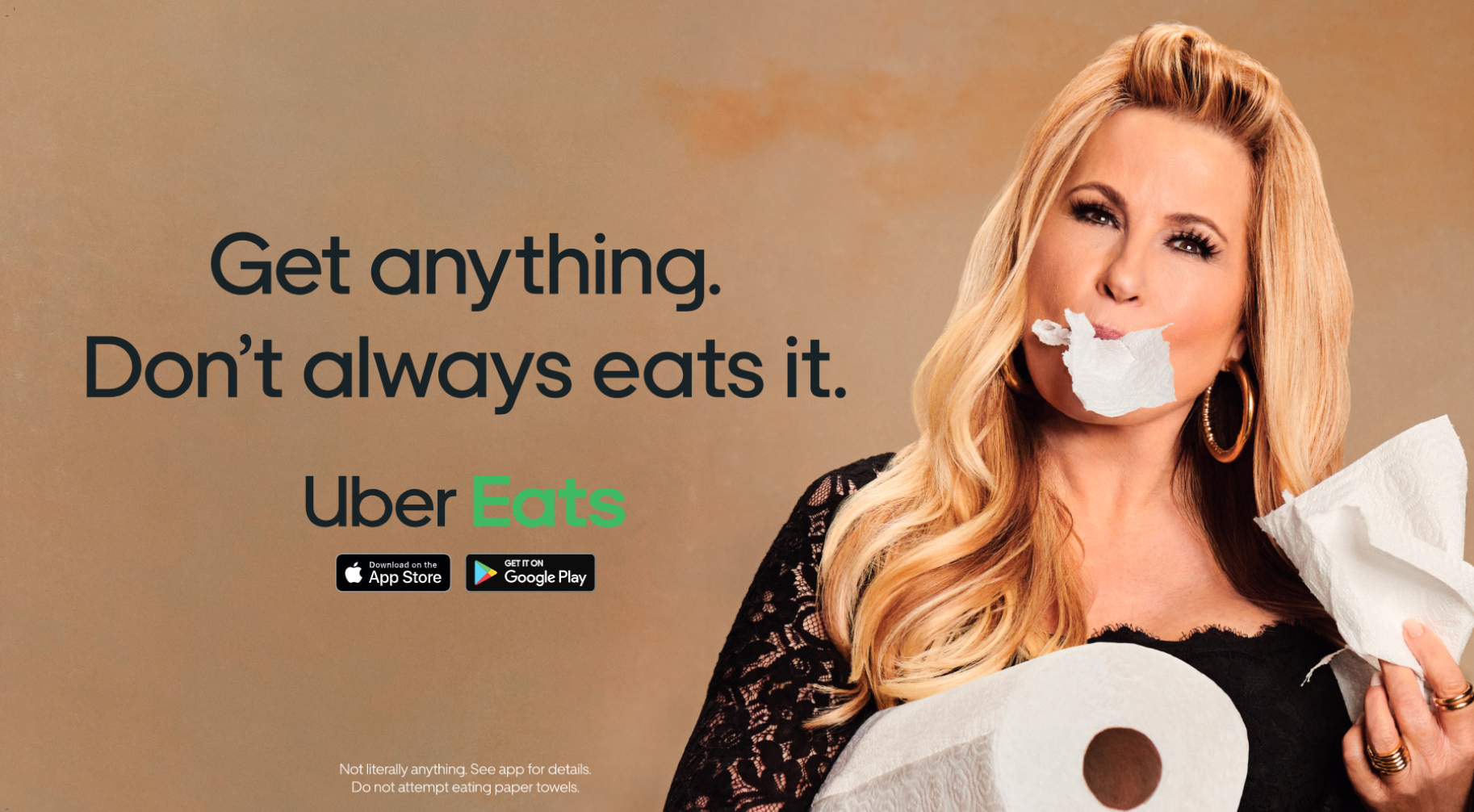 As to whether the confusion around the brand's name and offerings will eventually lead to a new moniker, "I think we're gonna have to wait and see," Hawley said. "Our biggest concern was just landing the fact that people understood that while our name has not changed, our service has. It does open the door for us to have those conversations, perhaps with our eaters as well."

Hawley noted also that the Super Bowl ad is just the start of a push extending beyond game day, hinting at yet another potential surprise. “It was not lost on us that Super Bowl Monday also happens to be on Valentine’s Day, which is just absolutely setting so many people in the United States up for failure,” Hawley said. “Luckily, Uber Eats has our backs.”

Uber Eats: Uber Eats' theatrical courier will get you so excited about your miso soup