For many, this holiday season marks the first that will reunite family and friends after the pandemic canceled gatherings last year. That means double the excitement, double the celebration and, perhaps, double the food.

The grocery chain’s “Doubly Special Dinnerware," created with agency of record DDB, features bowls, plates, platters, gravy boats and other serving pieces beautifully crafted like grandma’s china. The gleaming white dishes feature a rich, blue floral pattern around the rim. The florals swoop into the center of each item to create Kroger’s new “fresh cart” logo, which debuted in September. But in the spirit of making up for lost celebration time from last year, the dishes do double duty—each item is double the size of its traditional counterpart, fusing together individual pieces to hold twice the feast and spread two years' worth of holiday cheer.

The campaign includes a TV spot featuring the dinnerware. As the camera glides smoothly over the curves and contours of the conjoined dishes like room-temperature butter, a suave narrator dramatically announces, “This holiday, make up for last year by celebrating two years of special moments, two years of conversation and secret family recipes—at the same time!”

The campaign aims to remind consumers, in an offbeat way, what makes Kroger stand out from other chains, at a time when grocery stores had become symbolic of pandemic frustrations, said DDB New York President Darla Price.

“There was some conversation just around how people started to fall out of love with their grocery stores,” she explained. "For many of us over the last two years, we're waiting in lines in the middle of the pandemic. It became very functional. That's where Kroger sets themselves apart from other grocers."

The company and its offerings, she said, inspire love from its fans, so the challenge was, "How do we tie that brand love to a cultural moment, being the holidays, and the gap that exists right now in the marketplace, but in a super unexpected way?” Price said.

Emily Hartmann, director of brand building at Kroger, noted that consumer feedback her team found had revealed a common theme among Kroger’s shoppers, that nothing will stop them from throwing an extra-special holiday celebration this year. 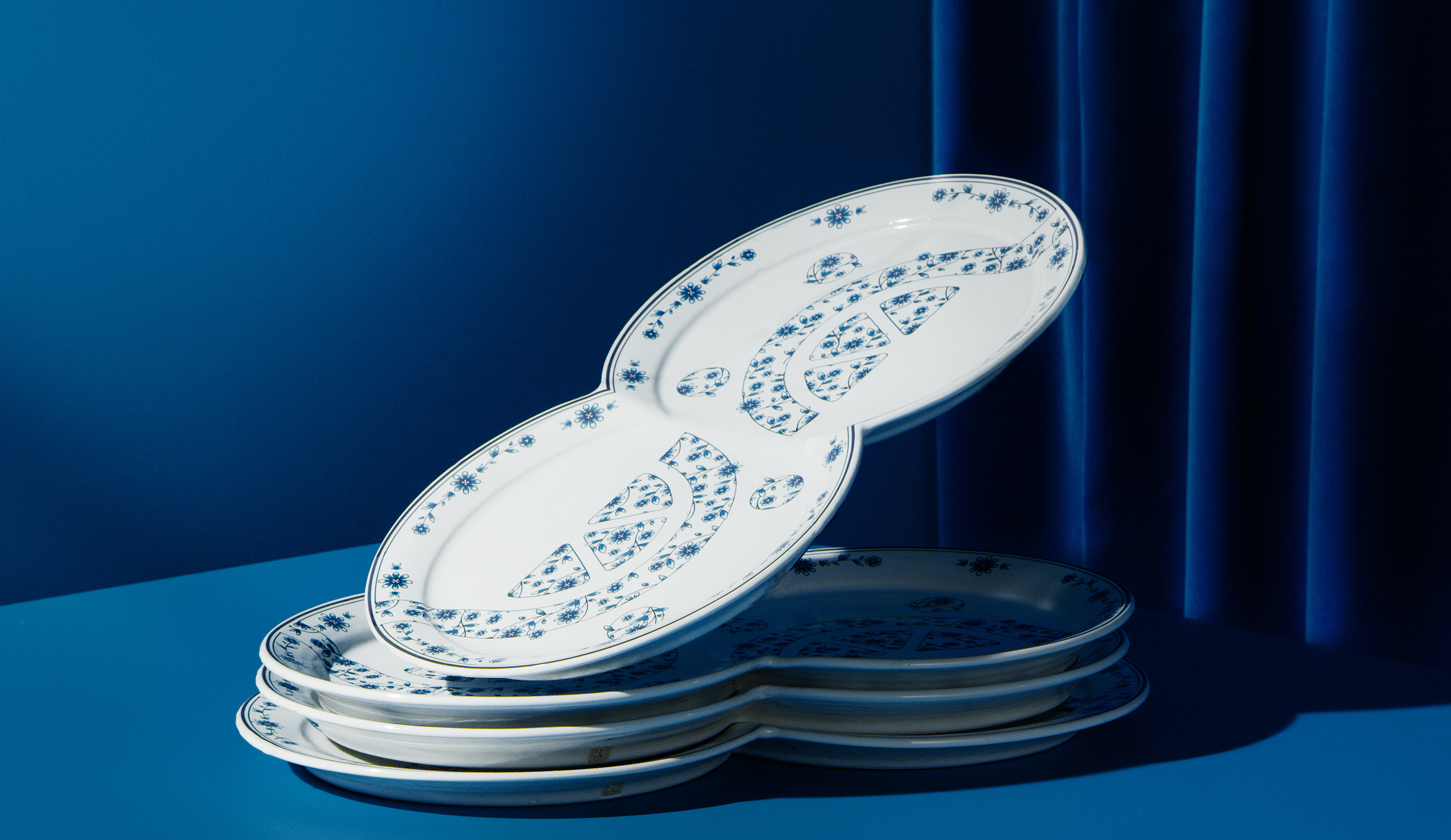 Mat Bisher, who was hired as chief creative officer at DDB NY this September, said that the dinnerware idea aims to break through what promised to be an especially "cluttered landscape" of holiday ads coming out of the pandemic.

"We really did need to have something unexpected and something that ultimately would catch people's attention and have a bit of a stopping power when you see it," he said.

The ceramics, which fuse the classic elegance of fine dinnerware with a contemporary twist, were crafted by master ceramicist David Kim, who specializes in table settings for Michelin Star restaurants. In a short making-of documentary, Kim said that he “wanted to blend the functional and the sculptural, something familiar but also it has enough uniqueness in the form that creates a sense of curiosity as well.”

Throughout the holidays, the dishes will be featured on social content from food experts, recruited with agencies Dentsu and 360i from the Food Network, as well as influencers including Dzung Lewis, Matt Robinson and Kolby Chandler. The influencers will share recipes and hosting tips on their own channels.

“As we always say, it's great to have a combination of a cultural insight and a product insight,” said Price. “We're in a moment in time with this pandemic where we've all waited to get together with our families and what better way to connect that cultural piece than to have Kroger...with this tongue-in-cheek, unexpected piece of work.”

As to whether Kroger's "Doubly Special Dinnerware" will be available to consumers, Bisher said, "We have a bunch of these that ultimately might make their way into the hands of people." 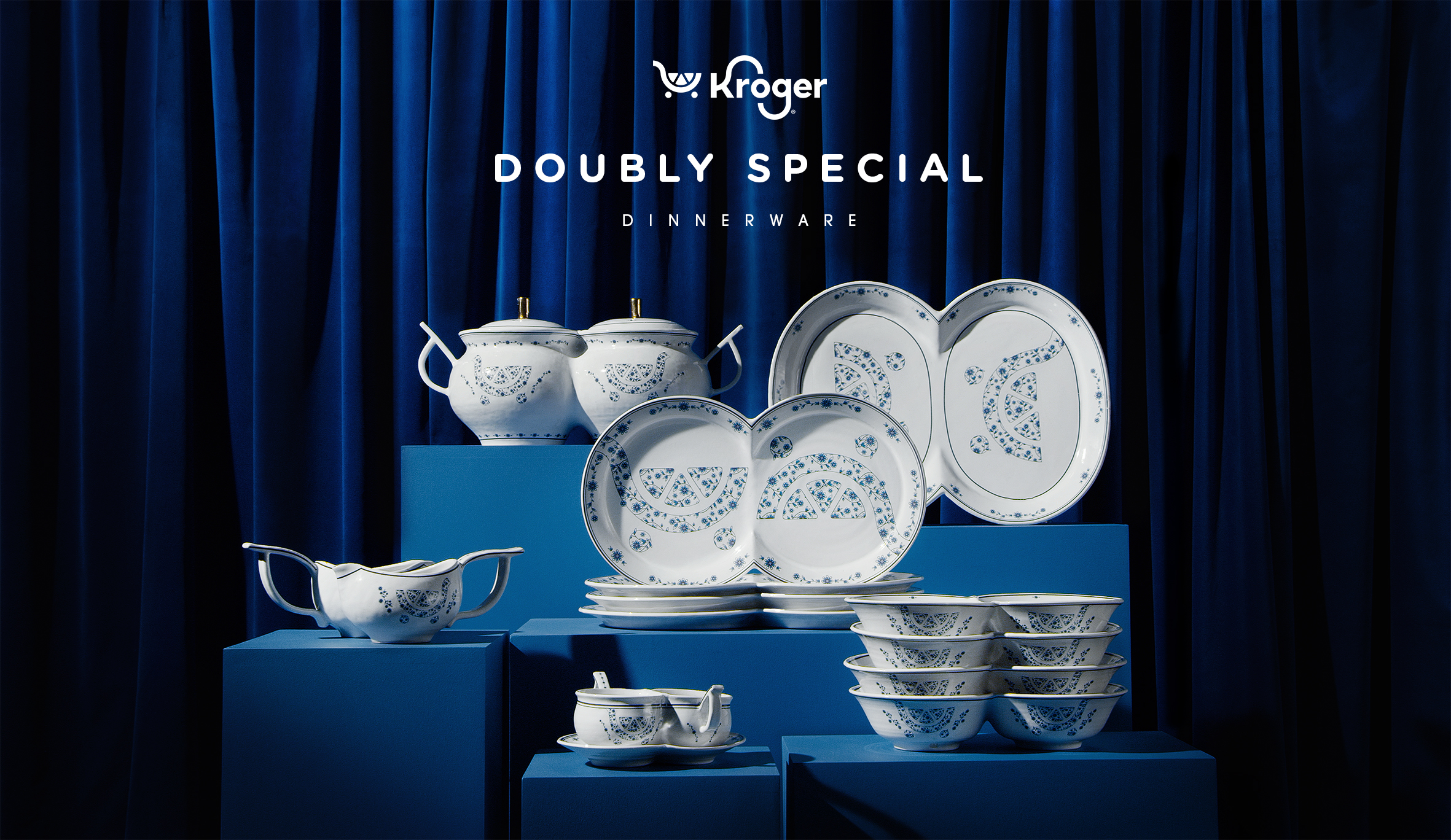