In an extension of its 'Thank You Meals' campaign, fast feeder adds a virtual presence to the nightly cheers with 110 clapping hands emoji

Each night, as cheers, claps and songs for healthcare workers are heard across New York City, McDonald’s is replicating the effort on Twitter with patterns of the clapping hands emoji.

The McClap tweets were suggested by creative agency Wieden+Kennedy New York as a social media extension of the chain’s “Thank You Meals” campaign.

For two weeks, McDonald’s is giving meals to first responders who visit its restaurants as a way to thank them for their efforts. “Thank You Meals” come in its Happy Meal boxes and include thank you notes. McDonald’s replaced other TV spots with two ads focused on the meals as part of the big push. And it began posting its virtual claps, or McClaps, for healthcare workers on Twitter.

The tweets go up right around 7 p.m. EDT as a way for McDonald’s to participate virtually in the salutes to healthcare workers heard across cities such as New York.

“It was such a simple way to tap into something that’s happening in culture,” says Jennifer Healan, VP of U.S. marketing at McDonald’s.

Sets of clapping hands, 110 in each tweet, are shown in various skin tones as symbols of people thanking first responders. Look closely, and it’s clear that McDonald’s Golden Arches appear nightly, in the form of the yellow hands.

The agency painted the picture “in the Internet’s native tongue,” says John “JP” Petty, head of social strategy at Wieden+Kennedy New York. The logo, he says, is secondary to saluting the front line workers.

And fans are noticing the messages, even if many don’t immediately spot the arches or the connection to the salutes to frontline workers. McClap is McDonald’s second-most engaging tweet of the year, behind one for the return of the Shamrock Shake. The average positive engagements with the McClap tweets, including likes, retweets and positive comments, are five times higher than McDonald’s historical benchmark, says Petty.

While McDonald’s is doing some other posts, including one on April 28 that noted it has already distributed nearly 4 million of the meals, “the focus is on the McClap for the next week or so,” says Petty.

Twitter being Twitter, plenty of people have posted that they are less pleased with the effort, perhaps not getting the attempt at a subtle message. The tweets receive responses that suggest McDonald’s contributes to obesity, that it doesn’t pay its restaurant employees enough, and even replacing the clapping hands with 110 middle fingers. Healan and Petty acknowledge that some people are not responding positively to the posts, and prefer to focus on the people who want to cheer along with the brand.

“I need to turn the notifications off, honestly,” says Petty. “We love how it’s performing.”

McClap is not the first social media campaign to amplify the Golden Arches during the coronavirus pandemic. In Brazil, McDonald's separated the famous logo in March for social posts, then removed the imagery a few days later. 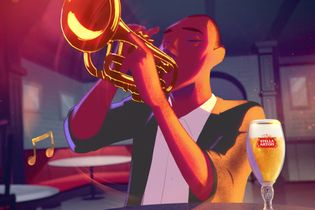 Stella Artois encourages you to sample the 'Life Artois' in a nostalgic, art-filled campaign

McDonald's: McDonald's highlights the work of Black activists at the BET Awards

McDonald's: McDonald’s issues a silent video statement in tribute to George Floyd and others