What would your teenage self think of your life? Mercedes-Benz explores the idea in this engaging spot | Ad Age
Skip to main content
CREATIVITY
Sign In Register

Buying a sporty car has always been thought of as the emblem of a mid-life crisis. But in a new global campaign by Mercedes-Benz, promoting its CLA Coupé, the epiphany comes when a jaded thirty-something guy meets a teenage version of himself.

The five-minute online film, created by Mercedes' lead European creative agency Antoni Garage, begins with the man discovering his 16-year-old self raiding his fridge one night. After a ride in his CLA Coupé—during which the teen is unimpressed by his older self listening to boring stock market reports instead of wild music—they go to his office, where again the younger version is horrified by his older self focusing so much on work and passing up an opportunity to go on a date with a colleague. Finally, the two manage to connect and have some fun together, and it concludes with the man seemingly inspired to take another look at his work-life balance. Meanwhile, his erstwhile date meets her own teenage self in the kitchen.

Shot in Miami, the film was directed by Francis Rousselet, who is known for his music video work with the likes of Kanye West and Madonna, via production company Anorak Berlin, and is set to the soundtrack of "Just Like Honey," by the Jesus and Mary Chain.

The tagline of the campaign is "Play by Your Rules" and Mercedes says it's about embracing your own individuality, tying in with the wider marketing message behind the CLA Coupé.

"The film speaks the language of a young, confident target group which is true to itself," says Bettina Fetzer, director marketing Mercedes-Benz Cars. "We are concentrating more on entertainment than classical advertising here. The film is bold and emotional, without taking itself too seriously."

As part of the campaign, Mercedes has introduced its first branded Instagram augmented reality filter; the #PlaybyYourRules filter has a neon look that reflects the film as well as the accompanying print campaign, which was shot in Tokyo by fashion photographer CG Watkins. 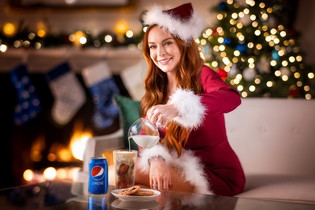