Popeyes is giving out-of-work musicians the chance of a gig, saying it will hire some of them to record its “Love That Chicken From Popeyes” jingle for use in commercials.

At first, the idea was to hire musicians in New Orleans, the fried chicken chain’s hometown, where jazz clubs and other establishments are shuttered due to the coronavirus pandemic. But Popeyes soon realized that musicians are looking for work nationwide, so it’s searching broadly for people to record videos of their takes on the jingle for a chance to be selected.

The chosen musicians’ work will be used in TV and radio spots. Popeyes says it will pay a one-time fee to the musicians for the use of their recordings, but declined to divulge the payment terms.

While other restaurants are struggling to stay afloat, Popeyes is still selling lots of those chicken sandwiches as well as plenty of family-sized meals. After a blip in business in the last two weeks of March, when sales were about flat with a year ago, Popeyes’ daily same-store sales returned to pre-COVID-19 levels by the end of April, parent company Restaurant Brands International said on Friday.

Popeyes' first-quarter sales at longstanding locations rose a staggering 26.2 percent and were up 29.2 percent in the U.S. Even Restaurant Brands used the word “remarkable” to describe the 32.3-percent jump in first-quarter systemwide sales at Popeyes, gains unseen anywhere else, including at sibling chains Burger King and Tim Hortons, or at competitors such as KFC.

Popeyes is asking musicians to submit their recordings through social media with the hashtag #LoveThatJingle.

The campaign includes an online video showing the empty streets and clubs of New Orleans and there's a full-page ad running in The Times-Picayune featuring the sheet music to the tune. It comes weeks after Popeyes raised money for a New Orleans-area food bank through its NOLA Strong campaign, which included an online video voiced by New Orleans actor Wendell Pierce.

The work comes from Gut, the chain's creative agency of record. 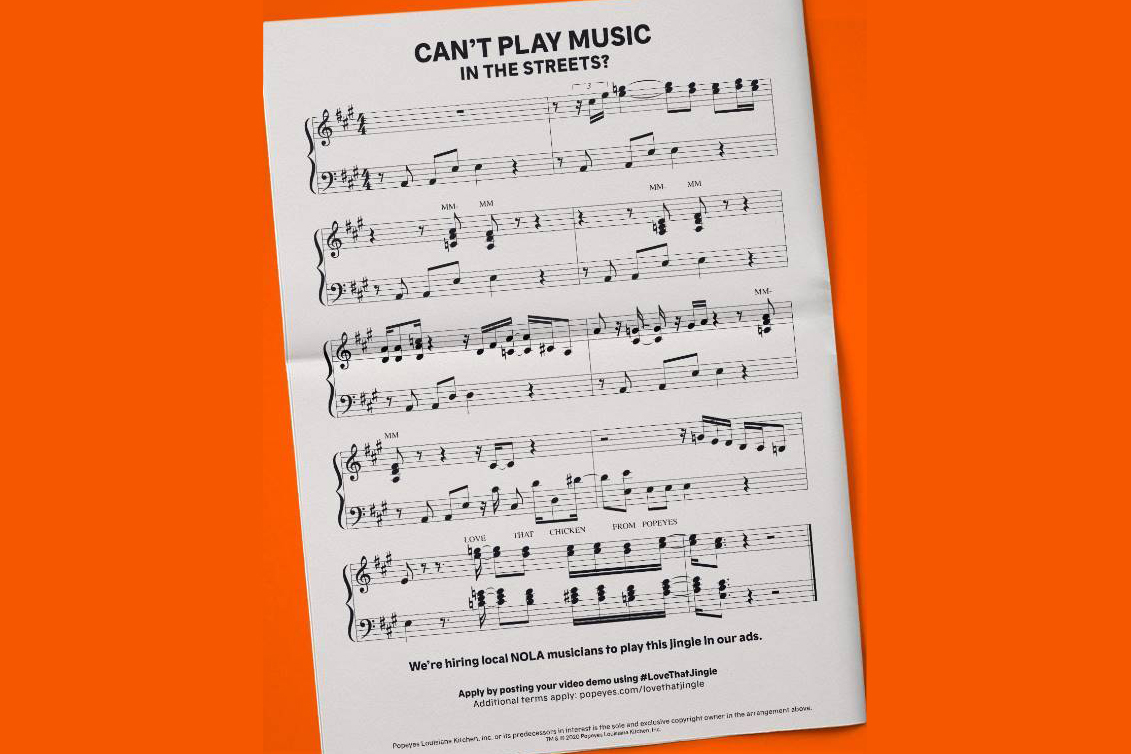 Popeyes: Popeyes celebrates one year of its chicken sandwich by counting down to the end of 2020

Popeyes: Popeyes tries to infiltrate family chats to get them to order chicken