Push from Gut reminds consumers which one is open on Sundays

As it brings back its hit fried chicken sandwich, Popeyes Louisiana Chicken is taking a direct shot at Chick-fil-A’s decision to be closed Sundays.

In August, Popeyes hailed the sandwich as its biggest launch in 30 years. That said, not even Popeyes predicted the frenzy. It ran out of the sandwich in about two weeks, roughly a month before it expected to do so. Popeyes restaurants around the country saw unheard-of crowds. Diners turned away in disappointment after learning the sandwich was nowhere to be found, even though Popeyes still had plenty of other fried chicken. Interest in the sandwich was spurred in part by social media, including when Chick-fil-A promoted its own sandwich on Twitter on Aug. 19, leading to a “... y’all good?” response from Popeyes.

Now, Popeyes is ready for a comeback. Its $3.99 sandwich will officially return on Sunday, Nov. 3, which happens to be National Sandwich Day, according to the various calendars that keep track of such made-up celebrations.

An “Open Sundays” online video shows a man walking up to a roadside sign listing six restaurants: McDonald’s, Burger King, Subway, Chick-fil-A, Popeyes and Taco Bell. The words “closed Sunday” appear on the Chick-fil-A section of the sign, highlighting the chain’s practice of closing Sundays. He then walks up and places an “open Sunday” sticker on the Popeyes portion of the sign—right next to Chick-fil-A.

Print ads—slated for Oct. 29 in newspapers including the New York Times, New Orleans Advocate and Chick-fil-A’s hometown paper, the Atlanta Journal-Constitution—also emphasize the Sunday availability, with copy that reads: “Y’all … The Sandwich is back this Sunday. Yes. Sunday.”

Popeyes is clearly trying to have fun with the effort. Its press release mimics Michael Jordan’s comeback press release from 1995 that simply stated: “I’m back.”

This time around, Popeyes is confident it will have enough product to meet demand, says Bruno Cardinali, Popeyes head of North America marketing—adding that franchisees have been working on increasing staffing levels to be ready. 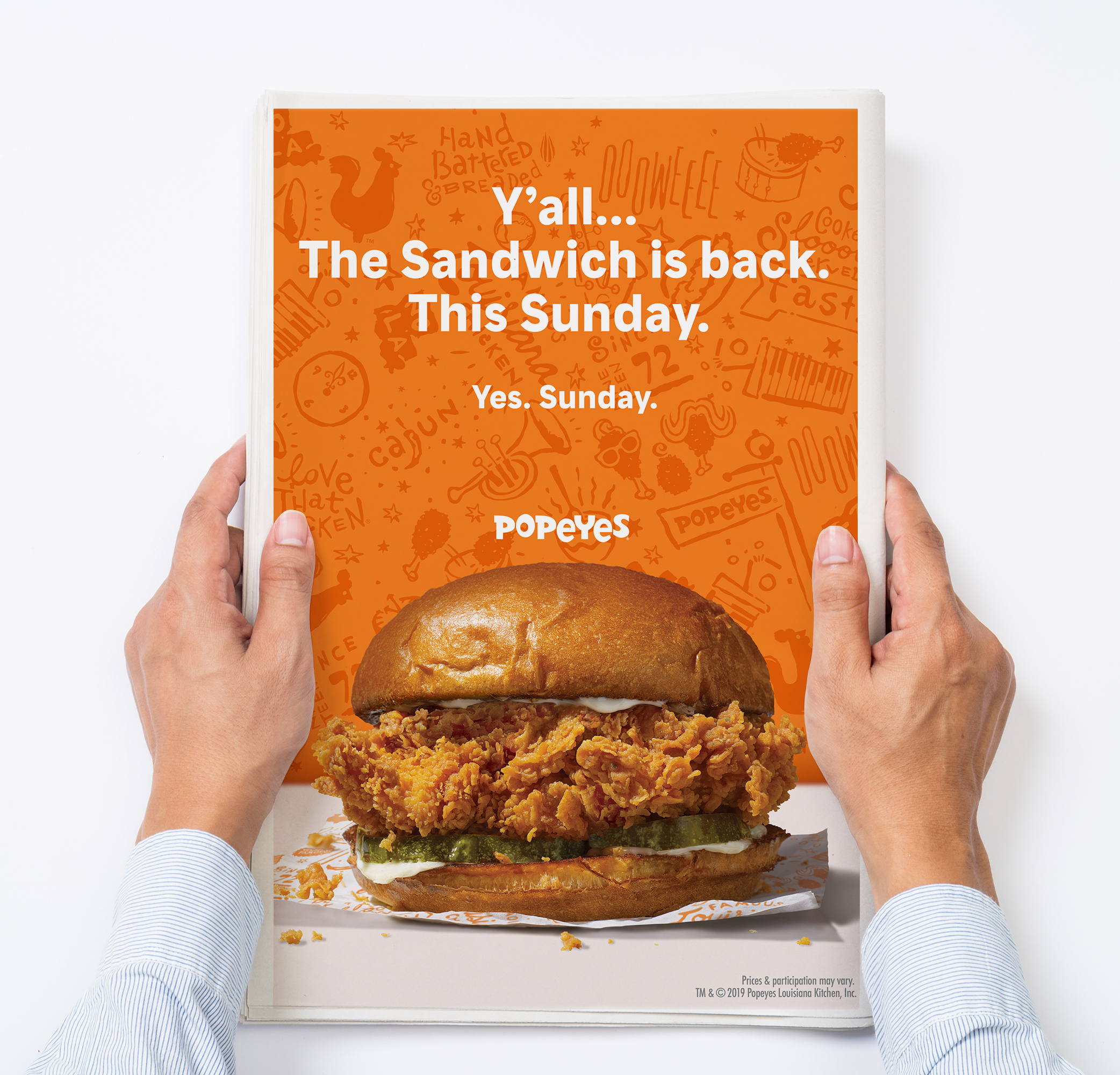 Popeyes: Popeyes teaches you how to make chicken sandwich tacos on TikTok