If you’re looking for a rabbit hole to dive into, look no further than Qai Qai, the baby doll with 338,000 Instagram followers. The doll belongs to Olympia Ohanian, daughter of tennis superstar Serena Williams and Reddit co-founder Alexis Ohanian. They lovingly refer to her as their "granddaughter," and she's garnered enough media attention to give Gramps and Granny a run for their money.

In a bizarre interview for Oprah Daily, which includes many images of the doll and Gayle King conducting business at O Magazine, Qai Qai explained her hope that as a doll of color, she hopes children will see in her “something that looks, feels, or is shaped like them,” a sentiment Williams has expressed many times as the reason she introduced the doll to her daughter in the first place.

Now, Qai Qai boasts hundreds of thousands of social media followers (she credits digital animation group Invisible Universe for her success), a line of replica dolls available on Amazon and, as of today, a partnership with Adobe to celebrate International Daughter Day this Sunday.

The collaboration manifests in a digital coloring book featuring Qai Qai putting her many skills to use in careers like fashion design, film editing, game developing, structural engineering and small business ownership. The goal of the project, according to Ohanian’s dedication page, is to “encourage our kids to try new things and find role models they can identify with.” 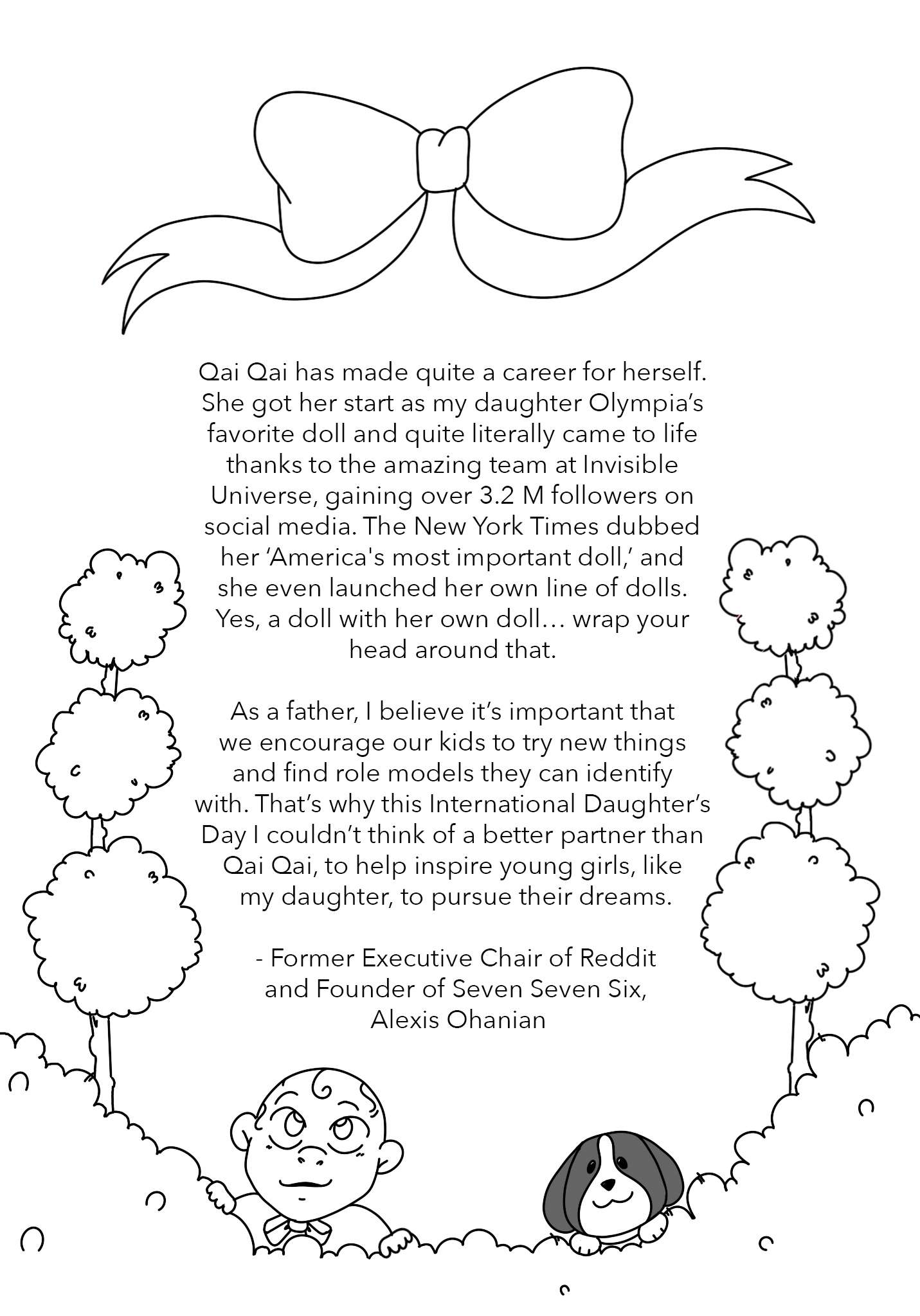 In the partnership's social media launch video, an animated Qai Qai wanders through an empty blue room wearing a tutu, t-shirt and bow around her neck. Illustrations that pay tribute to the careers the doll will encounter with the coloring book swirl around her, taking the form of a paintbrush, scissors, rocket ship and paper airplane. As a red heart floats by, Qai Qai taps it and it transforms into the Adobe logo.

The coloring book's art is by illustrator Winsome Reid and can be downloaded from Adobe’s blog post and integrated into Adobe Fresco, Illustrator or Photoshop to color.

"It's hard growing up in a world where Black girls in the media often only exist as sassy sidekicks to their usually more developed white leads (if we are even portrayed at all),” said Reid in a statement. “When stories do center us they often favor narratives of struggle and discrimination. And those stories are important of course, but I think we deserve more than that. We deserve stories that show us in all our many forms. Silly and serious. Smart and ditsy. Cool and nerdy. Tomboyish and girly and all that exists in between. We deserve action, adventure, romance and fun! That's what I want to do with my art. To let Black characters, especially Black girls, take the lead and show the spectrum of personalities, talents and interests we can have as well as the diverse range of stories we can be in. I'm so glad characters like Qai Qai exist to be an inspiration to a generation of kids who get to see themselves front and center and not on the sidelines. And I love that this book will let kids imagine themselves in a variety of roles we are rarely shown we can fill."

The Qai Qai coloring book is only the most recent in a line from Adobe that started in 2020. All featured artists can be explored on Adobe’s coloring book landing page.

Adobe: Delta and Adobe team up to diversify the 'faces of travel'

Adobe: A night at home becomes a magical adventure via Adobe's edit tool