Reddit and R/GA, th agency of record for the company, launched a new marketing push in time for Pride Month. It features billboards promoting LGBTQ+ communities and other diverse subreddits in a campaign called “Maybe Together We’ll.”

On Tuesday, Reddit revealed the billboards in New York, Chicago, San Francisco, Los Angeles and Toronto, along with a video that highlights all the communities on Reddit, which are known as subreddits. One billboard shows all the types of subreddits for the LGBTQ+ community on the site, which Reddit said represents 14% of the user base. There are more than 100,000 subreddits devoted to broad and hyper-specific interests.

“This year more than ever, the world has seen the power of online communities to drive real world action,” said Reddit CMO Roxy Young in the campaign announcement. “’Maybe Together We’ll' is a celebration of this spirit and an opportunity for us to showcase the communities, users, conversations and shared experiences that make Reddit such a special place.”

Reddit has been with R/GA, a part of Interpublic Group, since last year, when it picked the agency to lead its creative ad strategy. The relationship was quickly challenged by the COVID-19 pandemic, which interrupted Reddit’s initial plans for a major marketing push last summer.

Reddit and R/GA had to retool some of marketing concepts to make them more relevant for the times, like so many brands had to do. In May of 2020, Reddit and R/GA put out a video homage to the user base titled “Thank You,” and it was the first piece of a campaign called “Dive Into Anything.” Reddit used that campaign to showcase the plethora of communities and interests on the site.

Reddit has 52 million daily active users and the company has been making strides in advertising, predicting it would reach $1 billion in ad sales by 2023. Also, last year, Young was promoted, from vp of marketing to chief marketing officer.

Reddit has been lauded for parts of its marketing in recent months, in particular, with regards to its handling of the rise of “Wall Street Bets,” which was a community that rose to international prominence by investing in “meme” stocks. The wild subreddit took credit for propelling the value of stocks like Game Stop and AMC, and it captured widespread public attention.

In the new marketing push, Reddit hopes to highlight other, perhaps lesser known communities, starting with the LGBTQ+ subreddits like “r/gaymers,” “r/TransGamers,”r/NonBinary,” “r/ainbow” and “r/LesbianActually”—all getting shoutouts in billboards. 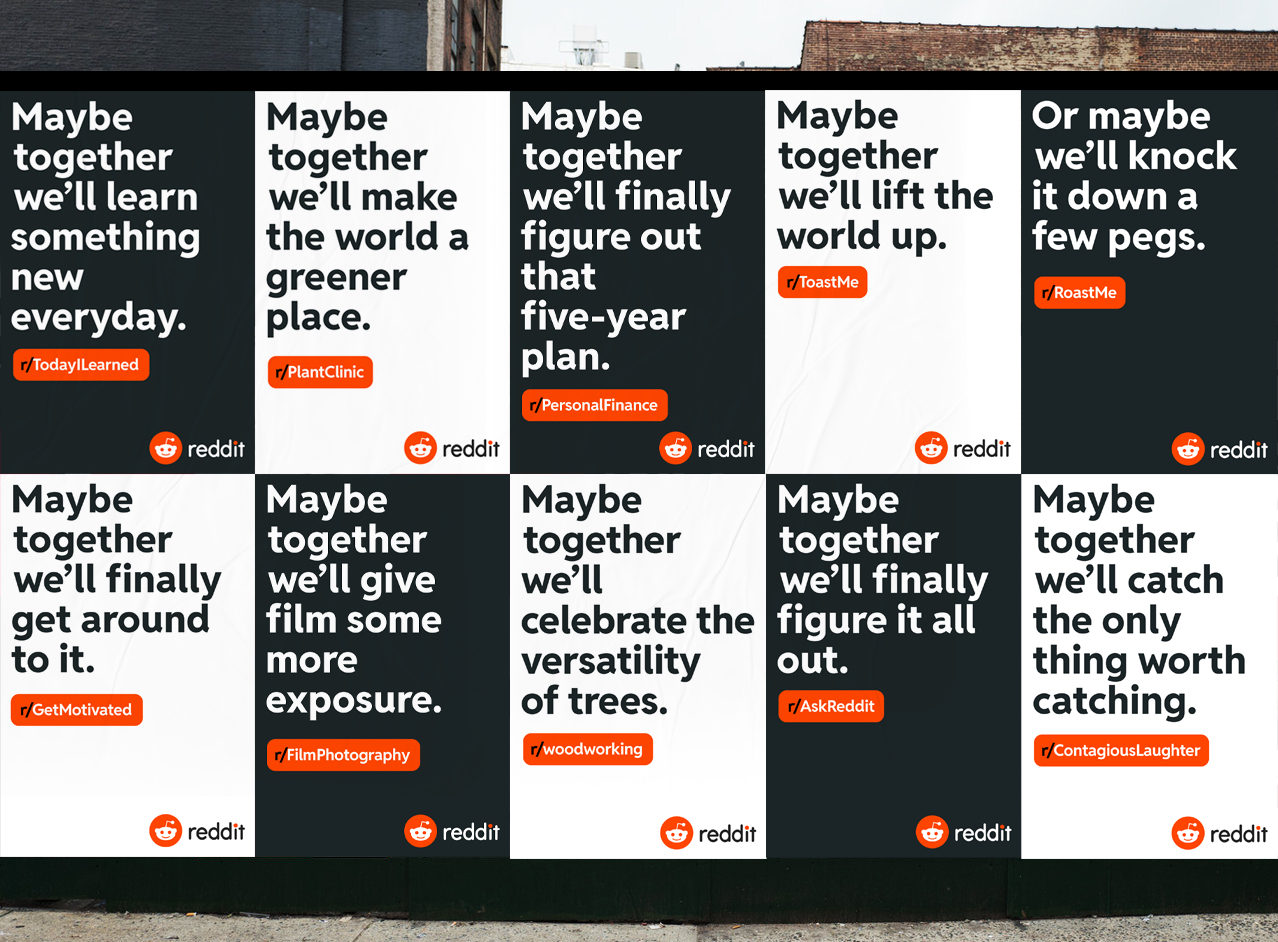 There also is a one-minute “hero” video that brings the communities to life, showing how people use Reddit to discuss shared passions, discover life tips and just show off. The campaign is a continuation of the “Dive Into Anything” concept from last year.

“Reddit communities have been thrust into the global spotlight this year and in the process more and more people have come to understand the power of this platform to shape and influence culture,” said Tiffany Rolfe, R/GA’s global chief creative officer, in the announcement. “We took a risk with our Super Bowl commercial earlier this year, one that paid off in so many remarkable ways, and it’s exciting to follow that success with a new campaign that dives deeper into the breadth and diversity of Reddit’s communities and encourages more people to discover what makes them so special.”