In the aftermath of the Uvalde tragedy, anti-gun violence non-profit Sandy Hook Promise has debuted an understated campaign demanding action.

A series of typography-driven TV ads and billboards created by BBDO New York promote the organization’s message that gun violence can be prevented if you know the warning signs. The spots juxtapose reactions to the tragedy with steps that everyone can be taking right now to prevent yet another tragedy.

“It seems absurd to me that school shootings seem to be just as accepted as inevitable, almost normal," said Gary Toit, SVP-creative director at BBDO New York. "With this work, as in everything we do for Sandy Hook Promise, we want to point out this absurdity, and shock or move people into taking real action. In this case, learning the signs to identify—and thereby stop–a potential shooter. In the absence of any help from Washington, it’s down to us to stop these shootings.”

Sandy Hook Promise was founded by family members of the victims of the 2012 shooting at Sandy Hook Elementary School in Connecticut. The organization has become known for its powerful, story-driven PSAs created with BBDO, including “Evan,” a love story with a dark twist, the disturbing “Back to School Essentials” fake back-to-school ad, as well as the more recent “Teenage Dream,” an unnerving re-interpretation of Katy Perry’s pop hit of the same name. The campaigns over the years have amassed 22 Cannes Lions. 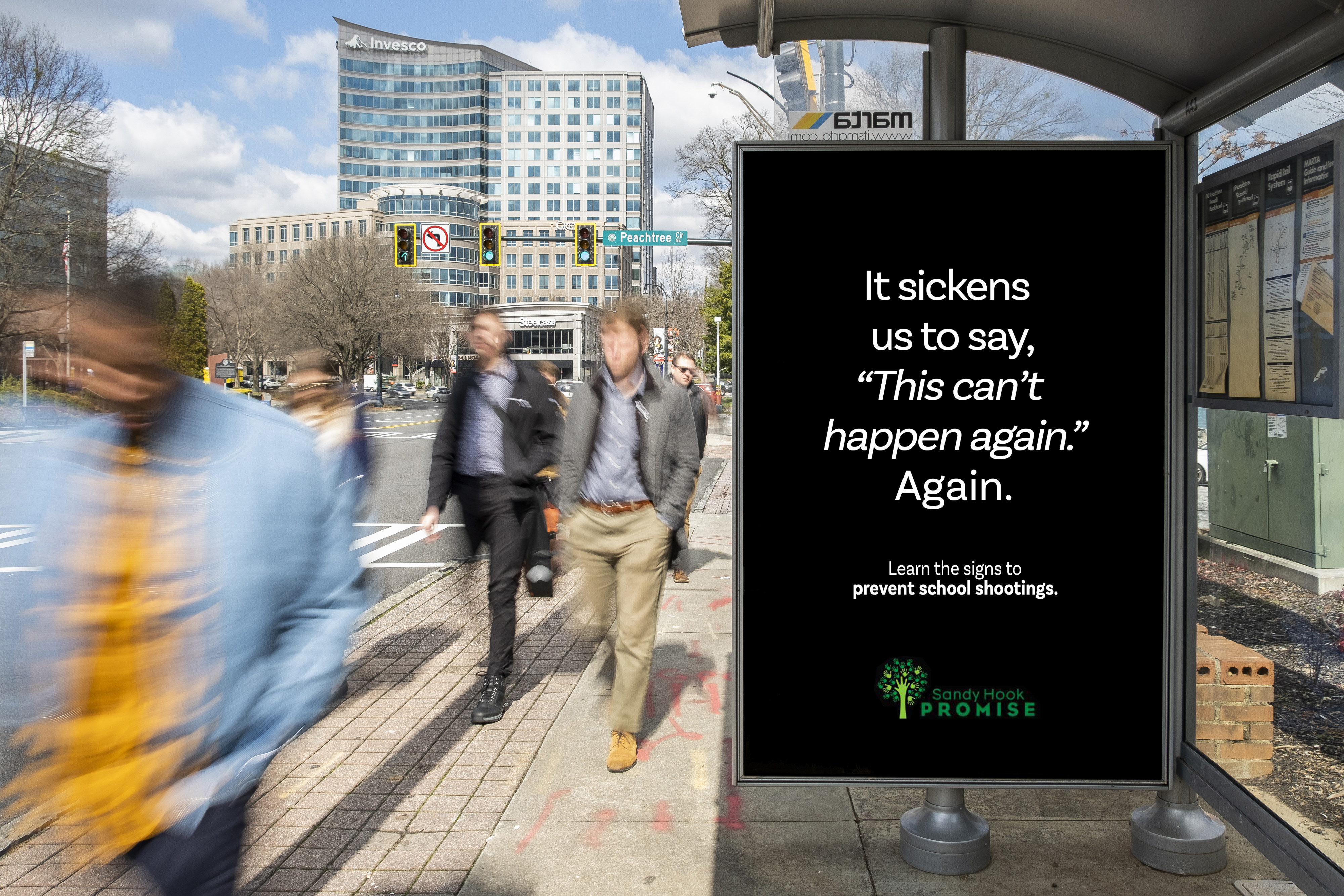 The new push, however, is noticeably spare, created in quick response to last week’s events. Teams at BBDO worked within a tight, four-hour time frame to come up with ideas, and Sandy Hook Promise VP of marketing Dawn Lyons then selected the concept of the text-driven ads.

The in-house production team at BBDO Studios then created multiple executions, dispersed across donated media from various partners, including Paramount, CNN, Discovery for TV; Wall Street Journal and People for print; Verizon and Spotify for digital publishing. Within 48 hours of briefing, the ads began running, with more to come this week. With help from the SHP Media Advisory Board and PhD, Sandy Hook Promise received about $300K worth of donated media, with 34 million impressions across the various platforms.

"These are not ads we like to make," said Lindsey Cash, SVP-account director at BBDO New York. “In the nine years BBDO has worked with Sandy Hook Promise, we have created 12 PSAs for them—far too many. But we’ll keep making them until all our children are safe from gun violence.”

Last week, March for Our Lives, another high-profile anti-gun violence nonprofit, also came out with its own message and resurfaced a stunt campaign it created for its fourth anniversary earlier this year, updated with statistics reflecting the Uvalde deaths.