Most brands go to great lengths to separate themselves from accusations that their product is tested on animals or associated with ultra-powerful business conglomerates. But, rather than condemning such claims, the DTC hosiery brand Sheertex is embracing these controversial statements to underscore the strength and durability of its tights.

In Sheertex’s “Alarmingly Strong” campaign, a series of images and videos of the brand’s tights being stretched, twisted and jabbed are coupled with attention-grabbing statements that reflect different scenarios showcasing the tights’ resistance to damage.

For example, in one visual, the phrase “tested on animals,” written in a capitalized, bright red font, overlays the image of a dog pulling at a tight-clad leg. Another ad juxtaposes the statement “supports big oil” with an image of several bottles of olive oil suspended in midair inside the leg of a pair of Sheertex tights.

“Sheertex is a brand that wants to be known for the strength in its tights,” said Katherine Homuth, Sheertex CEO, in a statement. “ At our core, we are a fabric tech company. We want our consumers to know the extreme measures that we have gone through to get our tights as strong as they are.”

This campaign marks the brand’s first venture into out-of-home advertising after several years of largely focusing its marketing efforts on social media since the Canadian brand's founding in 2017. Out-of-home displays, created in partnership with Brooklyn-based agency Red Antler and designed to make consumers do a double-take at their controversial copy, will appear on subway platforms and trains in New York City and Toronto. Additionally, video spots and graphics will also appear across Sheertex’s social media channels, with a 30-second commercial also set to air on television.

Red Antler previously worked with Sheertex in 2020 to revamp the brand, creating a “fearless brand system” similarly centered on demonstrating the strength of the material used in Sheertex’s tights, said Emily Heyward, co-founder and chief brand officer at Red Antler, in an email. Building off that previous partnership, the agency aimed to advance the concept of spotlighting the brand’s durable fabric—“made with the same polymers found in ballistic materials,” according to a press release—to focus on “stopping people in their tracks,” Heyward said.

“Sheertex’s willingness to throw caution to the wind and embrace controversy—even ironically—reinforces the fearlessness in the brand’s DNA,” said Jenna Navitsky, chief creative officer at Red Antler, in a statement. “We wanted to represent the toughness of the product by specifically choosing taboo headlines that most brands would never imagine using.”

These controversial statements have spurred “quite the (intended) stir” on Instagram, Heyward added, pointing to a post that depicts a stack of CDs straining against Sheertex’s tights with text reading “tested on endangered species.” Sheertex’s followers shared mixed reactions to the ad, with several applauding the play on words while others disapproved of the misleading pun.

But, despite the provocative phrases used in the campaign, Sheertex promises that “no tights, animals, exceptionally large cheese, olive oil, old TVs or pencils were harmed in the making of these advertisements." 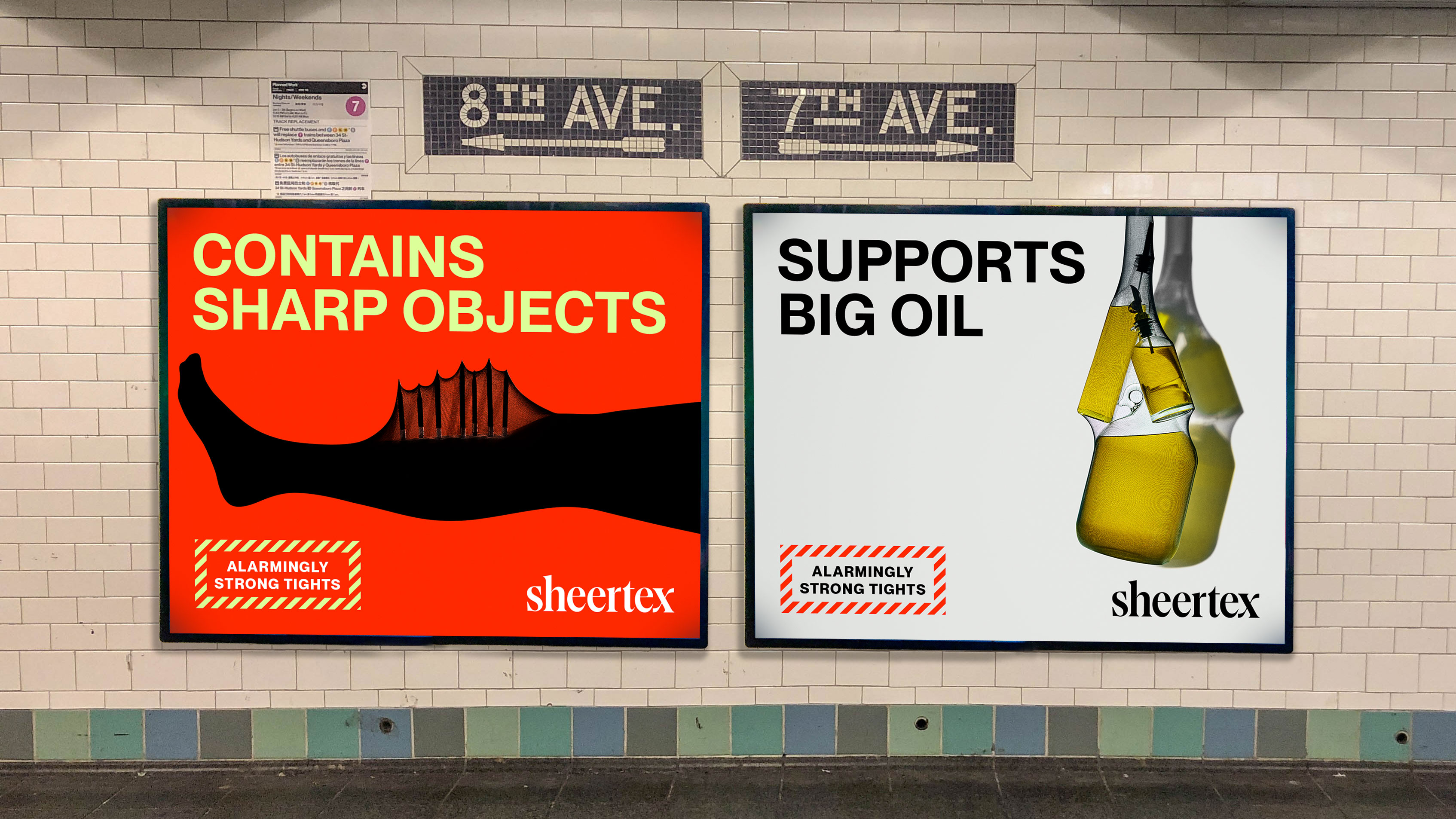