Taco Bell is ringing in its London debut with a timely stunt.

The fast-food chain is taking its signature "ding" sound to the city in an unusual manner--making it sound as if it's coming from Big Ben. Elizabeth Tower, best known by the name of its giant clock's bell, Big Ben, has been largely silent since undergoing major conservation work that began in August 2017. Scaffolding covers much of the structure and the iconic bells are only rung for special occasions.

So Taco Bell took the matter into its own experiential marketing hands, working with an audio engineer on a recording that mimics the sound of the Westminster chimes with an element of the Taco Bell "ding" thrown in. The sound isn't actually coming from the clock, but thanks to the magic of speakers, it seemed to be.

People near Big Ben could hear the new take on the old sound on Monday. Taco Bell plans to reveal to Londoners on Tuesday that it was the brand behind the gimmick.

"This was too perfect of an opportunity to not have a little bit of fun with," says Marisa Thalberg, Taco Bell's global chief brand officer. "It's, I think, a signature Taco Bell move in terms of how to announce ourselves in a bigger way in a relatively newer market." 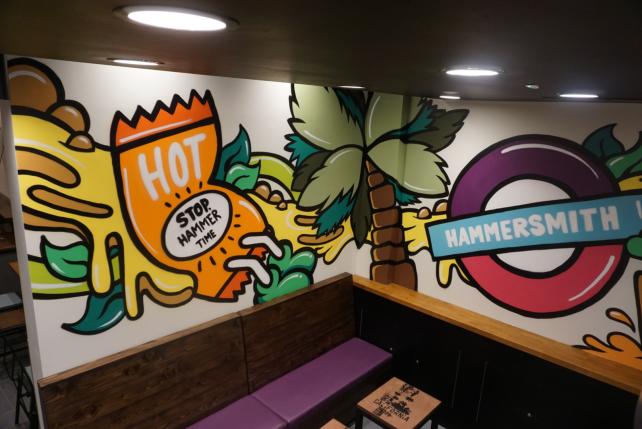 The stunt comes as Taco Bell plans to open its first London restaurant on Nov. 23 in Hammersmith, followed by three more in the near future. Taco Bell has been in the United Kingdom since 2010 with locations outside London. Chipotle, often viewed as a rival despite somewhat different menus and prices, opened its first London location in 2010 and now has six locations in the city.

"The consumer demand is definitely there," says Thalberg. Fans have been asking Taco Bell to open in London, including on social media. Plus, she says she's seeing broader global demand for the brand. When Taco Bell did an apparel collaboration with Forever 21 in 2017, some of the retailer's buyers wanted to carry the collection in markets even where there weren't Taco Bell locations, says Thalberg.

It's not the first time Taco Bell has played a prank involving a famous bell. In 1996, Taco Bell took out ads proclaiming it agreed to purchase the Liberty Bell and rename it the "Taco Liberty Bell," in what was actually a big April Fool's hoax.