Twitter is letting you turn your NFTs into profile pics

The social media platform develops way to show membership in clubs like Bored Apes, Adam Bomb Squad and World of Women, by linking to crypto-wallets

Twitter is integrating NFTs into the platform starting with the ability to embed the digital assets into profile pictures, as part of a new function it launched Thursday.

Twitter showed off the NFT feature with a promotional video that demonstrates how crypto-collectors can link digital wallets, which store the non-fungible tokens, to their Twitter accounts.

With that link to the wallet, people can choose which NFT avatar to put on display.

“Show off your prized possessions,” Twitter said in its prompt to users.

NFTs are technically known as non-fungible tokens, which are digital assets created using blockchain technology and are mostly traded in cryptocurrencies. The virtual goods are considered a form of digital ownership that could be applied to metaverses, gaming worlds and web 3.0 social platforms.

“Nowadays, people are using NFTs as a form of identity and self-expression, and as a gateway into the thriving community and increasingly active conversation on Twitter,” Twitter said in its announcement on Thursday. “This new feature provides a seamless, user-friendly way for people on Twitter to verify their NFT ownership by allowing them to directly connect their crypto wallets to Twitter and select an NFT from their collection as their new profile picture.”

Twitter has been exploring more ways to incorporate NFTs and the concepts of decentralized networks into its platform. In June, Twitter created 140 NFTs as part of a marketing and art project. In September, Twitter announced it would start allowing users to “tip” accounts they follow using Bitcoin, and it announced the plan to integrate NFTs into the profile pictures.

Related: How NFTs are used by brands—a continually updated list

The initial launch of NFT profile pictures is reserved for members of Twitter Blue, its subscription-tier service. Users can link wallets from Coinbase, Metamask, Trust, Rainbow, Argent and Ledger Live.

Twitter debuted a short video demonstrating the feature, which was filled with NFT references that users steeped in the space would understand. The video opens with Bobby Hundreds, a.k.a. Bobby Kim, uploading an Adam Bomb Squad NFT to his Twitter profile. Bobby Hundreds co-founded The Hundreds, the popular streetwear brand that was behind the Adam Bomb Squad NFT collection. The video also nods to Bored Ape Yacht Club by starring Josh Ong, @beijingdou on Twitter, a communication consultant and prominent NFT collector who is a Bored Ape member.

The video ends on Rosalyn Gold-Onwude, the basketball star, showing her membership in the World of Women with an NFT avatar.

Twitter’s NFT profile pictures video was produced by the Twitter’s Studio team, and was going to play on social channels. Ad agencies Where the Buffalo Roam and Run Kick Shout helped on production and animation, a Twitter spokesperson said. 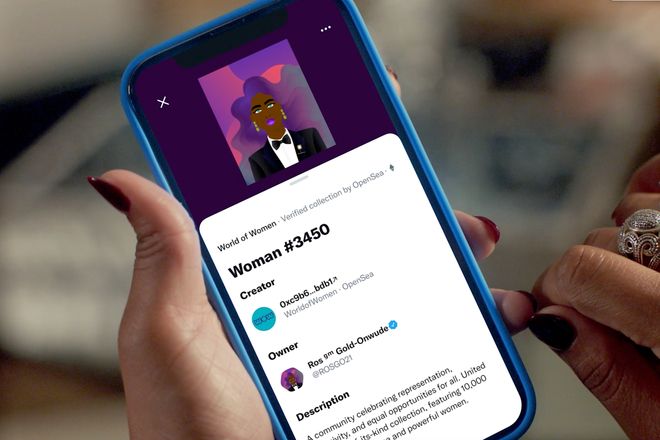 NFT images already are popular avatars on Twitter, but the company is trying to make their provenance a little more identifiable. As it stands, anyone can use any image file as their Twitter profile, but the NFT owners will have profiles that are shaped as hexagons to authenticate that they are the actual owners.

Twitter has been promoting how much interest there is in NFT markets on its service. On Thursday, Twitter said that since Jan. 1, 255.6 million tweets globally referenced NFTs. Earlier this week, Twitter and Bloomberg announced a partnership to produce crypto-news on the messaging app through the Twitter handle @crypto.