Outside of a smattering of targeted print and online ads, Volkswagen has largely avoided alluding to its 2015 global diesel emissions scandal in U.S. advertising. But now, some four years later, the automaker is tackling the issue head-on in a new TV ad airing during tonight’s NBA Finals as well as in remakes of its iconic “Lemon” and “Think Small” ads. The campaign spins the crisis into the impetus for its aggressive move into electric vehicles.

“Our biggest mistake has led to the biggest transformation in the company’s history,” Jim Zabel, VW of America’s senior VP of marketing, said in an interview discussing the campaign's message.

It's the first work for VW by its new U.S. agency Johannes Leonardo and marks a significant change in tone from the more lighthearted ads created under its previous shop, Deutsch.

The TV spot, called “Hello Light,” is backed by the Simon & Garfunkel classic “The Sound of Silence.” Directed by Daniel Wolfe of Somesuch, it begins with a flashback of news reports of the 2015 scandal, when VW admitted to installing “defeat devices” on vehicles in an alleged attempt to evade emissions testing. The crisis, which drew major headlines, tarnished the brand’s long-held pro-environment positioning, while resulting in billions of dollars in legal settlement costs.

The spot quickly transitions into portraying a designer sketching electric vehicle renderings in a dimly-lit room. He grows frustrated, then is inspired by taking a look at old drawings of VW’s classic Microbus. Then come modern-day vehicle manufacturing scenes followed by a glimpse of the planned I.D. Buzz, an electric version of the Microbus set to arrive in 2022. The ad ends with this: “In the darkness, we found the light. Introducing a new era of electric driving.”

Part of a larger campaign

The spot will get a limited run until June 19 before VW begins a new brand campaign called “Drive Something Bigger Than Yourself,” which is partly an allusion to the environmental benefits of electric vehicles.

Leo Premutico, co-founder and co-chief creative officer at Johannes Leonardo, says the ad is “very much about clearing the air with our customer. Because it’s really hard, difficult, to become a part of culture again if we are not reconnecting with our audience.”

Zabel concedes that the new ad will again remind the U.S. population of the scandal, but says, “without mentioning the past...we would never have the credibility or authenticity to move forward with the brand.” He adds: “Through the last three-and-a-half years or so we kind of operated as usual in the consumers eye. We kept a very consistent message in the marketplace but didn’t really have a powerful point-of-view as a brand.”

He declined to reveal how much VW paid to secure the rights of the Simon & Garfunkel song. Premutico says the song, and the mood it creates, is “inextricably linked” to the ad. He also noted that the tune, which came out in the early 1960s, “takes us back to that moment when Volkswagen was at its strongest.”

Such nostalgia also underpins new print ads by Johannes Leonardo that reimagine classic VW ads from the 1960s by Doyle Dane Bernbach that took an anti-establishment approach and deployed iconic lines like "Lemon" and "Think Small."

One of the new print ads (below) uses the phrase “Lemonade,” and a picture of the I.D. Buzz. Copy  alludes to the scandal by stating, “even the sourest situation can be turned into something sweet.” Another print ad states, “After a bad buzz, here is a better one.”

The ads are slated to run in the New York Times, Wall Street Journal and Washington Post. 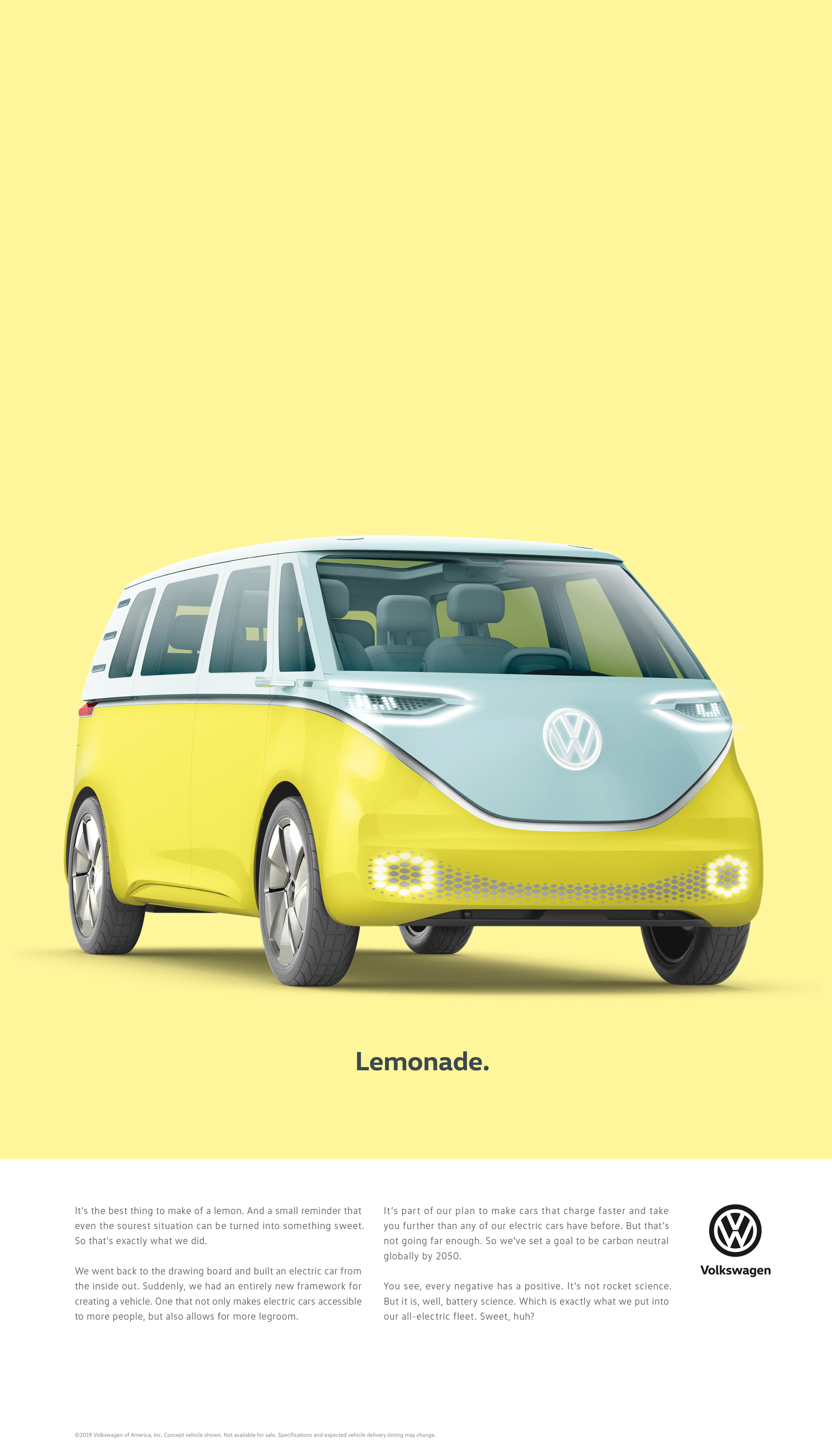 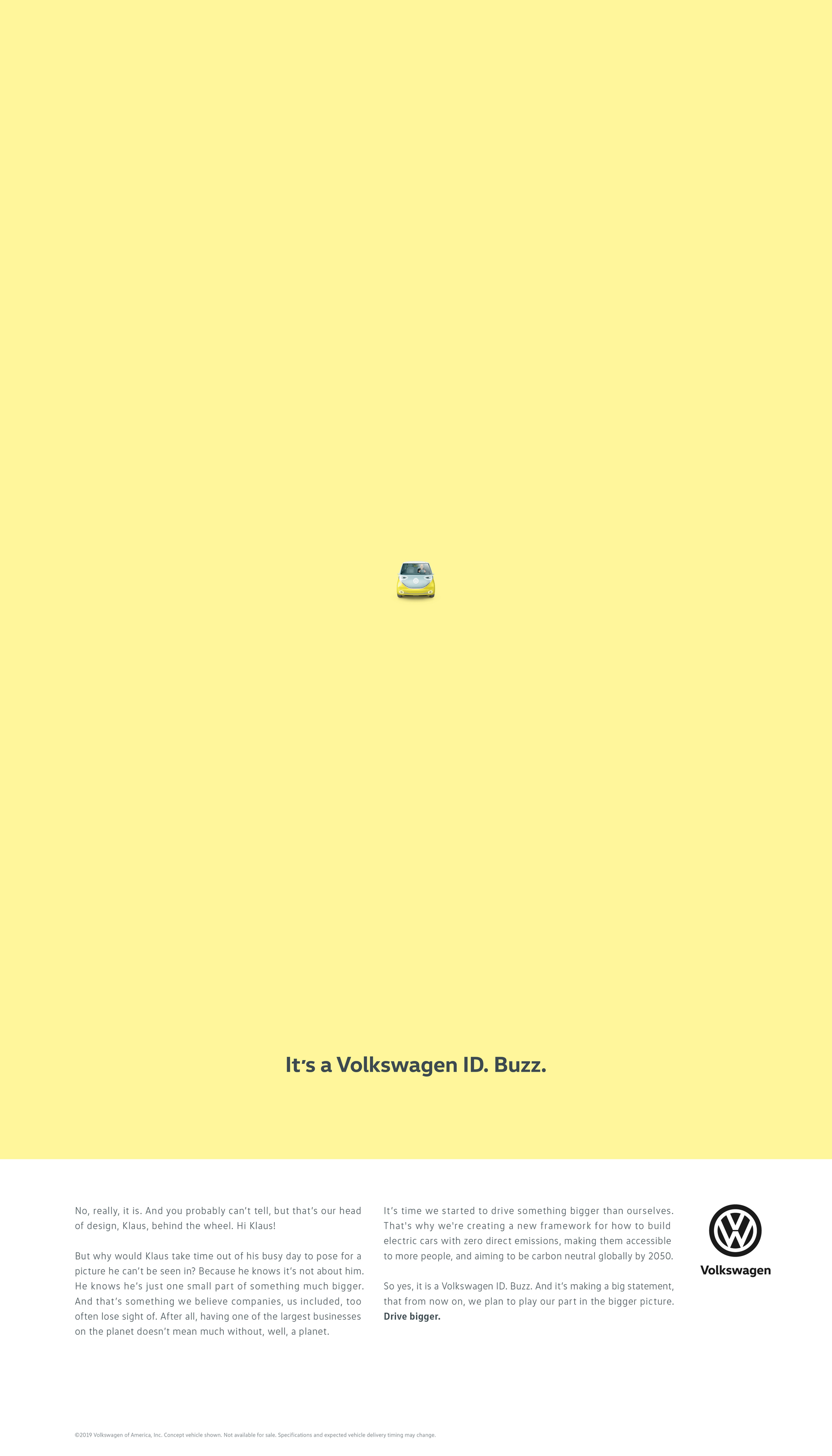 Head of Integrated Production :
Dana May

Volkwagen: VW's 'Road Tales' app encourages your kids to look out of the window on car trips