Six takeaways from Ad Age Next: A revolution in sound | Ad Age
Skip to main content
Sign In Register

Six takeaways from Ad Age Next: A revolution in sound

On September 17, Ad Age partnered with Universal Music Group for a daylong conference that covered advertising’s “Revolution in Sound,” including audio branding, sonic logos and the latest music marketing strategies.

Here are some key takeaways from the music and marketing experts at the event:

1. Think big picture when considering an audio identity for your brand. 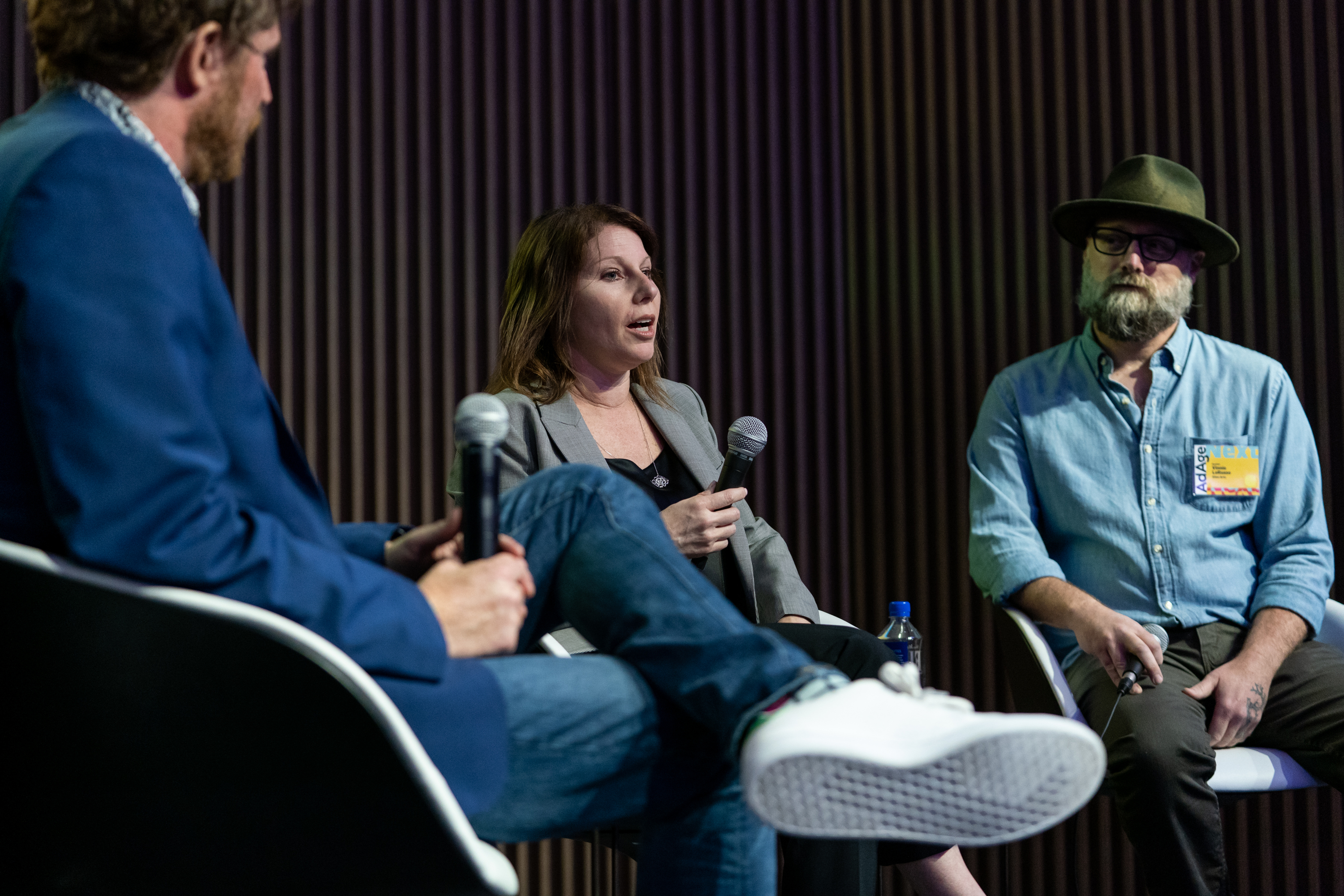 When Mastercard was looking for a sound to accompany the highly recognizable interlocking circles of its visual logo, Cheryl Guerin, executive VP of North America marketing and communications, said that the need for the company’s customers to hear and trust that their digital transaction went through was just as important as having an all-encompassing sonic logo—one that could be continually reimagined for different markets across the world.

The main things brands will do wrong in this area? “Not stepping back far enough,” LoRusso said. Especially with some agency work, “they just want something quickly for whatever this next campaign is, without thinking, ‘Hey, if we took a breath here for a minute and looked at this, we could do something that doesn’t back us into a corner.’”

Taking the long view, the way Mastercard did, is key. “We operate in over 200 countries,” Guerin said, “and every country could version this [melody] so that it fits in beautifully with the culture of that setting.”

2. Sound is emotional, so don’t undervalue it. 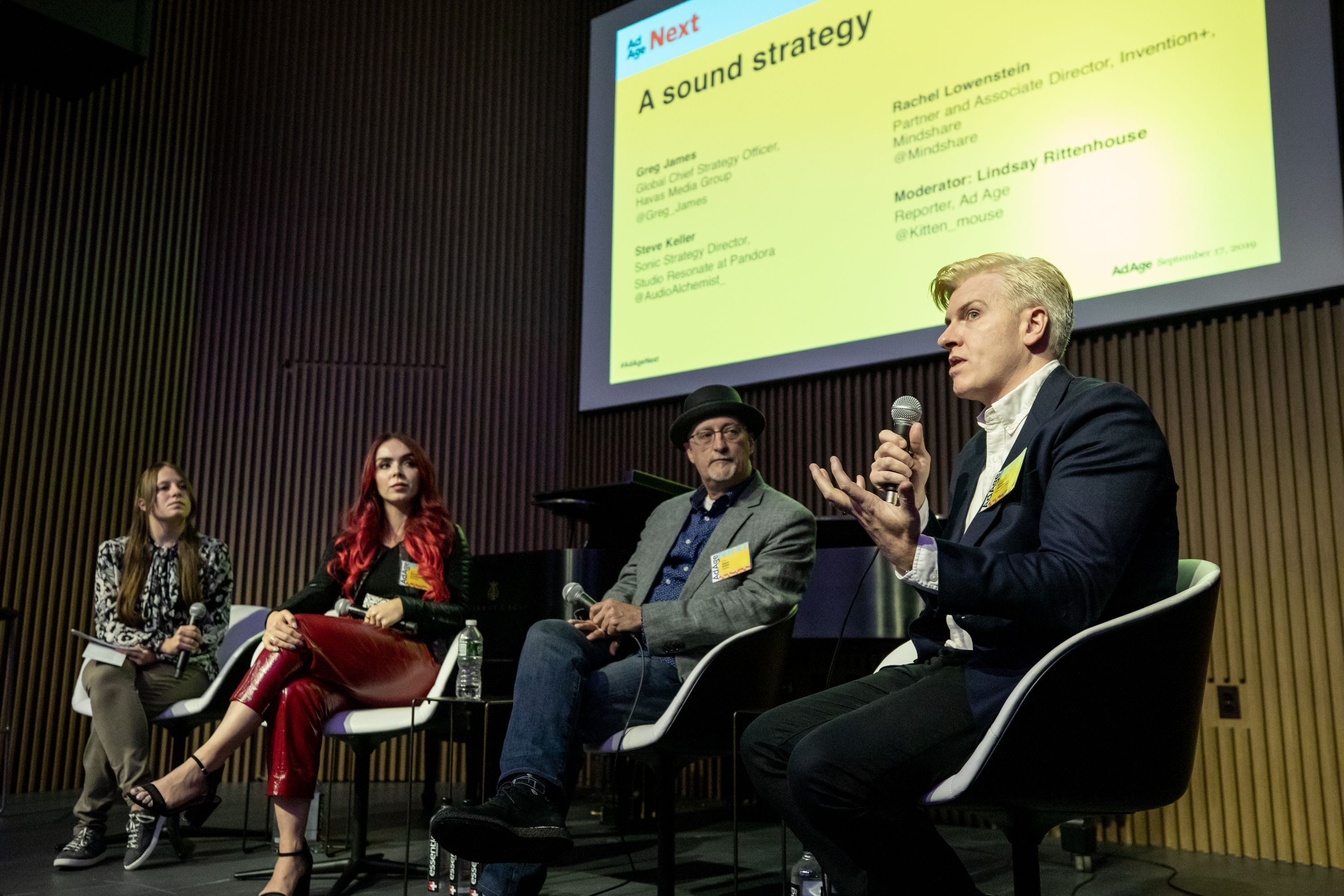 “How can we use science to inform the creative process and actually help the designers, the composers and the voice talent understand a different way to inform their creative?” asked Steve Keller, sonic strategy director for Pandora’s Studio Resonate. Using data remains the go-to way to make these pricey business decisions, but Keller warned to not strategize too stringently. “How can we not, to paraphrase Matt Damon, ‘over-science the shit out of it,’ so that we remove the possibility for excitement and discovery?”

Rachel Lowenstein, a partner and associate director of invention at Mindshare, agreed. Her company uses brain science to see how sounds drive emotion, and while she said her clients are excited about the neuro lab and the insights Mindshare can glean from it (for example, how audio drives emotional connection better than visuals alone), she too counsels clients to remember to “take off your marketing hat and think like a human.”

3. Podcasts are here to stay. 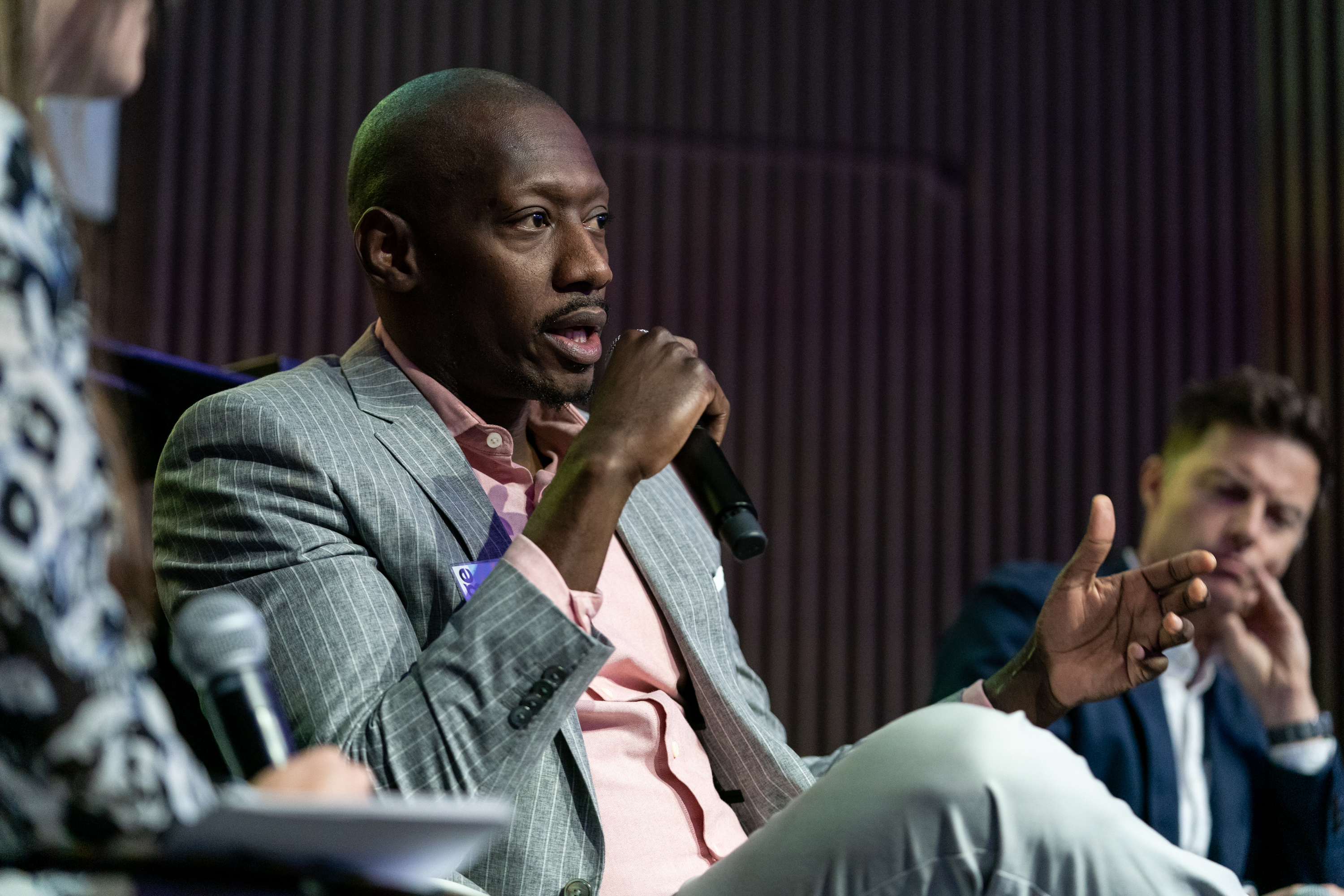 Conal Byrne, president of iHeartMedia’s podcast network, said that while podcasting has “blown up in volume and scale, the thing that has not changed is the engagement of the audiences.” Typically, when a medium explodes, engagement plummets, but with podcasts, Byrne says, those numbers remain consistent across the various analytics they track. “Eight or nine out of 10 listeners on a lot of our shows are subscribers, and we see completion rates of 80 to 85 percent on hour-long episodes,” he said.

Gary Coichy, founder and head of partnerships at Pod Digital Media, says such metrics have helped his multicultural podcast network—which includes more than 200 shows featuring black female entrepreneurs, athletes, musicians, members of the LGBTQ community, etc.—attract advertisers and get voices on the air.

“Advertisers come to us and say, ‘We’re already reaching the general market, how do we connect authentically with the multicultural sector of podcasting?’” Coichy said. “Our audience is multicultural—it’s Hispanic, it’s African-American—but also, the reason they’re creating podcasts is that they don’t want to be restricted by the FCC or by specific networks. They want the creative freedom that podcasts offer,” and that authenticity appeals to advertisers.

“Podcasting is a super-fan based medium with an engagement level that hasn't stopped," added Byrne. "When you see that, you start to think this is probably not a flash in the pan, this is probably here forever." 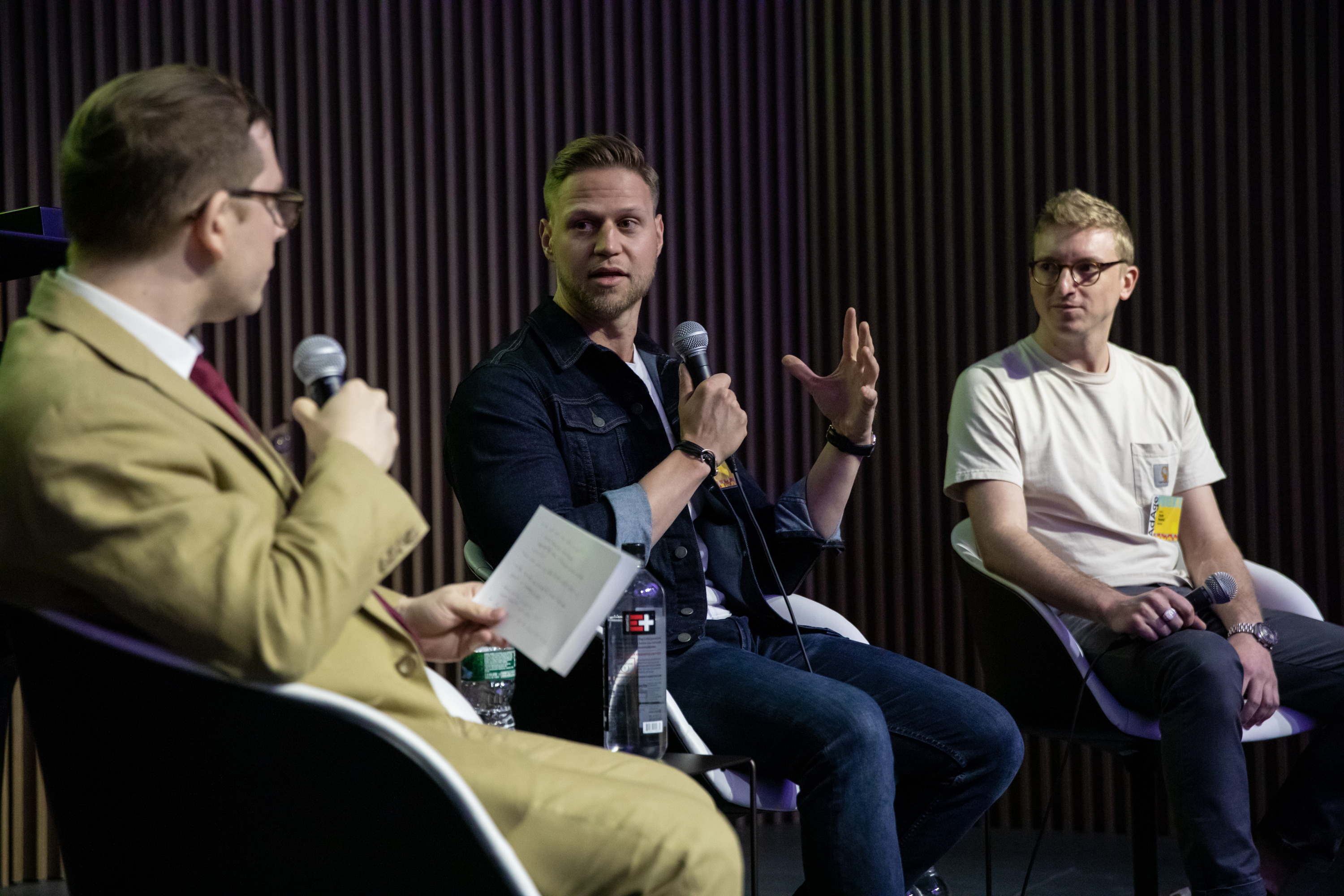 A strong music strategy taps into culture in a way that an existing audience can appreciate and a new audience can get behind. Still, getting an artist heard is a challenge. “If a beat drops in the forest, does anyone hear it?” asked Mike Ladman, the music supervisor for Droga5. “There’s a lot of noise out there, and how do you cut through that? Even if you write a great song, it’s tough to get that song out there and amplified. With strategy and branding and that cohesiveness of a vision and a campaign executed on multiple platforms, both the artist and the brand can move together to accomplish that.”

Zach Pentel, Spotify’s global director of brand strategy, added that sometimes artists will use their music strategy techniques in less overt ways. “Metallica go on all these massive global tours, and they do not have time to play every one of their hits in every single city, so they’ve been using Spotify data to help organize their setlist country by country and city by city to help create a better experience for their fans.”

5. 'Selling out' is no longer taboo, but for both the artists and their fans, an authentic connection with brands is essential. 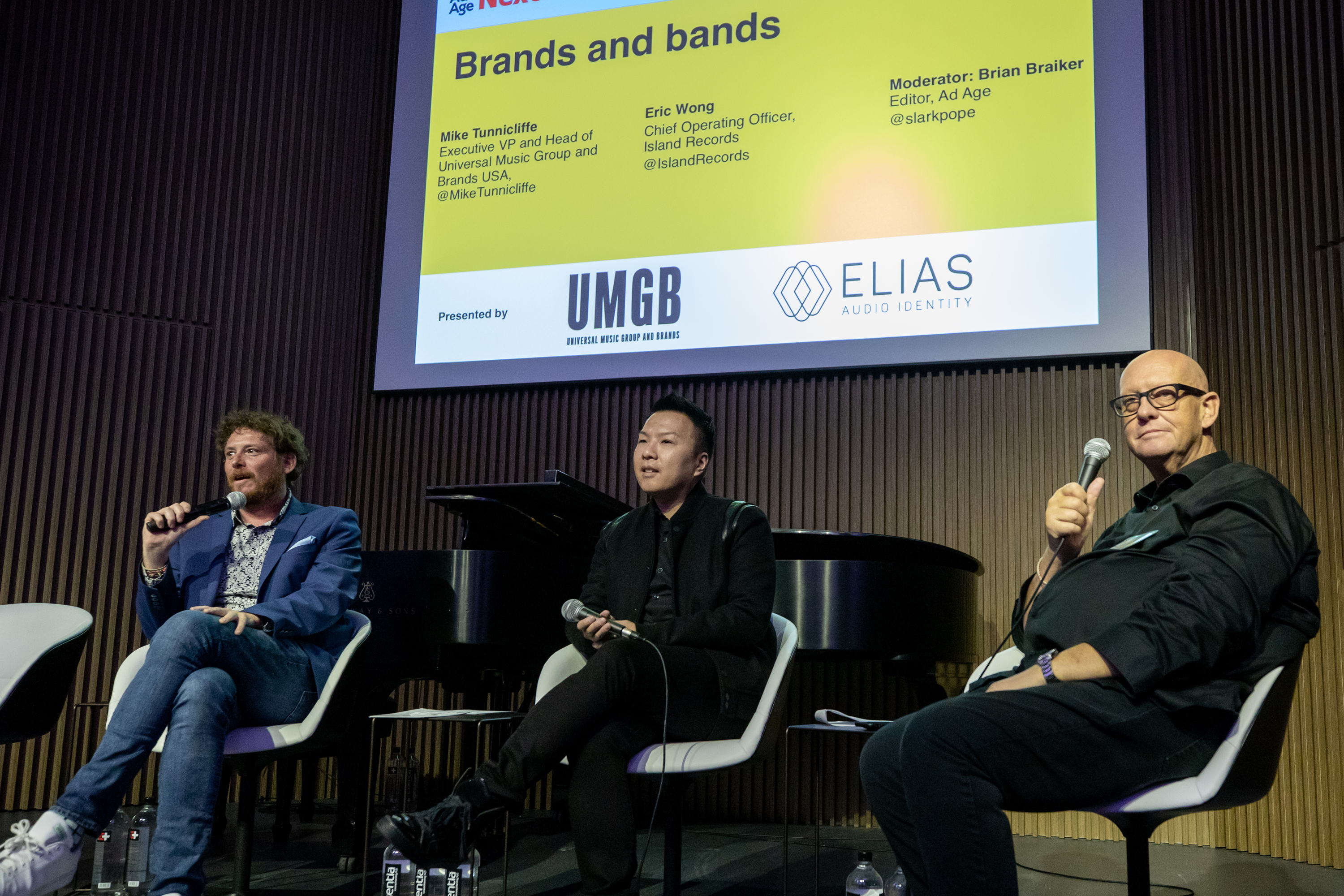 For most musicians, soundtracking a commercial campaign or partnering with an advertiser for a full tour is no longer taboo—as long as the partnership is authentic. For charitable or social causes, though? A lot more thought needs to be put into those.

“All artists have causes that they’re really into and their fans are really into … I think brands that try to jump on the back of the artist’s interests in an inauthentic way are likely to fail,” Mike Tunnicliffe, UMG’s executive VP and head of UMGB USA, told Braiker.

“One of the ways that’s been working well is through an artist’s foundation,” said Eric Wong, COO of Island Records. “For instance, Shawn Mendes' foundation caters to issues that are important to his fans, like mental health. Jon Bon Jovi has his Philly Soul Foundation. When it comes from the heart, and brands approach it through their foundations, it’s a more organic way for it to be presented."

And according to research Tunnicliffe cited, one in three fans want artists to pioneer particular causes, such as when the rapper Logic promoted the National Suicide Prevention Hotline in a song. “That campaign generated a 100 percent increase in calls to the hotline,” Tunnicliffe said.

6. For brands, knowing the specific metrics for success is key. 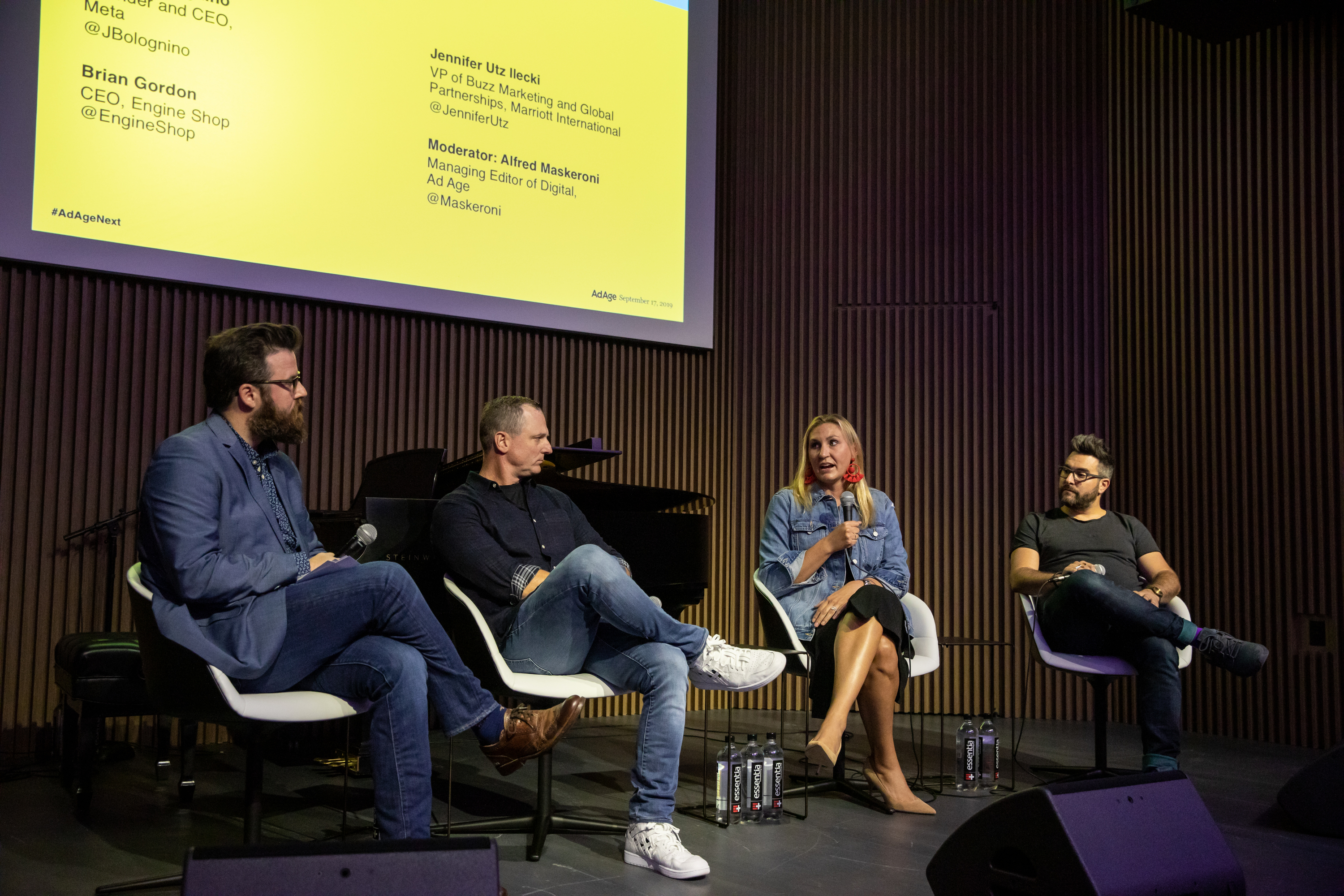 Jennifer Utz Ilecki, VP of buzz marketing and partnerships for Marriott International, told Alfred Maskeroni, Ad Age’s digital managing editor, that her position didn’t exist just a few years ago. One of the challenges she’s faced is educating companies regarding the value of experiential marketing and pushing for it to become a line item in their budgets. Understanding the business metrics they want to see—for Marriott, it’s “drive heads to beds”—has helped inform decisions about which events they want to sponsor or create experiential activations for.

Brian Gordon, CEO of experiential agency Engine Shop, concurred. “Just because everyone is doing music festivals doesn’t mean that music festivals will work for Brand X,” he said, adding that knowing exactly why a brand wants to get into a specific space and where they intend to go from there can help guide these decisions.

“There’s so much tactical thinking and so little strategic thinking,” said Justin Bolognino, the founder and CEO of Meta, an immersive experience production company, about the way companies tend to approach events. “If you want long-term growth, you have to think strategically and you have to think like a storyteller. There has to be a narrative arc—you want slow but powerful growth as opposed to these little spikes." 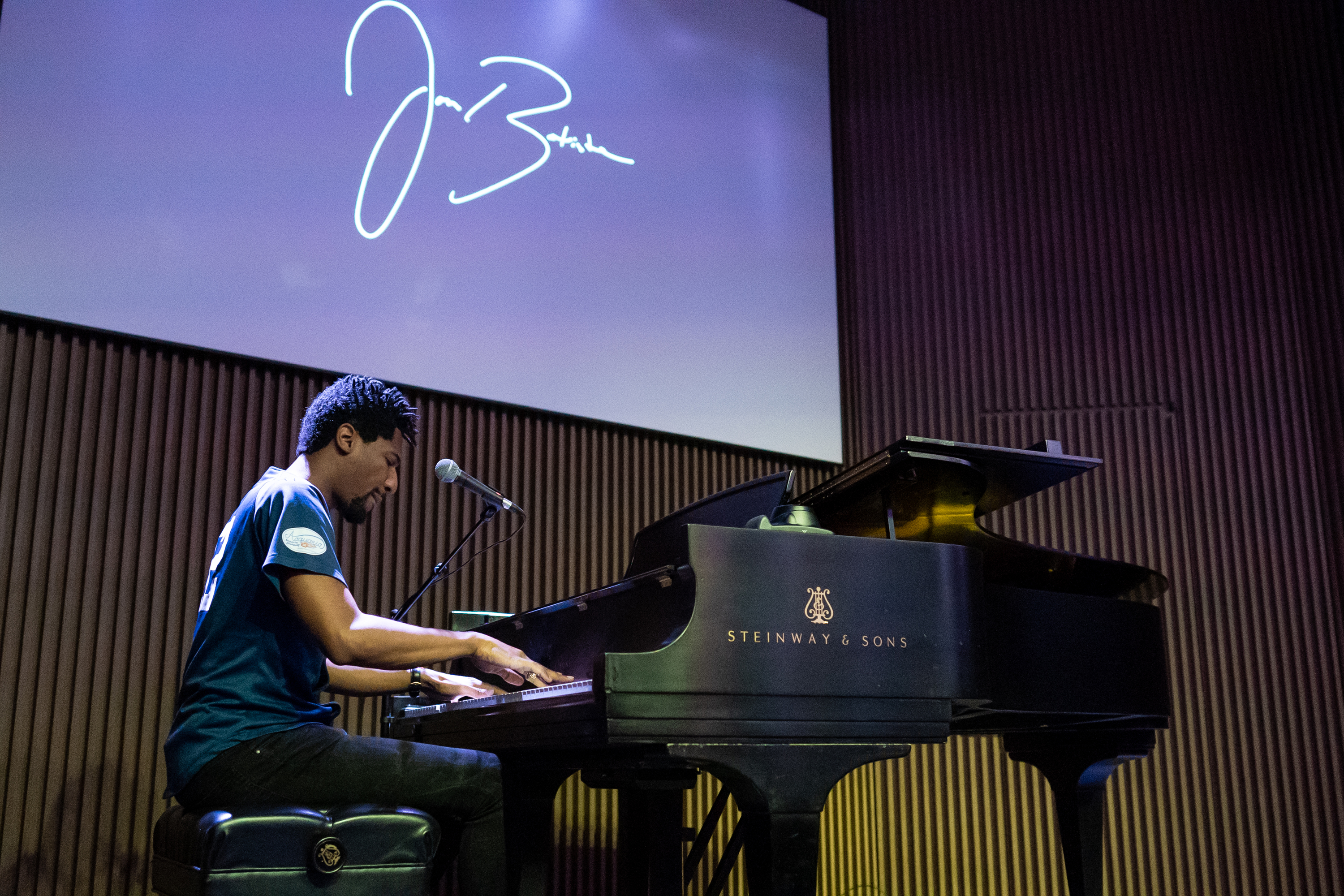 Jon Batiste treated the rapt audience to highlights from his newest album.

Musician Jon Batiste might be best known as the bandleader on “The Late Show with Stephen Colbert,” but he is also well versed in musical branding—he wrote the Colbert theme song, “Humanism,” for one, and has been featured in numerous campaigns for companies including Chase Bank, Apple Watch and Lincoln Continental. Batiste brought down the house with a solo piano performance featuring a couple of tracks from his latest album, “Anatomy of Angels: Live at the Village Vanguard,” including Thelonious Monk’s "Round Midnight," as well as crowd-pleasing standards like a syncopated, stomping version of "When the Saints Go Marching In" and his take on the John Coltrane version of "My Favorite Things” mashed up with “Chopinesque” (a variation on the classical composer’s Nocturne, Op. 9, No. 2) and Marvin Gaye’s “What’s Going On.”