Anthropology of Ad Agency Summed Up in 2 Minutes Flat

Ad for FITC Design & Technology Festival Sums Up Chaos Scenario in Far Less Than 90,000 Words
READ THIS NEXT
Ad Review: Skittles Makes the Play of the Week

So there's this idea that's been floating around the past number of years about the collapse of media, the increasing irrelevance of advertising and the consequent death of the agency business.

Where does this alarmist nonsense come from? TV didn't kill the movies, duh. The VCR didn't kill TV. O.J. didn't kill Nicole. Maybe the so-called digital revolution will force the legacy players to adapt a bit, but -- sheesh -- it's not like this is some sort of chaos scenario. 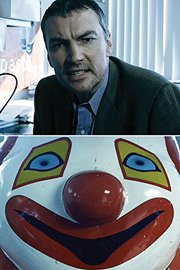 How does AdReview know that? Because we've been reading the comments over at Vimeo, where resides a short film from Saatchi, Canada, for the FITC Design & Technology Festival, titled "The Last Advertising Agency on Earth." The two-minute video is about a fictional agency called MPS&C, which held a death grip on the status quo until one day it simply ceased being. All the ephemera of agency life were left behind, evidence of the fatal affliction of business as usual:

"Filling in timesheets,"explains an English narrator. "Getting another coffee, playing Foosball. They were carrying on as they always had, ignorant of a great change going on all around them that would soon destroy them all. And this was it: the consumer, to whom the agencies had force-fed their messages for decades, stopped being passive."

The narrator then displays the artifacts of denial. Photo loupes, T-squares and, most especially, TV scripts, which the employees had clung to "even when clients begged for new, nontraditional ideas. So they simply repurposed their print ads into clever rich-media banners and glibly suggested that everyone have a Twitter feed."

And so on till the business was unsustainable. One after another agencies slipped into oblivion, "because of arrogance and ignorance and because they chose to ignore the changes going on all around them. But, in the end, the reasons don't matter. What matters is there were people once in this advertising agency. And one day, there weren't."

OK, so AdReview would be most enthusiastic, not only because the video sums up the whole "chaos scenario" scenario in about 90,000 fewer words than some people we know, but also because it deftly and amusingly documents the anthropology of agency life. Never mind the loupe; check out the bong, the panties pinned to the bulletin board, the beer bottle, the PostIt note inscribed, "Bad ads make kittens cry."

Also, the ad does pitch the advertised product as the solution to the stated problem. Which, despite the dubiousness of the claim, is probably more than the late mps&c ever did. That's why we're bestowing those three stars.

Sadly, though, the cleverness may be in service of a poor strategy, because in order to sell the customer on a solution, the customer must first recognize a problem. This gets back to the comment section, where a major theme was to deny the premise. Here's one from a guy named Adam:

The internet is the world's largest communications tool, connecting you with thousands of people you wouldn't otherwise be able to connect with. Good advertising understands this. Bad advertising doesn't.

Thus a fine example of the standard of critical thinking at modern ad agencies -- prompting the core question:

If that's how the audience sees the world they inhabit, what's the use of trying to educate them?