Masters of Sex and Satire: How Durex Wins in China With Digital | Ad Age
Skip to main content

Masters of Sex and Satire: How Durex Wins in China With Digital

Tactics Range From Humor on Social to Personalized Condoms Via E-commerce
READ THIS NEXT
Kroger to build online marketplace to compete with Amazon, Walmart

Of all the brands using digital and social media to compete for the attention of China's 668 million internet users, Durex has emerged as the master of witty, shareable content. That's partly because regulations on traditional advertising in China forced consumer goods giant RB to get creative after it took over Durex in 2010. "Historically, TV advertising has been banned for condoms," said Ben Wilson, RB's marketing director for China. "When we first started, it was a huge challenge to our global model, which was TV-driven, and that forced us to be much more digital."

Regulations have since loosened up, but Durex is sticking by its digitally and socially led strategy -- an approach lauded in a Harvard Business School case study explaining how Durex sales increased threefold in China from 2010 to 2013. To target digital natives, traditional TV now seems beside the point, and the company has already found its sweet spot with a mix of paid, owned and earned digital media, including amusing online games and articles about sex ("Nine Amazing Facts About the Clitoris," "One Sentence to Describe Your First Time?"). That kind of content takes on extra interest in a country where there's little formal sex education, and where people can shy away from talking publicly about sex. 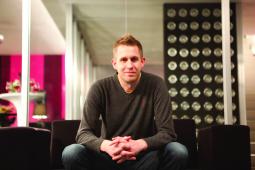 Ben Wilson, a U.K. native, has been in China for five years with RB.

The condom and sex toys brand has also made a specialty of funny quips about current events. When everyone in China was talking about the new "rose gold"-colored iPhones, Durex used microblogging platform Weibo to explain how to make a DIY version: A video tutorial showed someone wrapping a gray phone with a red condom to turn it rose. That post got more than 760 shares and 470 comments.

Durex, the No. 1 condom brand in China and globally, often experiments. It partnered with startup accelerator Beijing Tech Hive to challenge entrepreneurs for ideas around sexual well-being. And amid China's e-commerce boom, it's offering personalized condom packages. For Chinese Valentine's Day, or Qixi, in August, people could choose a box featuring the lovers from the ancient myth that inspired the holiday, and write a custom message to their significant other on it. (RB, whose other brands include Dettol soap and Finish dishwashing detergent, gets 20% of its sales in China from e-commerce; the company has said it's using China as a global model.)

Mr. Wilson, a U.K. native, has been in China for five years with RB; he talked to Ad Age about Chinese millennials, customization and the brand's cheeky social media persona, Dudu.

Ad Age: What's the appeal of a customized
condom pack?

Mr. Wilson: If you look at the Durex target demographic, it's the '90s generation. They are very into expressing their own identity through personalized experiences. One of the things we're trying to do is allow people to create that expression and really use Durex as a canvas for being able to express themselves. … We've been doing that around some of the events on the calendar, including I Love You Day. [That's May 20, a date whose pronunciation is similar to "I love you" in Mandarin.]

Ad Age: There are a lot of holidays focused around love in China.

Mr. Wilson: It's not just about traditional, typical romantic holidays. There's obviously Valentine's Day, there's Chinese Valentine's Day, there's I Love You Day. Even if you take something like Earth Hour, it's an opportunity to make Durex relevant. The time you're saving electricity is a time you're turning off the lights. It's an opportunity for people to turn off mobile phones and actually spend some time with their partners. We ran a campaign called "Turn Off to Turn On," and it was all focused around the insight that, typically, today people spend more time on their mobile phone than they do talking to their partner.

Ad Age: Besides personalization, what else have you been experimenting with?

Mr. Wilson: We launched a new product about six months ago called Durex Air. … We had a three-hour Durex commercial [which ran online]. That played out before the launch of the product. It went live. We had some great fun interacting with people from a social point of view. And it got some very interesting comments and engagements around it. It was all about how good things are worth waiting for. … It was just about doing something completely different than what a brand would typically do. Most brands look at, 'How do we optimize things into a 15-second TV commercial?' … From the way that we built Durex on social, we built up a personality where Dudu is often doing these quite unconventional things.

Ad Age: Talk a bit about Dudu, which is the name for Durex's social media persona in China. Does he exist in other markets?

Mr. Wilson: It's very China-centric. It's something we created in China which is all about Durex being a friend and having friends, rather than using social media as a way of targeting people. … People go into WeChat; they go into Weibo; they're interacting with their friends; they're sharing moments in their life. I think that's been what differentiated Durex and what differentiated Dudu. We're not pushing product messages and brand messages. We're just having some fun and interacting with people in a way they would expect in those environments.

Ad Age: What kind of cross promotions do you do?

Mr. Wilson: We're always open to working with other brands. There's a finance brand called lu.com, and we've just launched a crossover brand promotion with them. One of their core targets is encouraging young couples to invest. … You can say, 'What the hell does finance have to do with condoms?' But when you think about it, when couples get together, it's one of the key points in life where you think about finances. How do you move from being a single person, looking at the world from one perspective, to being a couple, and thinking about finances in a very different way?