Media Company Launches 'Special Features,' Another Addition to BrandVoice Platform
READ THIS NEXT
Beyond MyPillow: the other biggest brand advertisers on Fox News revealed 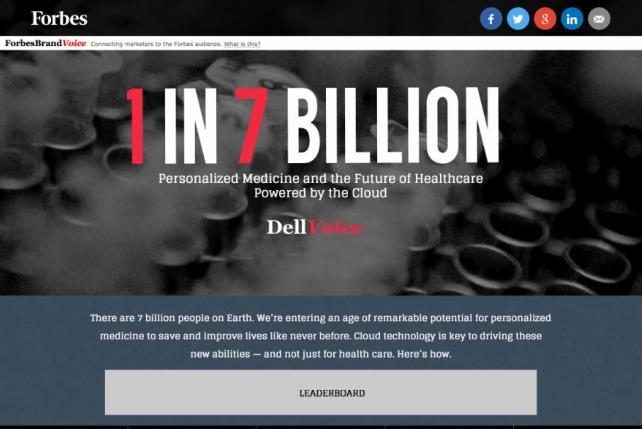 Forbes Media announced today the expansion of its native advertising efforts with BrandVoice "Special Features," which allows companies to publish branded digital content with the same tools as the editorial staff.

This is the fourth BrandVoice feature created since the platform's debut in 2010. The new offering will allow advertisers to take a multi-platform approach by including posts, videos, infographics, interactive elements and photo galleries on the Forbes website.

Dell is the first company to use the new feature, in partnership with Forbes.com. The marketer's eight-week campaign "1 in 7 Billion" kicks off today. The campaign focuses on personalized medicine and technology-driven healthcare available through the cloud, and is part of a larger campaign called "Future Ready."

"We believe in giving marketers the same access to the content creation tools as our editorial staff," said Ann Marinovich, Forbes Media's VP-advertising products and strategy. The "Special Features" service allows for a marketer to "take a deeper dive into one particular topic," Ms. Marinovich added.

Since 2010, BrandVoice has helped Forbes attract advertising dollars, raking in approximately 30% of the company's advertising revenue in 2014, according to a statement. 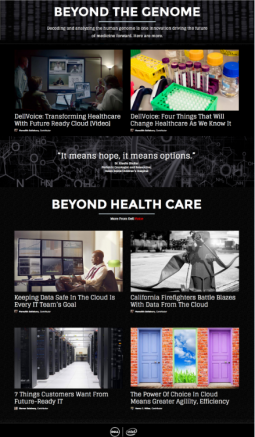 Earlier in 2015, "Pulse," a one-month commitment multimedia feature which starts at $300,000 was added to the BrandVoice platform. Forbes Magazine also offers two print services including a two-page spread and a column.

While companies that use the service are marked as paid advertisers, Ms. Marinovich believes native advertising is successful because advertisers get the same access as the editorial side.

"It's the fact that we are giving brands that ability to tell stories and share insights using the same publishing tools that our editorial staff uses. We publish it through our content management system, and they get the audience and all of the same SEO," Ms. Marinovich said.

Courtney Fishman
Follow View all articles by this author