Saturday Morning co-founder Geoff Edwards shares work from Mattel, Chevy, General Mills and more that changed marketing for the better
READ THIS NEXT
Is your brand ready for the next shopping revolution?

As Black History Month comes to a close, Ad Age asked Geoff Edwards, co-founder of Saturday Morning, to share his thoughts on campaigns that shifted the industry for the better in terms of represention of African Americans in advertising--ideas that should inspire the industry to keep diversity at the forefront all year long.

Over the last few decades, only a few campaigns come to mind that represent an African-American point of view or have black characters central to the storyline. The reality is, blacks haven't been considered in narrative storytelling because the authors aren't people of color. Many of the commercials you see reflect that skew.

I think it's important that the stories we tell represent everyone authentically. To be clear, not "tokenism," but realism: African-Americans want to see themselves, their families, and friends in stories. It's that simple.

The worldwide advertising industry spends $600 billion in advertising annually. So it's fair to say that we affect just about everyone in the world with the images we show. With that influence, It's important that our reach is used for positive and accurate portrayals of everyone alike.

And if doing the "right thing" isn't motivating, perhaps money is.

At a corporate level companies are questioning why their brands should even get involved in social issues. The answer is simple: millennial and Gen Z audiences expect no less. And to quote Marc Pritchard, Chief Brand Officer at P&G, "When audiences relate to brands, they buy those brands."

I was pleased when asked to share my thoughts and opinions on work that effectively highlights African-Americans and on campaigns that have leveraged diversity over the years. Here are a few:

"The Talk" shined a light on racial bias by focusing on the conversations that black parents in America have with their children to prepare them for life in a white world.

My relationship with P&G's "The Talk" has been documented live on the Andys 2018. Though it left me conflicted initially, I admire the courage that it took to make this film.

Many whites were curious to learn more about "The Talk," while others felt demonized by its message. There were even extreme cases where law enforcement disagreed with the message and called for a nationwide boycott of P&G products. In the end the P&G brand stood behind this courageous work.

Chevrolet: "Mo 'ne Davis 'I Throw Like a Girl'"

"Dear United States of America: I'm 13 years old and this summer was the best year of my life…"

This is the first sentence of a letter by Mo'ne Davis to America declaring her passion for sport and introducing herself to us. Mo'ne is a three-sport athlete who plays baseball, basketball and soccer proficiently. She's a straight-A student and wants to be a role model for people young and old who dare to dream. She throws a 70 mph fastball, and her spirit and fortitude teach us that anything is possible.

Her story aligned with Chevrolet strategy to celebrate and support people like Mo'ne who "Inspire Greatness." She was featured in the brand's 2014 campaign from Spike DDB directed by Spike Lee that aired during the World Series and also included in a documentary short, "I Throw Like a Girl."

It was after seeing her commercial that my daughter and I did a little research on Mo'ne and discovered that she'd written a book, inked a movie deal and appeared on Jimmy Fallon, all before her freshman year in high school. Her story is an inspiration to young African-American girls everywhere, and hats off to classic American brands like Chevrolet for recognizing and highlighting the achievements of this young woman from South Philly while inspiring others along the way.

Grace Colbert, the adorable little girl who starred in this ad, won the hearts of families across the country for pouring Cheerios on her father's chest while he napped after she discovered that the cereal was good for heart health.

It's a charming commercial that ends with the understated tagline, "Love." And there's one particular detail worth mentioning--the child was mixed race. Her father was black and her mother was white. Not a big deal in 2019, but for some reason, this caused a stir when it launched.

The commercial received such negative racial backlash on YouTube that the comment section had to be closed. It had been flooded with comments referencing Nazism, troglodytes and genocide.

The ad reminds us of the changing complexion of the country as a whole: Today, four in 10 people in America identify with a mixed-race background and 9 million people identify as multiracial.

TIME magazine published an article titled, "The Uproar Over The Biracial Cheerios Ad Is Actually Progress" because it will force us to have conversations about race. The following year, they doubled down and released a Super Bowl spot with the same family. Hats off to General Mills for not caving to the pressure.

The Nike "Equality" campaign was significant because it asks the question, "Why can't we take the fairness and respect we see in sport off the field?" Nike has a long history of speaking up on causes that reflect its values. Everyone from the director, Melina Matsoukas, to a roster of athletes across all sports are ambassadors to this movement on and off the court.

The campaign, which aired during the Grammys in 2017, also gained awareness through NBA players and teams. Large-scale billboards decorated the 2017 NBA All Star Games, and LeBron James wore a custom line of "Equality" shoes created to make a statement during game. Print and social posts carried headlines like, "The ball should bounce the same for everyone"; "The brotherhood we find in sport should extend beyond these lines"; and "If we can be equals in sport then we can be equals everywhere."

Since the launch of this campaign, the mantra of "Equality" has extended into Black History Month with messages including: UNIFY, LEAD, ACTIVATE, PERSEVERANCE, BELIEVE, LISTEN, ENGAGE, DREAM, INSPIRE, HISTORY, JUSTICE, EMPOWER, LOVE, and EQUALITY. These T-shirts have been worn by all 30 NBA teams during warmups in February.

This commercial mantra transcended sport, fashion and culture, and became a community-wide Initiative encouraging programs, mentorship, and donations for inner-city youth programs. A brand walking the talk and using their influence to create awareness, understanding, and change: I can't think of a better message for Black History Month.

Mattel: "So in Style" Barbie 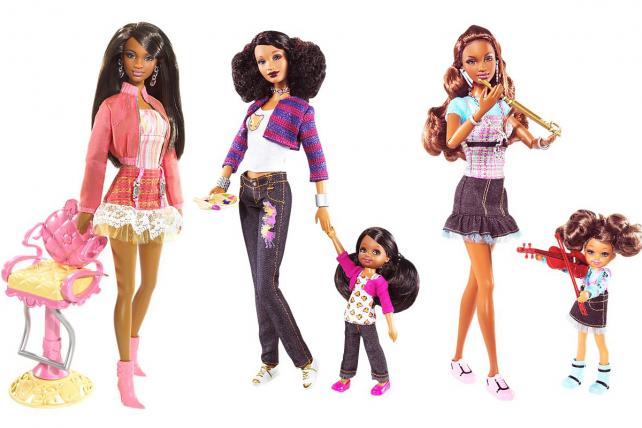 Mattel 'So in Style' Barbies

Until recently the longest running line of dolls in the world didn't have a doll line that represented women today. That's since changed. In 2009 Mattel launched a line of black Barbie dolls with "authentic facial features," and this was a cultural game changer. Now little girls of all backgrounds can see themselves in these iconic dolls. Fuller lips, wider noses, distinctive cheekbones, curlier hair, all features that are distinctly African.

The "So In Style" line of dolls was developed and Inspired by a Barbie designer of 12 years, Stacey McBride-Irby, an African American mother of two who simply wanted to create a line of dolls more reflective of her own children and their community. There were previous versions of Barbie launched in 1968 and again in 1980 but they appeared to be darker skinned versions of the original Barbie doll. This time the company got it right and as a result changed culture.

Simple Idea, but it took two things to bring this to life: An African-American woman in the position to make a change, and an organization open enough to do what's right for a new generation of young women.

As the father of a daughter it's hard to separate my business feeling from my personal feelings on this topic. Books, dolls, and experiences can build a child's self-confidence. When they don't exist, it implies that we don't exist. When they do exist authentically, we're all better for it.

Geoff Edwards is co-founder of Saturday Morning, a creative firm and coalition dedicated to using creativity to fight social injustice. He is an ad industry veteran who has served in creative leadership roles at agencies including McCann Worldgroup, CAA Marketing and TBWA.

Geoff Edwards
View all articles by this author