Budweiser's iconic "Whassup" ad is back, but this time, Burger King has crashed the party. The restaurant has partnered with the Anheuser-Busch InBev brand to revive the celebrated 2000 Super Bowl spot, but this time the catchphrase will introduce the chain's limited-edition American Brewhouse King Sandwich.

The new ad features the original spot's footage and cast "just watching the game, having a Bud" while wagging their tongues at each other on landline phones. Finally, BK's King appears in the kicker, standing at the door, with the Brewhouse burger in tow. What's more, the heretofore reticent mascot seems to "speak"-- his big-headed mask now features a gigantic tongue and he too appears to scream, "Whassup!"--though the word is echoing from the intercom (Previously, he had toyed with breaking his silence, but via sign language).

As part of the partnership, Burger King is also introducing new headgear for the alcohol-drinking set. The limited-edition "Freedom Crown" is available to anyone 21 and over and can hold both the American Brewhouse King Sandwich and a Bud (or any can of beer, we imagine). 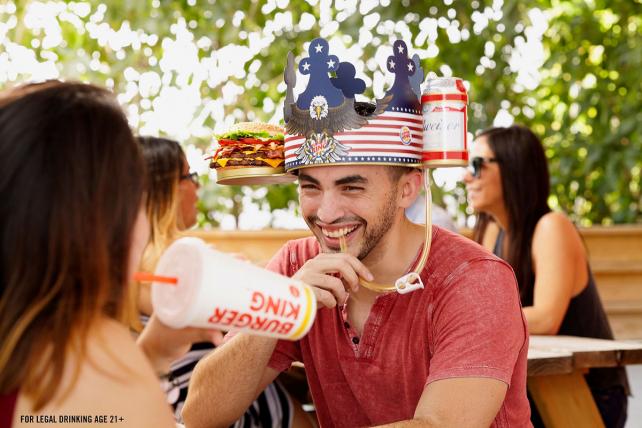 Though Budweiser is at the heart of the campaign, it's not on offer at BK restaurants as part of this effort. Budweiser's VP of Marketing Ricardo Marques said in a statement that the idea positions Bud and BK as the ultimate pairing for summer. The spot will begin airing on broadcast this week and will appear on both brands' YouTube channels.

The BK collaboration comes as Bud this fall plans to join forces with another big brand, Jim Beam, which is working with Bud on a limited-edition brew called Reserve Copper Lager that is aged in Jim Beam barrel staves. The two brands are also appearing together in bars for beer-and-a-shot promotions.

But don't expect to get a buzz from the burger. BK's American Brewhouse King sandwich includes two flame-grilled beef patties, three half-strips of thick-cut smoked bacon, crispy onions, tavern sauce, American cheese and mayo on a sesame seed bun and has a suggested price of $6.19.

The ad idea is kind of a meta-move in that Budweiser had actually been the one to co-opt "Whassup" for advertising purposes. Its original form was the short film "True," created by director Charles Stone III, who also just happened to shoot the updcoming "Uncle Drew" film inspired by the classic Pepsi campaign. After DDB Chicago turned the film "True" into an ad, the spot went on to earn the Film Grand Prix at Cannes and saw various iterations, including versions featuring yuppies and aliens. Stone later went on to remake the film with a political twist in 2008 to support then-Senator Barack Obama during his presidential campaign.

Burger King has been digging into advertising history with its recent marketing moves. Earlier this month, it revived the "Sneak King" character from its Titanium Lion-winning "King Games" for an E3 stunt promoting its Pretzel Chicken Fries.

BK and Bud have strong ties. 3G Capital, a major shareholder at Burger King-owner Restaurant Brands International, has partners who sit on the board at Bud owner Anheuser-Busch InBev. Also, Budweiser last year began using David, which made its name largely on headline-grabbing work for BK.