READ THIS NEXT
Behind the scenes of The New York Times’ ‘Truth’ campaign: Tuesday Wake-Up Call
Dutch duo Inez and Vinoodh worked with YSL and its chief designer, Anthony Vaccarello, to create the controversial images.
Credit: YSL/Twitter

Four executions show various shocking images. One shows a model in a leotard and rollerskate stilettos bending over a stool.

Stéphane Martin, the director of the French advertising watchdog Autorité de Régulation Professionnelle de la Publicité, said via email that the campaign "seriously contravenes" the advertising codes relating to "respect for decency, dignity and those prohibiting submission, violence or dependence, as well as the use of stereotypes."

The watchdog also suggested the campaign could be breaking rules around causing "mental harm to adolescents."

The ARPP has already received 120 complaints since the ads went up across Paris on Friday, sparking an outcry on social media.

French feminist group Osez le Féminisme (Dare to be Feminist) tweeted sarcastically, "Bravo @YSL for your misogynist ads. In the run up to 8th March, it's in the best possible taste." (March 8th is International Women's Day.)

Dr. Amanda Foreman, an historian and a Wall Street Journal columnist, tweeted, "Thank you @YSL for letting us know what you really think of all the women who buy your clothes. Same to you."

Mr. Martin added, "These images, because of the postures of the women, presented as offered to the passers-by, present the woman as an object and suggest an idea of sexual submission. They trivialize sexist stereotypes and are in this sense likely to shock the public sensibility."

The ARPP has asked YSL to stop the campaign immediately. 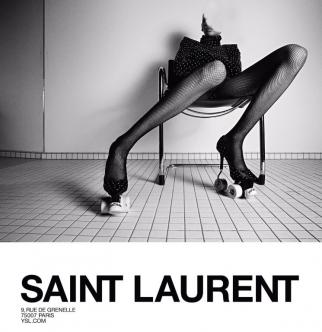 A French advertising watchdog has asked YSL to stop the campaign immediately.

The French fashion house, which welcomed celebrities including Kate Moss, Catherine Deneuve and Zoe Kravitz to its runway show last week -- and just reported its sixth consecutive year of growth -- has a history of controversial advertising.

A 2002 ad featured male full-frontal nudity, and in 2015 an ad was banned by the U.K.'s Advertising Standards Authority for the irresponsible use of an ultra-thin model.

The latest campaign will be discussed at a meeting with the ARPP's associated body, the Jury of Advertising Ethics, on Friday, with a decision published next week.

Yves Saint Laurent did not respond to a request for comment. The images remain on its social media feeds.