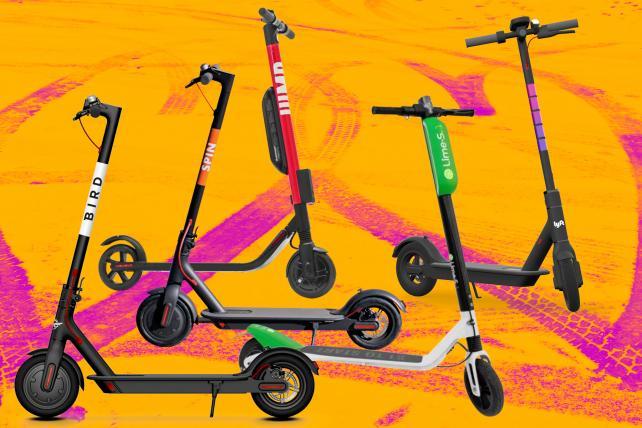 The following dispatch from SXSW was written by a creative director at a multinational hospitality company, attending the conference for the first time. Here, he reviews the various rentable scooter options found throughout the city.

Greetings from Austin, where there are piles of these scooters laying around like garbage. There's Bird, there's Lime, there's Spin. As a first-timer at SXSW, I was admittedly unprepared for the sheer volume of choices in the pay-to-scoot space. Each looks more or less exactly like the other--because, well, they are. As Ogilvy (must have) said (right?), "great brands are built on intangibles." With that in mind, I decided to take a look at the more esoteric qualities of the scooter options to help inform your own decision, should you be in a similar situation.

In the kingdom of largely undifferentiated electric skateboards, will brand truly be king? Let's find out!

The lightweight, tubular aluminum frame of Bird's classic model is a breeze to lift over scooter-restricted area barricades, and is theoretically useful for hand-to-hand combat in VIP line disputes. It goes fast, slightly faster than you're comfortable with if it's your first time on a motorized scooter, and the smaller wheels made the ride a little bumpier, creating an overall sense of unease. Bird also takes a different approach to payment with its prepaid credit system. This causes the rider to constantly want to check his balance on his phone so he doesn't automatically re-up, rather than just zenning out and enjoying the ride, and not crashing into things.

Verdict: you took my scooter virginity, but I'm just not ready to commit. 3/5

Lime is a sturdy, robust, welded metal beast, covered in pneumatic cables and a bright green sound-making box on its front. Not stylish, but comparatively tanklike, it's probably more likely than the other scooters to survive a collision with another vehicle, which is to say: not at all likely. Perhaps Lime might consider adding a feature that dispenses lime-scented air freshener as a USP.

Verdict: Guys. Would springing for a paint touch up kill you? They look like they got dragged behind other scooters. 2.5/5

The most stylish of the scooters, Lyft's sleek black profile is accented by a saucy pink-to-purple fade decoration. Lyft scooters are part of the Lyft family of transport brands, so you get the sense that riders are treated way better, and they're just, like, better corporate citizens. Scooter unlock is done directly through the Lyft app, making self-congratulation seamless.

Verdict: wokeness is even more convenient and mobile! 4/5

This is a bright fluorescent orange scooter by Uber, which lead me to wonder: why is it called Jump instead of Uber, or UberScoot, or scooUber. What are they trying to hide? Anyway. Overall scooter construction is sturdy, powerful, and reliable. The pricing regime is better than others, offering free unlock as opposed to $1 unlock for competitors. It is by far the most prevalent scooter brand at SXSW, boasting huge lounges on the street where riders can charge phones, grab swag, and choose from scores of identical scooters. All of which gives one the sense Uber has waited for pioneers to problem-solve in the space, and has now jumped in to bury the competition under mountains of capital. Oh, okay, that's why it's called Jump!

Verdict: while I do respect the convenience and coverage, I get angsty about the mismatch between the "happy-go-lucky scooter" and "category crushing overlord" vibes. 4/5

The rarest scooter at Southby, this jaunty ride stands out for its gray plastic frame and, presumably, its ability to confer bonus points or possibly magical powers when riding. Catch them while you can, though. I was unfortunately unable to test a Spin, as the three I located all had dead batteries. It's possible I just didn't want it enough and the scooter was negging me. The people I did see riding them appeared to have achieved another, better level of scooting.

Verdict: for my money, je ne sais quoi wins out over tangible benefits, but your 15-cent-per-minute mileage may very. 5/5