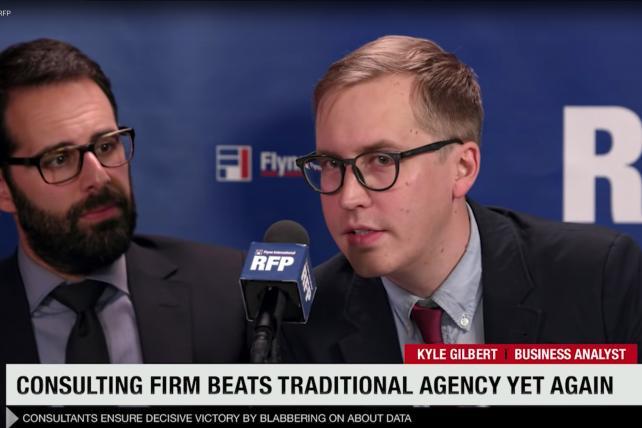 It's a fictional scenario from a new video from Canadian shop Zulu Alpha Kilo. But if some of the stories I hear are true, it's not that fictional.

The agency has launched a new site called smarterpitch.com with the aim, it says, to kickstart a conversation on ways clients, agencies and consultants can improve the process.

The video, modeled after a post-game media scrum, features the losers and winners of a creative pitch. The winner, a consulting firm, says its key to winning was "Data: deep data, big data, data analytics. We had to mine the data, take the discrete data and aggregate it." (Asked by an audience member if this approach was devoid of emotion, one of the consultants answers "the data doesn't support that.")

And a sad clincher: Asked how it feels to win as an AOR, the client grabs the microphone and says "No, they actually won the chance to be part of our pool of creative agencies, so they have the chance to pitch on individual projects." It comes as a surprise to the "winner."

Zulu's site suggests that clients not hold a cattle call by asking 25 agencies to participate: "Agencies aren't cattle. When a client invites everyone and their kitchen sink to a pitch, it's a clear signal to us that they have no idea what they want from a potential partner." It also asks that clients be articulate about what exactly they're looking for, and to map out the process and expectations for participating agencies.

The website asks for industry folks to weigh in using the hashtag #smarterpitch on the website on tips, advice and commentary.

Once the secondhand anxiety from that video wears off, read on for this week's agency news. See you next week!

SAG/AFTRA members rallied this week with a mock bake sale in front of the offices of Publicis-owned BBH — the agency recently withdrew from its SAG/AFTRA contract, with which it had been a signatory for two decades. The sale, where "thousands of baked goods were handed out," was meant to insinuate the agency is in need of funds since it can't afford to pay actors fairly.

"BBH complains that paying performers a living wage is just too expensive and they don't have enough dough to pay us, so we're helping them out with some dough of our own," said SAG-AFTRA Exec VP and New York local president Rebecca Damon in a statement.

"While BBH recognizes SAG-AFTRA's right to demonstrate, we stand by our decision to exercise our legal right to not renew our participation as a signatory to the SAG-AFTRA Commercials contract," the agency said in a statement. "We immensely value the creative talent we work with, and this decision does not change our commitment to fair wages and working conditions. We simply need the flexibility that this current contract does not allow in order to continue to do great work with great actors, both SAG-AFTRA and non-SAG-AFTRA talent alike."

Doner recently won McDonald's national field activation program account, previously handled by Moroch. Now, it's Doner's turn to localize, adapt and create regional work based on ideas from McDonald's national creative agency, Omnicom's We Are Unlimited. Say there's a breakfast campaign, for example: Doner will research breakfast sandwich to highlight based on the popularity of the various items by region.

Doner also won two more local accounts. The Greater Indiana co-op was previously handled by H&L, while the Susquehanna co-op covering most of Pennsylvania, excluding Philadelphia, was previously handled by Lopez Negrete. Doner already had two other co-ops, Michigan and Georgia (excluding Atlanta). The agency's co-op roster is now nearly 1,000 restaurants (out of the 14,000 or so McDonald's in the U.S.) McDonald's confirmed it switched field activation agencies but declined to comment on any co-op agency changes. Co-ops can choose to work with any of seven agencies selected in a pitch process last year. All local media buying is now handled by Omnicom's OMD.

The J. M. Smucker Co. announced a major marketing overhaul it says took just four months. The new "Power of One" model includes having Publicis Groupe run most of its work, an account the holding company won over WPP and IPG. Smucker previously had about 12 marketing teams, each with its own agency relationships across a variety of shops. Now, Smucker has three multi-disciplinary teams, one for each of its main business units: coffee, pet food and snacks, and consumer foods. Each of those teams gets a dedicated Publicis team comprised of people from a range of the holding company's agencies. "One of the most critical objectives was to inject agility into the organization," Geoff Tanner, senior VP, growth and consumer engagement, told Ad Age. Expect new work on brands such as Folgers and Milk-Bone next spring, when Smucker's next fiscal year begins. The company is set to increase its overall marketing spending by about $80 million to roughly $580 million.

Marc USA has named a new president: Cari Bucci Hulings, who joined the agency in 2010 as senior VP and director of client services and became exec VP and general manager in 2012 after helping grow the agency's Chicago office.

Marc Bignell has joined GroupM as its global head of trading. He was formerly chief commercial officer at Miroma.

Todd Riddle has been named Commonwealth/McCann as its chief creative officer for global markets. He was formerly an executive creative director at Deutsch