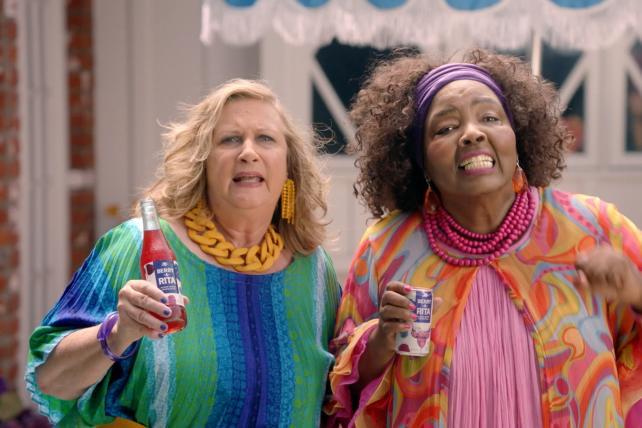 There's a reason I report on agencies and not football. But today, dear readers, you get a little bit of both.

This weekend, I'm headed to Chicago for a long-weekend sports extravaganza of da Bears, da Cubs and da hot dogs (as many as are humanly possible). My family likes to joke that I get my best texting done at athletic events, so you might hear from me.

Let's do a lateral (please note my flawless usage of football terms here): Ritas, which tells Ad Age in an email that nearly half of the NFL's audience is female, is targeting female football fans this season with a series of campaigns across TV, digital and social channels to promote the Anheuser Busch line of flavored, sparkling margaritas.

In a spot from Fallon NY called "Hail Berry," the brand tapped former NFL quarterback Matt Leinart to announce the brand's fall flavor, Berry-A-Rita. A group of Ritas (which it says are "legendary ladies who have lived life and know how to have a good time") show Leinart how to "Hail Berry," a twist on the "Hail Mary" pass.

The spot runs during NFL programming until later this month. Ritas also tapped Funny or Die for a short webisode series showing the Ritas selecting their teams for a football pool.

Well, that's enough sports for me—we don't want ESPN pounding my door down or anything. Have a great weekend, everyone, and GO BEARS.

Fried rice fans, set-your-calendar reminders
Benihana has declared Sept. 20 National Fried Rice Day, and to celebrate its own holiday, it plans to have chefs in New York and Chicago do 42-hour marathon cooking sessions Sept. 18-20. Benihana's hope is if all goes well, it'll set a new Guinness record for the longest cooking marathon. An adjudicator from Guinness will be on hand to keep an eye on things. What happens with all that rice? Benihana, along with Feeding America, plans to give it to City Harvest in New York and Cornerstone Community Outreach in Chicago. Patrons, meanwhile, can get free fried rice with an entree purchase on the 20th. The restaurant is working with Cramer-Krasselt on the promotion.

Wunderwoman
You probably heard that Mark Read stepped up to the role of WPP CEO last week, meaning WPP shop Wunderman was out a global CEO. The digital agency this week announced that Mel Edwards would be filling the role, overseeing 9,200 employees across 200 offices in 70 markets. She has been with Wunderman since 2012, the past three years as CEO of Wunderman EMEA.

From Starbucks to just bucks
JPMorgan Chase has tapped Leanne Fremar as chief brand officer. She'll manage internal agency Inner Circle as well as external agency partners (Chase works with agencies including Droga5 and Vayner Media). A brand vet with stints at Under Armour and Ralph Lauren under her belt, Fremar was most recently at Starbucks, where she spent nearly two years as executive creative director. At Chase, she'll lead brand strategy for Chase, JP Morgan, and JPMorgan Chase, and report to Chief Marketing Officer Kristin Lemkau.

Starbucks has not appointed someone to replace Fremar. For the interim, Starbucks brand creative oversight will led by Starbucks Chief Marketing Officer Matthew Ryan and Chief Design Officer Liz Muller.

On the move…
Liz Paradise has joined Omnicom's Bright Red as its first chief creative officer. She was previously director of creative at Disney's Yellow Shoes, the Walt Disney Company's in-house agency.

Dentsu Aegis Network has promoted Christian Vollerslev to president of Posterscope U.S., where he is currently chief commercial officer for DAN U.S.

Engine, the marketing solutions company that just hired UM's Kasha Cacy as its global CEO, has hired Jim Moffatt as its CEO for Europe and Asia Pacific operations. He was most recently executive VP and managing director for Asia Pacific at R/GA.