See how brands are promoting empowerment for International Women's Day

Brands from Etsy to Walmart to the U.S. Air Force are running campaigns this year for International Women's Day to celebrate women's empowerment, honor their achievements or call for more progress on gender equality.

GRRRL Clothing, working with creative agency LO:LA, posted Instagram videos calling for an end to racism, body-related bullying, domestic violence, sexual assault and inequality. One video opens with a voiceover saying: "When we told you 'no,' that should have been enough. When we say 'stop,' you stop." To get that message through, the women in the video leave messages behind at stop signs in downtown Los Angeles.

Walmart released a commercial about women executives who worked their way up the ranks of the company after starting out as cashiers, trainees and interns. "In 2018 alone, over 150,000 women were promoted at Walmart," the ad says.

The U.S. Air Force, meanwhile, teamed up with GSD&M on "U.S. Air Force: Origin Story." Brig. Gen. Jeannie Leavitt gathered dozens of women pilots to appear in hopes of inspiring more women to join up. The spot nods to the film "Captain Marvel," about a female fighter pilot-turned-superhero; the movie's star, Brie Larson, turned to Leavitt for inspiration.

The video opens with a voiceover: "Every superhero has an origin story. We all got our start somewhere. For us, it was the U.S. Air Force." (The ad was released days before the Air Force came in for criticism from Sen. Martha McSally, the first female Air Force fighter pilot to fly in combat. She revealed that she had been sexually assaulted by a superior while in the military, and she criticized the military's reaction to her disclosure.)

Etsy, the online marketplace, is honoring notable women from the past and present with a Fearless Women Capsule Collection, which includes prints of Rosa Parks, Amelia Earhart and Jane Goodall, a Jane Austen cookie cutter, a Sojourner Truth poster, a Malala Yousafzai vinyl sticker and an Ada Lovelace pint glass, among others.

GoDaddy, the web hosting company, is temporarily changing its logo to "GoWomen." SodaStream has a limited-edition "She" reusable bottle, which celebrates women's achievements and urges people to make more environmentally conscious consumer choices.

In celebration of IWD, Hulu's famous female faces will be appearing alongside inspiring quotes on 180 digital billboards across the U.S. The celebrities include "Handmaid's Tale" actress Elisabeth Moss and author Margaret Atwood; comedian/producer/writer Mindy Kaling and actress Yvonne Strahovski.

"We no longer are living in the gaps between the stories...we are writing the stories ourselves" says Moss on her billboard, while Kaling's sign reads, "If you don't see a clear path for what you want, make it yourself."

On the platform itself, Hulu also curated five female-focused collections, such as one dedicated specifically to International Women's Day, and others with subjects such as "Female Icons," "Female Creators," "Women in Sports" and "Women in Comedy."

Dove Chocolate is opening a new marketplace in Africa dedicated to supporting female entrepreneurs. The Mars-owned candy brand has partnered with humanitarian nonprofit CARE, which focuses on eliminating poverty around the world, to launch the market in Gueyo, a cocoa-growing village located in Côte d'Ivoire, West Africa.

The Gueyo market is set to open in July and gives women of the village a place to sell their goods and spaces to organize meetings. The overall goal is for the women to achieve financial independence and reinvest in their cocoa-growing communities.

Another campaign in Kazakhstan shines the spotlight on female entrepreneurs--through scent. The country's ForteBank created a fragrance, ForteFemme, which it sent to 2,000 female businesswomen in the country and encouraged them to spray it on the cash used by their businesses. The banknotes then went into circulation and are now being dispensed by ATMs.

The campaign, by Moscow-based agency Voskhod, also features a TV ad that appears to be a traditional fragrance spot until it's revealed the bank is behind the scent. The women featured are all real-life businesswomen.

In Korea, Nike is urging women to "choose phenomenal." A new spot from Wieden & Kennedy Tokyo features everyday Korean athletes, as well as celebrities and K-Pop stars. They include singer-songwriter Amber Liu, K-pop star Chungha, soccer player Ji So-yun, comedian Park Na-rae and golfer Park Sung-hyun. The spot opens with a Korean tradition called "doljabi" in which a child is presented with a range of toys on its first birthday that it can pick from in an act that portends their future career. It goes on to urge women to express themselves and ends with the line, "You are the greatest work that only you can make." It's part of a wider Nike campaign that will include a "Phenomenal Festival" of sporting and cultural events.

In time for IWD, skate brand Vans debuted its global campaign "Vanguards" with a new film featuring a badass group of female skateboarders including U.S. X-Games champ Brighton Zeuner, Japan's Mami Tezuka and Brazil's Yndiara Asp, who are all bringing style and innovation to the sport. On IWD, Vans will be debuting a new series of workshops for women across the world, continuing a global initiative it introduced in 2018 to bring more females into skateboarding. 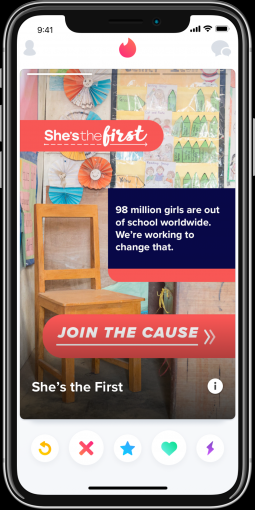 Dating app Tinder is celebrating IWD across a number of programs. The company announced it will be offering up to $1million of free advertising each year to nonprofits, including those dedicated toward supporting women. "She's the First," an organization that fights gender inequality through education, is one of the first beneficiaries and will be launching an in-app ad on the platform. Tinder also unveiled a new female internship program to help ensure that 65 percent of its interns are women and finally, the company said it hired analytics firm Syndio to do a comprehensive pay equity audit of the company--ultimately revealing that Tinder was A-OK on that front, with no pay discrepancies attributable to gender difference.

Elswhere in adland, Dublin-based Boys&Girls creative agency is promoting a three-fingered "W" salute to women with the hashtag #SaluteWomen; it's a revamped version of the peace sign, reinvented for the #MeToo era.