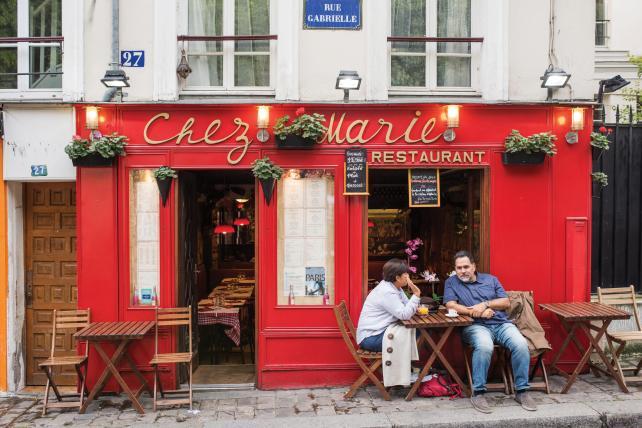 This summer, during the World Cup, BETC Paris broadcast the games on a giant screen outside its canalside office northeast of the city and invited the local community to picnic, play soccer and tour a soccer-themed art exhibit inside its ultramodern offices inside a former warehouse. When France won the final, the scene turned into a party.

"We had thousands of people joining us," says Rémi Babinet, co-founder of the Havas Group-owned creative agency known for its work for Evian and Air France. "It was in the dead of a heat wave, and people were jumping into the canal from the joy, and to cool off."

Three years after the terrorist attacks that killed at least 130 people in the city—including three who worked in advertising—Paris is in the midst of transformation. France won the World Cup and is looking ahead to 2024 when it will host the Summer Olympics (a bid it won with help from BETC, Havas Sports & Entertainment and FullSIX). President Emmanuel Macron, elected last year at age 39, has been rebranding the country as friendly to business and innovation. France ranks as the eighth-biggest ad market, according to Zenith, and is home to luxe brands like LVMH, Chanel and Hermès as well as multinationals like L'Oréal, Danone and oil giant Total.

It's not surprising, then, that Paris is home to a thriving digital startup scene. Station F, which bills itself as the world's largest startup campus, is in Paris, and both Facebook and Google are investing in the City of Light as a hub for artificial intelligence. It's a construction zone, too: In the works is a massive transport project to link the touristy heart of the capital and multicultural suburbs like Pantin, where BETC has its office.

Paris' advertising scene is dominated by two giants: Publicis Groupe, No. 3 on Ad Age Datacenter's list of the biggest global agency companies by revenue, and Havas, No. 11. At a time when the tried-and-true model for holding companies is in question, Publicis and Havas have retooled themselves to bet on the future. Publicis made major tech investments, buying digital players including Sapient, and co-hosting Paris' VivaTech conference. Havas, meanwhile, has positioned itself to leverage entertainment content and talent, since it's now part of Vivendi, which is also the parent company of Universal Music Group and Canal Plus Group.

"You've got the two dominant players taking different paths, and it will be interesting to see what happens in the near future," says Charles Georges-Picot, global CEO of Publicis agency Marcel.

Geographically, agencies are scattered throughout the city and into the suburbs. Havas headquarters is just west of Paris, with a panoramic view of the city. Publicis Groupe has its headquarters on the Champs-Elysées, overlooking the Arc de Triomphe; it's been there since 1958. It also has a huge tech-savvy campus across the city near the site of the Bastille, and it's planning a third major hub in the capital, says Agathe Bousquet, who heads all of Publicis Groupe in France.

"We're very inspired by our city—its lifestyle, its humanism, its openness," she says.

Like everywhere, Paris' ad scene is faced with the question of how to make its workforce more representative of society. Publicis Groupe has several women in top positions, including Bousquet and Valérie Henaff, CEO of Publicis Conseil and Publicis Worldwide, along with Anne de Maupeou, the respected global chief creative officer of agency Marcel. One of BETC's co-founders is a woman, Mercedes Erra, and the agency says 52 percent of its Paris management is female.

Diversity is a topic of discussion, but not perhaps as much as in the U.S. In France, "in this business, there are not a lot of Asians, blacks or Arabs," says Georges Mohammed-Chérif, founder, president and executive creative director of indie shop Buzzman. And minorities are not as common in TV ads, he says.

Some brands have taken a strong point of view. Nike, unsurprisingly, has delved into life in the neighborhoods that are home to many second- and third-generation immigrants. Nike and Yard—a startup shop that focuses on urban youth culture, recently acquired by Sid Lee—renovated the abandoned soccer field outside Paris where 19-year-old Kylian Mbappé, the star of France's World Cup team, played as a child, and there's been interesting Nike work from the shop.

BETC, meanwhile, put its headquarters in a multicultural working-class neighborhood; it's trying to be a kind of community center, with events and art exhibits open to the public. And it's involved in the conversation about "Le Grand Paris," the plan to better integrate the marginalized suburbs with the city center familiar to tourists. The agency recently put out a tourism guidebook for "Les Grands Parisiens," spotlighting the suburbs along with Paris. It includes everything from farms to museums to street art and, of course, there's an entry for BETC's headquarters/cultural center.

France is evolving, but in some ways its ad scene remains … so French.

"I can shortlist things like insane holidays, or people refusing to email you back" because they're having a two-hour lunch, says BETC's Babinet. "The French way of doing things is mostly done without a rule book, it's less politically correct, less processed and [there are] more emotional arguments. Yelling is normal, it's how we work."

Another particularity in France: Advertising haters sometimes deface posters in the subway, and there are a few anti-advertising organizations. "In France there are a lot of people who don't like advertising, who mistrust it," says Buzzman's Mohammed-Chérif. "For a creative like me, that's actually good news. Because you're obliged to make more effort getting people interested."

Canal Saint-Martin
This neighborhood along a Paris canal is home to creative types. It's lined with cafes and shops like Artazart (83 quai de Valmy), an artsy bookstore with a red façade..

Montmartre/rue Lamarck
The top of Montmartre is a tourist trap, but down the hill are tree-lined streets and cool cafes. The charming rue des Saules is home to a tiny vineyard.

Rue du Faubourg Saint-Denis
This multicultural area near two train stations is a hipster hangout. Chez Jeannette, a traditional but faded bistro, has DJs at night.

BETC—Les Magasins Généraux: 1-13 rue de l'Ancien Canal, Pantin.
BETC's office, a former flour and grain warehouse on a canal north of Paris, has rooftop gardens (with a bee colony), an art gallery, a cafeteria staffed by chefs and nearly a mile of balconies.

Buzzman: 126 rue de Lafayette
The indie agency has offices in a grand old house decorated with antiques and the odd oil painting.

Rosapark: 7 impasse Charles Petit
This Havas Group agency has an airy office space in a neighborhood with great cafes and restaurants.

Publicis Groupe: 133 avenue des Champs-Élysées
A terrace overlooks the Arc de Triomphe while downstairs is the Publicis Drugstore, a chic concept shop that sells jewelry, perfumes, books and more. Plus, there's a restaurant and movie theater.

Deyrolle: 46 rue du Bac
This beloved taxidermy shop on a tony street has been around since 1831.

La Coulée Vert:
An old elevated railroad track has been converted to a garden-filled walkway.

Urinals: Quai d'Anjou
A few controversial red urinals have popped up to prevent public urination. One is near the poet Baudelaire's house on the Île Saint-Louis.

Boating: 37 quai de la Seine
Electric boats can be rented at Marin d'eau douce for a cruise along Paris' canals.

Hôtel Grand Amour: 18 rue de la Fidélité
From graffiti artist and nightlife guru André Saraiva, this is a great place to have a client lunch or a drink after work.

Hôtel Bourbon: 39 rue des Petites Écuries
This nightclub, once a synagogue, is frequented by The Weeknd.