The Grand Master of Public Relations

At 91, PR Maestro Harold Burson Is Sharp as Ever and Ready for the Next Client Crisis

It's not easy getting on Harold Burson's schedule.

A first attempt found him traveling to Burson-Marsteller's Asia offices. As his assistant said when rescheduling our second meeting (admittedly delayed on my part), "Unfortunately, Mr. Burson's calendar fills up pretty quickly." We picked a third date, but I got a call apologizing that he was stuck in back-to-back client meetings. 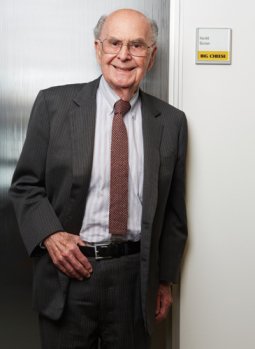 This tightly packed agenda might be no big deal for a middle-aged CEO, but it actually belongs to a 91-year-old public-relations veteran who relinquished his official CEO title in 1988. Over the course of that career, he built the Burson-Marsteller network by providing counsel to both squeaky-clean consumer brands and controversial corporations knee-deep in crisis. Now when he's not traveling the globe on business, he comes to the office every day to consult with clients, interact with people in his far-reaching network and work on his memoir.

When I finally met with the PR legend in his corner office in Manhattan's Gramercy neighborhood, I took a seat in one of four rocking chairs facing an antique radio -- a hint of warmth in the corporate environment -- and Mr. Burson took me back to Memphis. His early PR experience came at the University of Mississippi, where he generated publicity for the school with local newspapers. He also worked as a stringer at Memphis' The Commercial Appeal to pay for college, and continued to write for the publication after graduating.

It was the beginning of World War II and Mr. Burson was covering the controversial construction program of a large ammunition plant outside Memphis that sparked a labor dispute -- and national attention. The gig would eventually land him his first real PR job and, more importantly, take him to distant New York. For three years, he handled publicity for the owner of the engineering company that had been involved in the labor dispute. Mr. Burson left to join the Army in the early 1940s, and in 1945 he transferred to the American Forces Network as a reporter assigned to cover a Nuremberg trial. Soon after, he moved back to the U.S. in hopes of jump-starting a PR career with his old engineering company. "I didn't want to return as an employee," he said. "I proposed I start my own company, and they become my first client."

In 1952, Mr. Burson got a call from a New York Times friend who said Bill Marsteller, the founder-CEO of an ad shop, was looking for PR support for a Rockwell International project. "We shared the same values," said Mr. Burson. "I didn't want to be the department of an ad agency, but we felt that in the B-to-B space, integrated marketing made more sense." And so the partners teamed up to provide an integrated service called "total communications."

There was a knock at the door. An employee popped in to say that a prospective client with whom he had just met sends Mr. Burson his regards -- Mr. Burson had worked with him in the past. He turned to me and laughed: "I get at least a few of those a week."

His is one of the widest-reaching networks in the PR industry. But his first big break didn't come until the early 60s, after the Treaty of Rome created a European common market ripe for B-to-B imports from the U.S. In 1961, Messrs. Burson and Marsteller opened an office in Geneva, becoming only the second PR firm to go international.

Because Mr. Burson was born to English parents, Europe was not a foreign concept, nor was the risk-taking. When Mr. Burson's father moved to Memphis, he started a hardware store just in time for the Great Depression. When the senior Mr. Burson was out of work and in poor health (he had been gassed during World War I), Mr. Burson's mother supported the family. She bought clothing at a wholesale outlet in Memphis and sold the product in African-American neighborhoods. "If she ever had $25,000 at one time, she could have been Sam Walton," said Mr. Burson. "She was the greatest influence of anyone on me. She gave me such confidence in myself. I really never had a feeling of insecurity in my life."

When the firm expanded globally in 1961, the only other PR agency with a significant presence in Europe was Hill & Knowlton, a shop 20 times the size of his own. Burson-Marsteller had yet to do $1 million in revenue. "It was the most important decision I ever made," said Mr. Burson. "It hastened our growth cycle, and for 25 years we were the only two international firms."

Today, the company is WPP's largest PR-agency network, generating almost $500 million in worldwide revenue in 2011, according to the Ad Age DataCenter. Much of that growth began with global advice to clients.

"In anticipation of growth and corporate needs, [Burson] was reading aggressively on Asia and alerting us to the prospects there," said Ray Jordan, the long-running Johnson & Johnson communications chief who recently joined Amgen. "A constant with Harold is his intellectual curiosity in trends in business and society."

While globalization presented abundant opportunity, conflicts in the B-to-B space were limiting growth; it was time to diversify. The shop acquired a New York firm specializing in lifestyle and food. The move not only added expertise in a new area but boosted the female headcount from one -- a PR specialist who came onboard in 1967 to work on a B-to-B account -- to more than 30. The times were changing.

By the disco age, the firm had built its corporate brand portfolio and expertise with the addition of quick-service-restaurant accounts (though never at the same time) Burger King, Wendy's and McDonald's. In 1979, Mr. Burson and Mr. Marsteller sold the firm to Young & Rubicam, which was later acquired by WPP.

Around this time, he also acquired a firm in D.C. and planted the seed for the firm's public-affairs reputation. Mr. Burson recalled an example of that work involving a phosphate client. Environmentalists had complained about the harmful effect of detergent phosphates on the ecosystem after they reached bodies of water through sewage plants. Mr. Burson and his team worked with the League of Women Voters to put pressure on the parties involved to resolve the issue. The sewage plants were upgraded to automatically remove the phosphates, and the client didn't have to re-engineer the detergent materials.

Over time, the firm has been through six CEOs and shifted to become a famed public-affairs and crisis powerhouse whose past roster included Philip Morris; the current one includes controversial Asia-based tech manufacturer Foxconn. "No client was so divisive that it would have upset our own people and make clients uncomfortable," said Mr. Burson, referencing a few cases in which he has helped a client defend its right to stay in business without getting involved in the controversial elements of the client's work.

One such client was Philip Morris' parent, Altria. Former Chairman-CEO Geoff Bible recalled a time when Mr. Burson's firm supported his company in various regions, including Thailand, where an individual had threatened to inject cigarette packs on the shelf with poison. "It was a very worrying time," Mr. Bible said. "When we had Burson-Marsteller on hand in case things went pear-shaped, they did a very good job."

The firm, along with most of the industry's holding-company-owned PR shops, has an anti-tobacco-client policy. But under recent leadership it has fumbled over sensitive issues. In one instance last year it instigated a smear campaign against Google for then-undisclosed client Facebook. Mr. Burson said the firm typically declines business if the client is unwilling to be transparent. But when asked whether he would handle things differently now, Mr. Burson said he wouldn't dare interfere. "I've not been CEO since 1988. I ran this show for 35 years and won't second guess my successors."

Mr. Burson lives on Manhattan's Upper West Side. He moved out of the suburbs and back to the city last year after his wife passed away. He stays sharp by reading the classics—he's currently in the middle of William Faulkner's "Absalom, Absalom."

Our long-delayed meeting over, Mr. Burson walked me out on his way to meet an acquaintance for lunch in the neighborhood. (He counts among his personal friends ballet dancer Mikhail Baryshnikov, cabaret singer Barbara Cook and the late Mary Travers of Peter, Paul and Mary, the last a Burson alum.)

When we arrived at the entrance to the elevators and stairs on the second floor, he turned to me, seemingly chagrined. "I'm sorry, I have a hard time with the stairs these days. Do you mind if we take the elevator?" After saying goodbye outside, Mr. Burson took small strides down the street without an assistant or car. He may appear somewhat frail, but his independence in travel and thoughtfully honest responses to questions suggest a sharp and seasoned PR executive -- and a well-respected one.

"Make no enemies -- I think that 's one of the great lines I heard in my life," said former Altria CEO Mr. Bible. "I must have made a million, and he made none."