NEW YORK (AdAge.com) -- In-house agency bars -- seemingly a relic of 1960s Madison Avenue -- look to be all the rage once again. 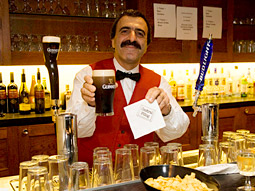 Havas' Arnold boasts a newly minted one; WPP Group's JWT recently revamped a huge space in its New York office dedicated to its bar; and BBDO's is still going strong after more than 30 years. Publicis Groupe's Digitas, meanwhile, has a beer cart that travels the office.

Maybe they're mesmerized by the popular TV drama "Mad Men" and are trying to emulate Don Draper and his cronies at the Sterling Cooper advertising agency. Maybe they're just trying to emulate British agency culture. Maybe the bars are merely a fun value-add to help attract talent, or even a tactic to boost morale. We're not quite sure how, precisely, to account for agencies reverting back to booze culture. But either way it's clear: Bars are back.

It should be noted they are generally nonprofit, offered as a perk for employees, and in most cases serve as a way to promote alcohol brands on agency rosters. During the nonparty hours (we hear Thursdays are the most popular night), many of the spaces are a venue for informal meetings or a place to simply take a breather during the workday.

What follows is a smattering of hot spots where creatives, account managers and planners around the country are boozing nowadays.

BARNOLD
ARNOLD, BOSTON
Known to host a roving keg party, the folks at Arnold already knew how to have fun. But leaders Pam Hamlin and Pete Favat decided in April 2008 that the time had come to open a proper bar. It's stocked with liquor from the agency's Brown-Forman clients, including Jack Daniel's and Southern Comfort. The stark white space has already attracted foot traffic from staffers in a variety of ways: twice a month during agency "town hall" sessions; when teams and departments book time there for celebrations (the agency's recent win of Carnival Cruise Lines' account was one such occasion); and for new-hire receptions and client functions.
THE NEW BAR
JWT, NEW YORK
Here you might think you're in a Big Apple club rather than an ad agency. The huge and well-appointed venue, which just opened this year, features a 50-foot-long bar where employees belly up three nights a week for a full selection of spirits from client Diageo at subsidized prices. Bonus: an array of happy-hour foods such as wings.
BEER CART
DIGITAS, CHICAGO
The Beer Cart is open for business starting at about 4 p.m. on Fridays. It's operated by Digitas staffers who walk from desk to desk offering a selection of Miller beers (Digitas is Miller's interactive shop), water, soda, popcorn and occasional specialty drinks. Special-occasion Beer Carts have included a Cinco de Mayo-themed cart.
CENTRAL FILING
BBDO, NEW YORK
Established in 1976, Central Filing is an institution; in fact, when BBDO relocated from its Madison Avenue digs to its current offices on the Avenue of the Americas, the original bar was dismantled and moved. Open Monday through Friday in the evenings, the bar serves clients' products only, from Pepsi to Red Stripe to Gallo wines. Cash won't work here, as Central Filing currency comes in the form of drink tickets, doled out at low rates such as $1.25 for beer and mixed drinks or $2.50 for wine. Alternatively, agency staffers can elect a lifetime membership for $50.
THE SURF BAR
TBWA/CHIAT/DAY, LOS ANGELES
The aptly named Surf Bar at TBWA's Los Angeles outpost is beach-themed and was constructed using surfboards. It was erected nearly a decade ago and is primarily used for keg parties -- of the Budweiser variety -- as well as other parties and events. Client Absolut vodka is used for mixed drinks.
THE QUARRY
DAVID & GOLIATH, LOS ANGELES
In considering its new office space, West Coast indie creative agency David & Goliath insisted on a few things: plenty of space for its people to think, a barrage of war rooms and, last but not least, the Quarry. Measuring close to 16 feet of solid walnut wood, the impressive bar is a hub of social activity in the agency and occasionally has been used for client briefings. Clients 42 Below vodka and Cazadores tequila help keep the bar stocked.
TROLLEY
KIRSHENBAUM BOND & PARTNERS
The lore of Trolley at Kirshenbaum Bond & Partners dates back some 20 years to a time when the now-MDC Partners-owned agency was much smaller, and staffers regularly pushed around a liquor cart they affectionately dubbed "the trolley." These days Trolley has evolved into the term used for regular internal open-bar parties -- for which the agency serves up Diageo client brands Ciroc vodka and Don Julio tequila -- and frequent external agency gatherings. The most recent was held at New York City bar Antarctica.
DOG & PONY
GREY, NEW YORK
President Steve Hardwick had the idea to open the bar last summer and held a contest to choose the name, a nod to those incessantly rehearsed client presentations. It's open only on Thursday evenings and serves free beer and wine, along with live music and rotating art exhibits. On off nights it's dubbed Caf? Grey and doubles as a dining room. There's a bar area in the blueprints for Grey's new offices, where the agency aims to move in 2009. The name is expected to stick.
THE BAR
RIVET, ST. LOUIS
Employees at the shop formerly known as Zipatoni unwind at the agency's self-serve bar area complete with pingpong table. The bar was originally erected to support clients; it's stocked with Pabst Blue Ribbon beer, a client, as well as wine and other basic drinks.
THE BRAIN DRAIN
MINDSHARE, NEW YORK
This bar was inherited from WPP sibling Bates in 2004. Starting at 5:30 p.m. on Tuesdays, Wednesdays and Thursdays, MindShare employees head there for pinball and a cash bar that serves bottled beer and hard liquor, including client Imperia vodka.

Three key trends for agencies to watch in 2022: 4A's report