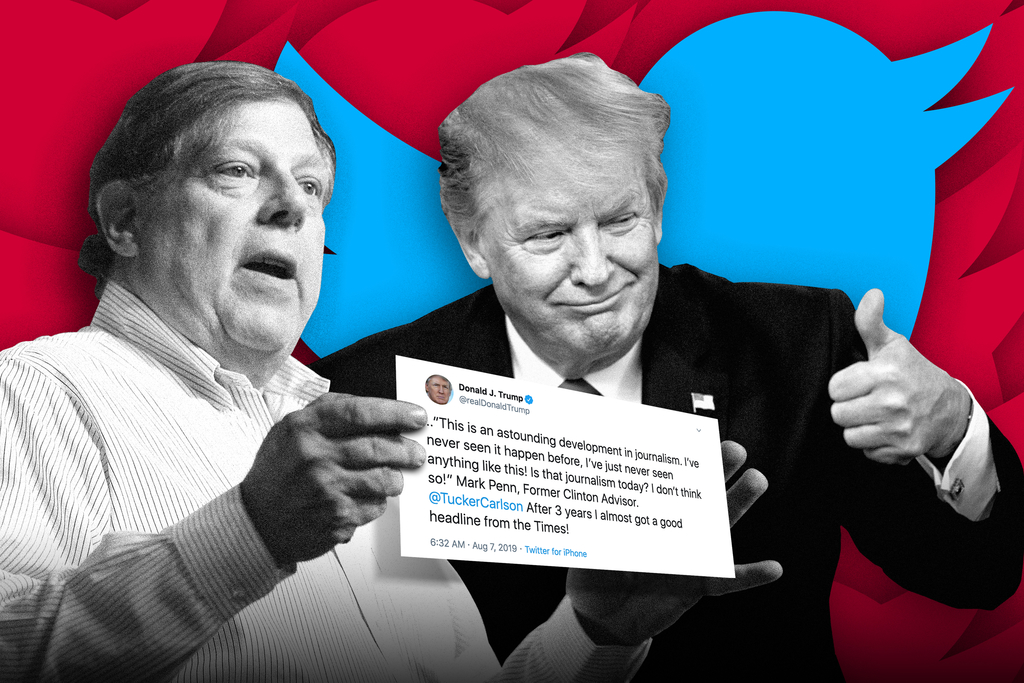 The Washington Post, citing sources, reported on Tuesday that Penn has been providing counsel to the president on the impeachment process. The Post reported that Penn visited the Oval Office last Monday to provide polling data and impeachment advice to the president while encouraging him to travel the country as President Bill Clinton did when he fought impeachment. Penn was one of Clinton's top strategists.

According to the Post, Penn reassured Trump that he would not be impeached and advised him to "stay focused on the substance" and to "not respond to anything" (advice the president seems to have passed on, given his tweets on the ongoing investigation into his dealings to press the Ukraine to probe political rival Joe Biden and his son Hunter).

An MDC spokesperson referred Ad Age to a statement Penn gave CNN—which also reported that Penn visited the White House—denying his assisting the president. "I am not in any way working for Donald Trump and not counseling him," Penn said via email to CNN. Through the MDC spokesperson, Penn declined to comment further, but did say he has not been paid by the president for any consulting work.

Another person close to Penn claimed "he was not in any way paid and no further visits are planned or expected."

This is not the first time Penn has been linked to Trump. He has previously made frequent TV appearances denouncing efforts to open an impeachment inquiry against the president. Trump himself even praised Penn in a tweet in August after Penn appeared on Fox News to condemn The New York Times’ decision to change a controversial headline, “Trump Urges Unity Vs. Racism,” on the president’s remarks on the mass shootings in El Paso, Texas, and Dayton, Ohio, that left at least 31 people dead.

..”This is an astounding development in journalism. I’ve never seen it happen before, I’ve just never seen anything like this! Is that journalism today? I don’t think so!” Mark Penn, Former Clinton Advisor. @TuckerCarlson After 3 years I almost got a good headline from the Times!

On a recent Ad Age Ad Lib podcast episode, Penn denied he is providing counsel to the president or any candidate declared for the 2020 election. He also noted that he would be dialing down his TV appearances. "I did a little commentary because I spent some time—a year of my life—defending president Clinton on impeachment," Penn said in September. "I’m pretty busy now. My commentary is trending down.”

"I've worked with Mark for over a decade and I've known him to be someone who is vocal about politics on both sides," Bassik told Ad Age. "He is a political student. I simply believe he calls it like he sees it. I think it's more academic and fun for him than it is him expressing partisan opinions."

One executive at an MDC agency told Ad Age on Wednesday that Penn visiting the White House to counsel the president on impeachment is "immoral and an offense to everyone who works for an MDC company and has been a victim of Trump's xenophobia, racism, sexism and misogyny."

"It's an embarrassment to all of us that the senior leader of our organization is conspiring with such an endeavor," the person said.

The executive said in an earlier interview with Ad Age that "It has nothing to do with politics; this is about morality." The person said to see his CEO "so out of line with my own beliefs, makes me feel like, wow, maybe these aren't my people."

To be sure, Penn has not always been aligned with Trump, having condemned the president's tweet in which he told four Democratic congresswomen of color to "go back and fix the totally broken and crime infested places from which they came."

It’s a sad day when a president tells elected representatives they should go back where they came from. This was stupid, offensive and should come down immediately.

“It’s bad for business,” one person familiar with MDC’s business but spoke on the condition of anonymity said. “Advocacy for Trump is repellent of at least 50 percent of our client and employee population, probably a lot higher.”

The person questioned where Penn’s priorities lie—in advancing his agenda as a political consultant or in advancing a publicly-traded company, one that is still in need of a significant turnaround as it faces $1 billion in debt. (Earlier this month MDC's stock fell 12 percent after the company reported a decline of 8.8 percent in revenue for the third quarter and revised its organic revenue expectations for the full year to now anticipate a decline of 3 percent to 5 percent.)

"Fuck this guy," said another executive at an MDC agency, who also spoke on the condition of anonymity, and noted that he started searching for a new job as soon as the news came through that Stagwell Group—the advertising, PR and data analytics holding company Penn founded in 2015—took a $100 million equity investment in MDC in March.

"I was taken aback," he said, adding that Penn "didn't do himself any favors" by touring the various MDC agencies to introduce himself when he was first installed. He described how during the visit to his shop, Penn was "interviewed" in front of the agency's staff and asked questions like "Coke or Pepsi?" When he was asked if he preferred Fox News or CNN and Penn allegedly pledged his allegiance to Fox, "there was an audible gasp in the room," the executive said.

"Most people weren't keeping up with who he is" prior to the investment, he noted, but that first visit "set the tone for the whole thing." Now, he said Penn's political associations are "common water cooler talk" among his peer group at the agency.

The executive is concerned with how Penn might influence the agency's work and clients, as he mentioned the new CEO is much more hands-on than his predecessors. "A million times more involved than I remember Kauffman being," he said, referencing former MDC Chairman and CEO Scott Kauffman, who stepped down in September 2018.

Most MDC agencies seem to lean left on political issues, supporting more liberal perspectives through their work. For example, 72andSunny last year created a two-story milk carton that displayed words like "love" and "freedom" to show what immigrant children detained at the border are "missing" (the name of the campaign), playing off old milk cartons that used to feature the photos of missing children.

Meanwhile Stagwell's properties include Targeted Victory, a digital strategy and marketing firm that describes itself as "the market leader in Republican fund-raising." Its website reads: "We're trusted by the biggest names in GOP fundraising like the NRCC, NRSC and Team Ryan because our platform deserves a better bottom line."

“I can’t think of any holding company head that was political," said one holding company CEO not affiliated with MDC. "Maybe in the 1950s. To be an open Trump supporter and to be overseeing people who engage in branding is baffling."

Several people familiar with holding company dealings have said MDC is one of the only ones that does not have a written rule against its executives and employees taking public political stances. An MDC spokesperson confirmed earlier that the company does not have any restrictions against executives making their political affiliations known.

"I'm a First Amendment absolutist, but for the head of a collection of creative agencies, some of the best in the world, who represent some of the biggest brands in the world, this is tone-deaf on every level," said a second leader at another holding company not affiliated with MDC who also wished to remain anonymous. "It's bad for business, bad for culture, bad for the country. To quote Trump, [Penn] should 'be quiet' and focus on his day job."