Retention Up 5% Since Shop Moved to Its New Space in January
READ THIS NEXT
Boulder breweries raise money for shooting victims, and Dentsu releases first DE&I report: Agency Brief

Marketing shop R/GA designed its new space with an eye toward making it more digitally connected, high-tech and physically mobile. Now, the agency known for its creative work for brands like Beats and Nike wants to help clients do the same, for a fee.

The agency is launching a new "Connected Design" practice in an effort to help new and existing clients revamp their office space. It moved into its new space at West 33rd street in New York City in January.

"I noticed when we were doing our space that there's not a company, agency or startup that's doing much of anything at all connecting physical space to the digital landscape," said R/GA CEO Bob Greenberg, who was inspired by his own new "connected home" in upstate New York. "Architecture and design has been something that's somewhat close to the agency business in a lot of ways."

It's not the first time the Interpublic agency is turning an in-house effort into a new revenue stream. The new venture is similar to the shop's attempt to replicate its own startup accelerator program for clients -- the agency helps clients find startups to invest in, gets paid a fee for doing so and takes equity in the startups it recommends to those clients. It also has a brand and corporate consultancy practice that's only a few years old. These non-traditional agency businesses over the past year have grown to about 30% of R/GA's revenue, the shop said. 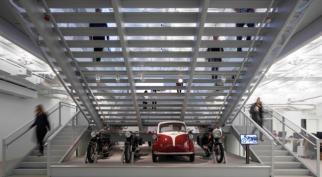 The shop is betting, based on early demand for its connected design offering, that the new group will contribute to that growth and to the attractive margins that can be better than those derived from traditional agency services.

As it offers to help companies design and redesign their corporate offices to function like its own, the shop is touting increased productivity and retention of its employees.

Mr. Greenberg expects its future clients' new offices can expect similar results. In R/GA's first five months in its more "connected space" employee retention is up 5%. The ultimate goal and "magic number" will likely be akin to the higher retention rates of tech companies, like Google and Facebook. Those companies are growing in cities like New York and forcing agencies like R/GA to offer more desirable workspaces if they want to keep their talent, explained Mr. Greenberg. 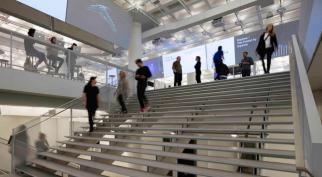 As the shop wins more clients – it's pitching for one design account in the Middle East, among other more local projects, and working with a few existing clients – it plans on hiring a dedicated staff to support the practice. Mr. Greenberg expects the staff to be around 10 full-time employees. Two existing staffers, Senior VP-Global Office Services Julia Goldberg and Executive Creative Director of EMEA James Temple, who spearheaded the agency's own office effort and are now working on revamping other international R/GA offices, will be part of that team.

One message the agency wants to communicate as it sells this capability is it doesn't cost more to have a "connected" office. R/GA's new office, for example, included 1,000 newly designed custom sit-stand desks on wheels, connected lighting that "follows the circadian rhythm of the day," new acoustics that "provide the perfect amount of buzz" and video conferencing that uses existing technology that connects all offices. The shop also decided to build a raised floor, running things like electrical wiring underneath, and reuse construction material to hang lights and build modular conference rooms, among other "innovations." Where the shop saves is by forgoing things like "fancy furnishings" and "wood paneling."

"Everything we used we made from things that were already out there," said Mr. Greenberg. "We just found new ways to use them."

Mr. Greenberg and his brother bought the agency's former digs on 39th street in 1984 before R/GA was part of IPG. They recently sold it for over $100 million, according to various real estate reports.