Rewind: From Mom Jeans to Musicals, a Look Back at eBay Advertising | Ad Age
Skip to main content

Rewind: From Mom Jeans to Musicals, a Look Back at eBay Advertising

The Brand's Past Campaigns, With and Without Goodby

Goodby, Silverstein & Partners has returned, once again, to take on creative work for eBay. The Omnicom agency has a long history with eBay, having handled the account or projects multiple times since 2002. Here, we take a look back at the brand's past creative campaigns, featuring everything from musicals and mom jeans to shoppable store windows and banner ads housing cooking shows.

In 2002, Goodby took eBay to Broadway for the marketer's first national TV campaign, which featured big production numbers like "Do It eBay," directed by Biscuit's Noam Murro, and "On eBay," directed by Sam Mendes, in his commercials directing debut.

This touching 2004 spot via Goodby and directed by Noam Murro demonstrated the "power of good" to illustrate the brand's then-new tag "The Power of All of Us."

In 2005, after six years with the client, Goodby lost the account to BBDO New York, which went on to create the cryptic "It" campaign, a multi-platform push that promoted the site as the place to get "whatever it is" shoppers are looking for.

Goodby had also teamed with CAA Marketing on branded content efforts, including the "Let Them Post" campaign, which tapped up-and-coming directors to create fun video listings to sell their wares. Director Jon Watts (now working on the 2015 Kevin Bacon feature "Cop Car") shot, and starred, in this one.

EBay eventually went back to Goodby and charged the agency with transforming its image from the place for flea market finds to a shopping destination for everyday necessities. The "Come to Think of It, eBay" campaign from 2009 included TV spots and digital vignettes starring comedians like Jim Gaffigan and Kevin Hart musing about various goods that could be purchased on the site, like this one in which Mr. Gaffigan contemplates toasters.

Perhaps the most interesting component of the above campaign was a series of rich media banner ads featuring mini-cooking and fashion shows to demonstrate eBay purchases in a dynamic way. In the ad below, for example, San Francisco chef Mark Sullivan, makes Moroccan spiced chicken.

Remember the YouTube video of the kid who freaked out over getting an Xbox 360? EBay and Mekanism leveraged that pop culture phenomenon in the "Love to Give" 2010 holiday campaign starring comedian Samantha Bee and encouraging customers to upload their own freakout videos, presumably featuring products purchased via the shopping site. 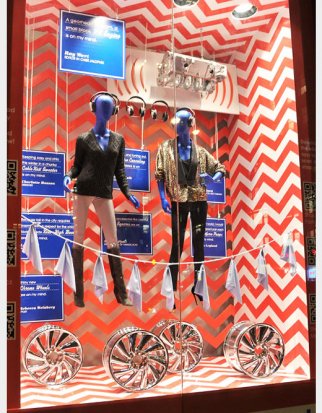 This out of home effort brought eBay shopping to the real world in 2011. Designer Jonathan Adler created a "shoppable storefront" featuring items curated by trendspotter types, such as Charlotte Ronson, Betsey Johnson and Gizmodo editor Matt Buchanan. Consumers could use the eBay app to scan QR codes next to the goods and purchase the featured items.

Venables Bell applied the window shopping idea to the holidays for this 2011 push promoting eBay's partnership with Toys for Tots. The interactive storefront hit New York and San Francisco and featured various goodies that shoppers could scan and purchase on the spot to donate to a child in need.