Behind the Work: W+K N.Y.Gets Melo To Dunk on Water | Ad Age
Skip to main content
Sign In Register

Behind the Work: W+K N.Y.Gets Melo To Dunk on Water

In the past few months, Wieden + Kennedy, N.Y. has given busy city dwellers plenty of reason to look up from their smartphones. For Heineken, the shop turned a garden-variety billboard into the backdrop for impromptu concerts in New York and Chicago. More recently, for Brand Jordan, the agency gave crowds a good excuse to gather along the Hudson River-- an all-out launch event for the Jordan Melo M8 featuring three-story-tall 3D projection of Carmelo Anthony dribbling, shooting and running on the water.

The monster Melo was the centerpiece of a multiplatform spectacular that kicked off at New York's Pier 54 with a breathtaking helicopter stunt and ended with surprise appearances from rap star Nas and Anthony himself in the flesh. Those not in attendance could also get in on the action through a special site, which eschewed traditional video in favor of HTML5-powered multiple, pop-up browsers --making for an online experience all its own. 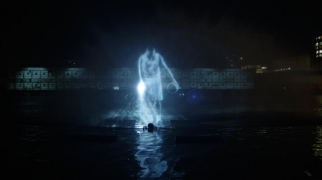 The brief from the client was to highlight Carmelo Anthony and his explosive game and align it with the brand in a larger than life, aspirational campaign. W+K didn't want to simply show power with a guy flexing his basketball skills on a court. "We wanted to do something more authentic," says Andy Ferguson, W+K N.Y. creative director. Art Director Asza West and copywriter Eric Steele came up with the idea of holograms on water and that was the team's "a-ha!" moment.

Once Pier 54 was selected as the location for the stunt, creative was molded to work with how Melo would interact with his surroundings.

Holograms-Just the Tip of the Melo

Wieden chose projection specialists Klip Collective to work on the 3D projection aspects of the event. The company has previously worked with clients like Target, New Balance and Charter and on projects like Syfy's "Follow the White Rabbit." For Melo, it not only created the animations and holograms but also directed the live-action components. "We didn't want a company that only did 3D mapping," says Dan Blaney, senior producer. "Klip specializes in creative applications of media technology. They shared our passion to create an experience using… existing technologies in a way that hasn't been done before."

And then there was the wishing, hoping and praying, a necessary part of any event-based campaign. The night before the event, the team had planned for a dress rehearsal using all the misters, holograms and props that would be used day of. But 30 miles per hour winds and rain found the team holding its breath. "We couldn't get that first mister up until after midnight," says Blaney. "When we saw that hologram go up, it was an amazing feeling." That's the creative difference between a traditional campaign and this, adds Blaney. "Otherwise, we always know what's going to happen," he says. "This is just so remarkable and surprising when it all works out."

Another significant challenge was extending the reach of the campaign beyond the people who experienced it first-hand. "We had to treat the event as one and make the web experience just as dynamic as what was happening on the pier," says Ferguson. "What we were doing was so amazing that putting it in a 16-by-9 box on YouTube would not be good enough," says Brandon Kaplan, interactive producer on the project.

The tech team built out the interactive video on the website using two separate builds: HTML5 and Flash, as a fallback. Javascript techniques produced pop-up windows which opened at different times, each showing a piece of the action. Window choreography was based on a standard XML file, so rebuilding of code was kept to a minimum and both creatives and tech could easily modify where and when the windows were opening. Each separate window was an HTML5 player so you could pause and record video. 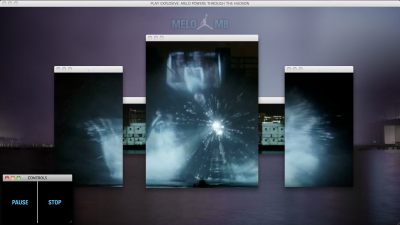 "Using HTML5 meant we could actually do stuff that was different from the event," says Kaplan. "In our toolkit, windows fade away when Melo's image fades away. That wasn't there on the pier." The stunts, the performances, the projections and the website each could have acted as standalone advertising pieces. But together, they produced an explosive experiential event. "One of the most important things we learned from the project was to let each medium do what it does best," says Ferguson. "You can't turn what happened out on the pier into a video exactly, so don't try to."

Other important lessons? Bring technologists in as early as possible, and keep them there till the end. "Tech is the other side of the coin but it's the same coin," says Husani Oakley, tech director on the project. There's also an increased sense of teamwork and integration, says Blaney. "A traditional ad campaign is so singular, but here there is a conscious effort to make sure everyone is working together. It's a real learning experience."