L'Oreal has become more centralized thanks to Marc Menesguen, who joined the company as a product manager in Paris in 1985 and became its first managing director-strategic marketing in 2010. At the same time, the company is also decentralizing by putting more marketers in such places as Brazil, Dubai, China and Japan, outside its traditional global marketing and research hubs in Paris and New York. 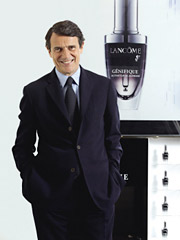 Marc Menesguen, CMO, L'oreal
Call it the new Zen of global marketing. On one hand, L'Oreal seeks more products and marketing ideas from places in Asia, Africa and Latin America, where it expects most of its next billion consumers to come from in the next decade. But Mr. Menesguen's job is also to find marketers doing things right at any of L'Oreal's far-flung outposts and then spread the best practices around as quickly as possible throughout the company.

"China, Brazil and India are coming up in the future as big growth providers," Mr. Menesguen said. "At least in terms of beauty, these countries have specific needs. Yet at the same time the people there dream of the same brands as everyone in the world -- L'Oreal, Lancôme, Maybelline, Yves St. Laurent or Ralph Lauren. This is the balancing act of the future."

Taiwan is one of Mr. Menesguen's favorite hubs for beauty innovation. It was, ironically, also the original launching pad in the late 1980s for the global restage of rival Procter & Gamble Co.'s Pantene, which ultimately became the leading global hair-care brand.

For L'Oreal today, Taiwan's digital savvy and youth are big draws. The island's population has an average age of 25, a stark contrast to rapidly aging populations in Europe, the U.S. and even China. That helps make it a laboratory for new marketing and product ideas, Mr. Menesguen said.

In Taiwan, the digital share of L'Oreal's media budget is 20%, vs. 8% globally, "and we've seen a tremendous impact on sales," he said, with the country last year tripling its growth rate from the prior year.

For example, the Garnier brand team in Taiwan in 2010 developed a 100% digital campaign behind the launch of skin-lightening cream Light, backed by testimonials from beauty blogger Niuer that were incorporated into a viral and display-advertising campaign. Light remained the No. 1 skin-lightening cream in the market last year, still with an entirely digital budget.

Meanwhile, in mainland China last year, Lancôme created its own social network, Tresor Rose Beauty, which has drawn 900,000 members and has what Mr. Menesguen called "an amazing earned impact with a minimum amount of investment."

L'Oreal, with $28 billion in global sales, is the world's third-largest advertiser behind P&G and Unilever, spending about $5 billion a year -- half of that in Europe, and much of it through global networks Publicis Worldwide, McCann Erickson.

Mr. Menesguen also highlights how little the company spends on campaigns such as one for Dermablend in the U.S. The brand's "Zombie Boy" video from Tuxedo, Montreal, has generated more than 13 million viral video views since its launch last October to support body cover and tattoo-primer products. And U.S.-based retailer Kiehl's is L'Oreal's fastest-growing global brand, despite doing little or no paid advertising.

But the key to Kiehl's global success on a paid-media-free diet, Mr. Menesguen said, is really superior service, particularly in Asia, where it's now L'Oreal's second-largest brand because service is so highly prized in markets there.

The Kiehl's and Dermablend cases aren't really meant to put a scare into L'Oreal's agencies or media providers. Mr. Menesguen said he still expects L'Oréal's marketing outlays to grow, remaining at 30% to 31% of sales as L'Oreal reports spending. "We have 27 global brands, each with its own model, some with media, some without media, some with service, some not," he said.

One sign of how media -- paid, social and global -- intertwine for L'Oreal is the use of actor Hugh Laurie as the face of the Men's Expert line in Europe. The ads from McCann, which broke last year, feature Mr. Laurie reprising his persona from the U.S. TV series "House" and have helped generate about a million YouTube views. Yet outside some modest online distribution, neither the campaign nor the products has come to the U.S. yet.

While he teased attendees at a recent World Federation of Advertisers conference about Mr. Laurie coming to the U.S. as a Men's Expert pitchman, Mr. Menesguen was coy in a later interview about the prospects for a U.S. House call. "I don't know," he said. "But it's great to see him inspiring European consumers."