Collaborations between food and apparel brands are gaining steam
READ THIS NEXT
Geico backs MLB’s ‘Field of Dreams’ game and McCormick makes a hot deal: Trending

America runs on Dunkin' has a new meaning.

The coffee chain, headquartered outside of Boston, has reunited with shoe brand Saucony to create a Dunkin'-inspired sneaker ahead of the Boston Marathon on April 15.

Saucony's Kinvara 10 feature the signature Dunkin' lettering, and come in a package resembling a box of Dunkin' Munchkins. (At $120, they cost a lot more than a box of donut holes.) Laces come in white, orange and pink, and donut medallions are attached to the laces. "Boston" is emblazoned on the back of the shoe.

Food-inspired sneakers are nothing new for Saucony. Last month, the sneaker brand released avocado-toast shoes, generating lots of buzz online. In 2014, the inspiration was burgers. 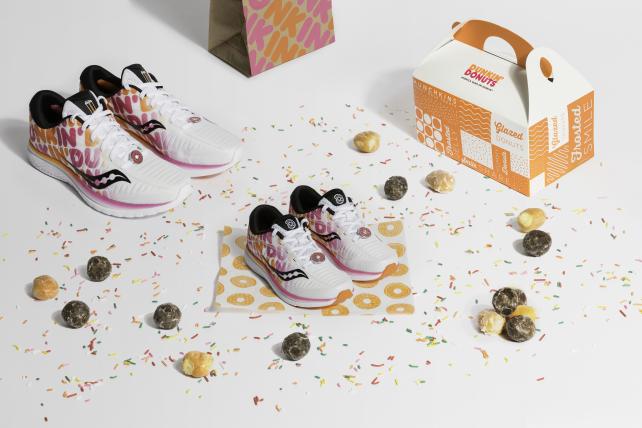 Collaborations between food and apparel brands have gained steam recently as food marketers recognize the possible gains of storing their brands in consumers' closets.

And last year, Pizza Hut rolled out sneakers that had buttons on the tongues of each shoe that could order pizza and pause the TV. The Pie Tops II, like the more limited 2017 predecessor, came out in time for March Madness.

It's the second year in a row Dunkin' and Saucony have worked on donut-inspired footwear. Last year, sprinkles and donuts covered Saucony's Kinvara 9. The 2,000 pairs sold out in under a day, Saucony says. They're being resold online for between $300 and $400 today on sites like eBay and Poshmark.