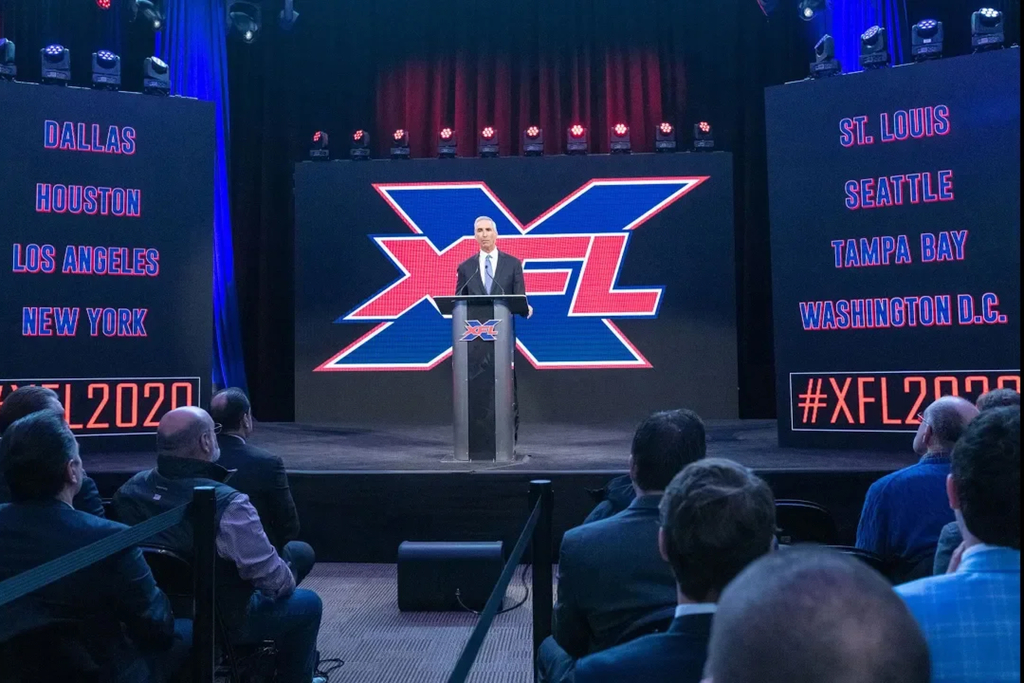 Spring football is a hard nut to crack, but Vince McMahon is giving his resuscitated XFL a better shot at drawing an audience with rights deals that will put more than half of the league’s games on broadcast TV.

The XFL this morning announced that it has hammered out multiyear agreements with ESPN and Fox Sports that will place 24 of the 43 games scheduled for 2020 on network television, with 13 contests slated to air on ABC and 11 headed to Fox. Designed to provide the greatest possible exposure for McMahon’s rebooted football league, the broadcast-heavy schedule will be supplemented by 19 games on the cable sports channels ESPN and FS1.

Neither network group is paying a rights fee for their respective XFL packages, although in exchange for picking up the tab for production costs, ESPN/ABC and Fox Sports will pocket any ad-sales revenue generated by the games. (Given a schedule that effectively sidesteps primetime, and a “less stall, more ball” approach to commercial breaks, in-game XFL inventory is unlikely to produce the sort of coin that would have Scrooge McDuck scrambling for his bathing costume.)

In addition to distribution across their various linear TV properties, ESPN and Fox have secured the streaming rights for their XFL games. Terms of the packages were negotiated by CAA Sports and Evolution Media Capital.

The new-look XFL will kick off on Fox Feb. 8, 2020, or just six days after the network broadcasts Super Bowl LIV from Miami. The now-defunct Alliance of American Football used much the same launch strategy earlier this year, when its inaugural game aired on CBS the weekend after it hosted Super Bowl LIII. The lone AAF game to be carried by a traditional broadcast network—the league folded shortly before a Week 9 game was to have aired as a lead-in to CBS’s Final Four coverage—the opener averaged a healthy 3.25 million viewers and a 1.9 household rating.

Once the AAF migrated to cable, the weekly deliveries began to lose steam. After scaring up 1.02 million viewers and a 0.6 rating on TNT in Week 2, the AAF would go on to average just 402,000 viewers and a 0.3 rating on cable.

While the success of the XFL will depend almost entirely on the quality of football it can muster up, its big-reach schedule offers the league a greater pool of potential converts than the AAF could expect from its own distribution scheme. In addition to the 14 games it aired on NFL Network, which reaches roughly half the number of households served by ABC and Fox, the AAF also ran weekly games on CBS Sports Network. The latter’s reach is sufficiently stunted that it remains unrated by Nielsen more than a decade after being acquired by CBS.

The XFL’s 2020 schedule features a pair of games on successive Saturday and Sunday afternoons, with the bulk of the Saturday games airing on ABC and Fox. Fox and ESPN will split the two playoff games, and ESPN is set to host the championship game on Sunday, April 26—the day after the closing round of the 2020 NFL Draft.

In advance of its opening season, the XFL has begun building franchises in eight of the nation’s largest media markets, including New York, Los Angeles, Dallas, Houston, Seattle and Washington, D.C.

McMahon earlier this month sold off $272 million in WWE shares to help fund the XFL relaunch, for which he’s pledged a total investment of $500 million. Along with its superior distribution scheme, the league’s best chance at succeeding where the AAF failed perhaps lies in the fact that the wrestling magnate is funding the venture with his own personal capital.