'Daisy' at 50: A Look at America's Most-Influential Political Ad

It was 50 years ago today that the Lyndon Johnson campaign launched one of the most important political ads in American history. With all the subtlety of the atom bomb that co-starred in the spot, "Daisy" -- officially known as "Peace, Little Girl" -- portrayed opponent Barry Goldwater as a danger to the country; likely saved the Johnson team millions in extra ad spending; and showed other political campaigns the kind of destruction TV advertising could do by ushering in a new age of attack ads.

That's not to say that attack ads were new in American politics. Since our first elections, American political campaigns and their allies have been saying things so vile that today's campaigns pale in comparison. Thomas Jefferson's opponents at The Connecticut Courant said that if he were elected, "Murder, robbery, rape, adultery and incest will all be openly taught and practiced." Not to be outdone, Jefferson's side accused John Adams of being of a "hideous hermaphroditical character, which has neither the force and firmness of a man, nor the gentleness and sensibility of a woman."

But in 1964, TV political advertising was still in its infancy. What Americans had seen of national political spots in the previous presidential runs was rudimentary, lacked sophistication and failed to harness the full potential the medium had to offer. "Daisy," crafted by none other than the advertising legends at DDB, would change all of that in 60 seconds.

The ad ran on Sept. 7, 1964, during a Labor Day prime-time showing of the 1951 film "David and Bathsheba," starring Gregory Peck and Susan Hayward.

In fact, Ad Age on the morning of Sept. 7 (in a story datelined Sept. 4) reported that the Democrats were going to kick off their advertising with a 60-second spot during the program and that it would likely consist of "some exceedingly hard-hitting material has been produced by their agency, Doyle Dane Bernbach Inc." Ad Age even had details of the ad. "It is described this way: It opens with an appealing three-year-old child walking blissfully through a field. She picks the petals from a flower, counting them as they fall. The picture switches to the count-down for a missile. In the background, President Johnson talks about the danger to our children unless nuclear power is controlled."

It's startling how close the description was to the real thing. (In an Ad Age clip held in the LBJ Library, and shared with us by Bill Geerhart of atomic-culture website CONELRAD, there's a handwritten note from former Ad Age Washington Editor Stan Cohen asking for shots of the spot ahead of time.) It's also surprising how, for all its accuracy, it doesn't do the spot justice at all. Not startling, this being a story about politics, was the disingenuous counter-claim in our report from the Democrats. The party, continued the Ad Age piece, "claim all these reports are based on nothing more than hearsay, and they suggest that the really dirty tactics will be coming from the GOP."

Whatever dirty tactics the Republicans got up to in 1964 have long faded in memory. They didn't stand a chance against "Daisy."

If for some reason you can't play the video above and you've never seen the ad, the premise is simple. A little girl stands in a field (no walking), counting as she plucks the petals off of a daisy. Then a countdown begins, giving way to nuclear annihilation as President Johnson himself provides the voice-over: "These are the stakes – to make a world in which all of God's children can live, or to go into the dark. We must either love each other, or we must die."

It didn't run again, partly due to the outcry, mostly because it didn't need to run again. According to atomic-age-obsessed CONELRAD, which has an extensive, must-read three-part history of the ad (complete with supporting documents and an interview with Daisy herself and a video clip of the DDB team), "Daisy" was also a pioneer in what we now call "earned media."

The spot may not have been re-broadcast as a paid ad, but it was run during nightly news segments. CONELRAD quotes a memo from the Johnson campaign's Bill Moyers (yes, that Bill Moyers) to the president, that reads in part:

"While we paid for the ad only on NBC last Monday night, ABC and CBS ran it on their news shows Friday. So we got it shown on all three networks for the price of one."

According to a Nov. 23 Ad Age article citing a Walter Pincus story in the Washington Star, the Democrats were billed for $4 million worth of advertising (including media) for that election, compared to the Republican's $4.6 million.

Republican outcry
Of course, Republicans were none too pleased with it and quickly began an outcry.

According to the Sept. 17 issue of Ad Age, Republican National Committee Chairman Dean Burch filed a formal protest with the Fair Campaign Practices Committee. "This horror-type commercial is designed to around basic emotions and has no place in this campaign," he wrote. "I demand you call on the President to halt this smear attack."

Interestingly, at the time of that complaint, Ad Age reported that the Democrats were "expected to continue to run the daisy commercial."

The same article noted that Senate Republican Leader Everett M. Dirksen, R-Ill., wrote to the National Association of Broadcasters, calling the spot "unfit for children to see, and takes the level of political campaigning to a depth never before approached in the history of television."

The NAB and the Committee declined to get in the middle of political advertising.

According to the same article, House Republican leader Charles A. Halleck said in a floor speech that "decent people resent this kind of play on emotions, this appeal to fear, this scare campaign that outdoes a horror movie."

Ad Age noted that even some "loyal Democrats" complained that the spot was "too hard-hitting." For its part, "Doyle Dane Bernbach … said the message was no more alarming than the comments made by the Republican candidate."

Certain pundits sniffed at the idea of Madison Avenue getting involved. CONELRAD quotes syndicated columnist John Chamberlain: "The really appalling thing about the present campaign is not the smear element, which is a hardy perennial. It is the evidence that people can be herded by Madison Avenue techniques into going against all they know to be true."

Element of truth
But one of the reasons the ad resonated was because it had more than an element of truth -- from the public's perception, at any rate.

Goldwater had spent the better part of the year painting a pretty grim picture of himself as someone with an itchy nuclear trigger finger and a man not so interested in anti-proliferation treaties. That, combined with the perception that he was, well, mentally unstable (partly due to his wife saying in an interview that he'd had nervous breakdowns while running his business) hadn't helped his cause.In fact, he'd done enough much damage to himself that the Johnson campaign seemed like it considered holding fire -- until Goldwater started moderating his image with some success.

According to CONELRAD, it was Bill Bernbach himself who wrote to the Johnson campaign, pointing out that one of the country's premier ad agencies had put its own business on the line for the cause because the stakes were so high:

"We are ardent Democrats who are deadly afraid of Goldwater and feel that the world must be handed a Johnson landslide. To play our small part in the achievement of such a victory we risked the possible resentment of some of our giant Republican clients (I personally told one it was none of his business when he phoned me about our action) and we had to turn away companies who wanted to give us their accounts on a long term basis."

Bernbach went on to note that the President couldn't rest on his position alone and that media exposure wasn't enough, stating that "exposure on TV or radio or a quote in the nation's press is not necessarily a call to action."

Sounding like an evangelist for the medium, Bernbach added: "There is no denying the influence television had on the last election; and in 1964 there are 8,550,000 more television sets in use in this country than there were in 1960." 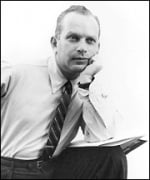 For all his talents, Bernbach likely could not have seen the long-term implications of the ad. He defended it at the time, from the position of someone who believed that nuclear holocaust was really at stake in the election, and years later defended the shop's participation, saying that it was done on principal and that for no amount of money would they have worked for the other side.

Some 20 years after the fact, Bill Moyers referred to the spot as a Frankenstein that they'd unleashed.

Bill Geerhart, a cold-war blogger and one the writers behind CONELRAD, said: "One of the reasons it resonated at the time is because so many people saw it at the same time and shared the experience. It ran during prime time when there were only three networks and long before the entertainment landscape became so fractured. It was also, of course, a very powerful spot to begin with. I would agree with Bill Moyers in that the Daisy ad made negative ads more acceptable. There had been negative spots before, but none as effective."

And it did have long-term implications, setting the tone for political TV advertising for generations to come.

In fact, in a 2012 piece for Ad Age picking the all-time political ad MVPs, panelists Pete Snyder, Joe Trippi, Mike Murphy and Roger Ailes, gave the No. 1 spot to "Daisy."