The Trump and Sanders campaigns, plus a pro-Biden PAC, get singled out
READ THIS NEXT
Watch The Lincoln Project’s data-driven viral video, plus a young poet’s instant fame by the numbers: Datacenter Weekly 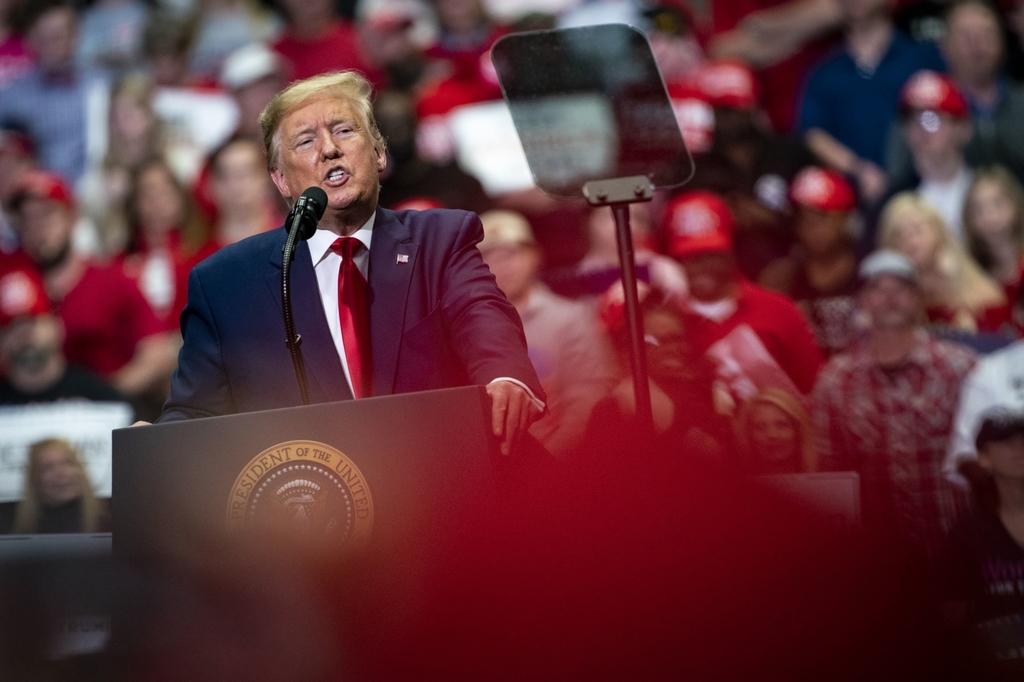 Google rejected dozens of ads from Donald Trump’s presidential campaign for violating its ad policies in the week leading up to Super Tuesday, as well as a Bernie Sanders ad and two from a political action committee supporting Joe Biden, according to data released by the company Tuesday.

A spokeswoman for Alphabet Inc.’s Google declined to comment on its decision to remove any specific ads. It has removed the content from its database of political ads, so it’s impossible to know exactly what rules were broken. The company has a policy against making a “false claim” in a political ad, and said in November that it was banning “doctored and manipulated media,” sometimes known as deep fakes, as well as misleading messages about the census and the “electoral or democratic process.”

Google sometimes pulls down ads for technical reasons, such as linking to non-functional websites. Representatives for Trump and Sanders didn’t respond to requests for comment.

“A few of Unite the Country’s advertisements were paused by Google for technical reasons,” says Mark Paustenbach, a spokesman for Unite the Country, the pro-Biden PAC. “Both Google and Facebook have been extremely responsive to us and have been helpful in ensuring our campaigns are running smoothly.”

Google isn’t the only tech platform to take action against political candidates running afoul of their rules this election cycle. In February, Twitter suspended about 70 accounts tweeting identical messages in support of Michael Bloomberg, describing the effort as violating its rules against “manipulation and spam.”

Bloomberg’s campaign—which the candidate suspended today after his poor Super Tuesday showing—also seemed to skirt Facebook’s rules on transparency by hiring Instagram users with large followings to post supportive messages. These messages were labeled as advertisements. But Facebook sees posts like this, known as “sponsored content,” as something apart from traditional advertising. It didn’t initially include the posts in its political ad archive.

Critics, including Senator Elizabeth Warren, quickly attacked both Facebook and the Bloomberg campaign for what they saw as a loophole. Facebook eventually added a tracking tool so people could find these types of ads moving forward.

Four years ago, Russian interference in a presidential election led to a crisis in public confidence in the ability of tech companies to manage political speech. The 2020 campaign is already showing they haven’t completely figured it out. “When it comes down to it, there aren’t clear rules and regulations for the social media space,” says Rebekah Tromble, a media and public affairs professor at George Washington University.

While pushing the limits may alienate some people, there’s also an advantage to doing so, according to Patrick Egan, a professor of public policy and politics at New York University. “We have such a rapid news cycle that any kind of blowback you get for ‘breaking the rules’ on this kind of stuff disappears into the ether within 24 hours,” he says.

The companies themselves may also face consequences, at a time when there is increased political appetite for imposing new rules on them. The deliberate pace of their reforms has opened them up to criticism. A part of Facebook’s efforts focuses on an independent content oversight board to weigh in on its most complicated content decisions. The board is supposed to be up and running sometime this summer, but it could take up to 90 days for it to make decisions and policy recommendations.