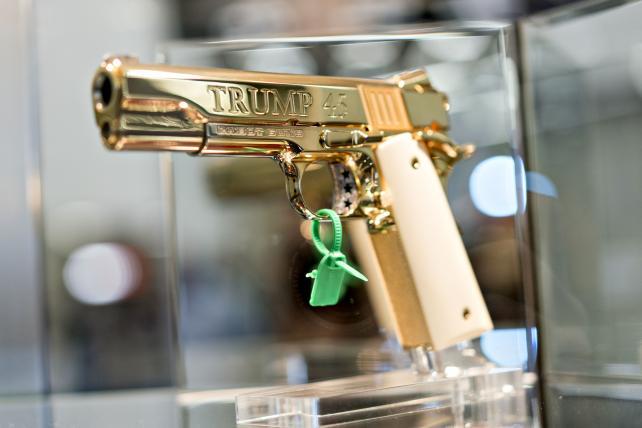 'Trump 45' is seen on the side of a Cabot Guns special edition pistol on display at the NRA annual meeting in Dallas last May.
Credit: Daniel Acker/Bloomberg

The National Rifle Association says it'll spend at least $1 million on TV ads urging the confirmation of Brett Kavanaugh to the Supreme Court in states represented by four vulnerable Democratic senators and a Republican considered a key vote on the nomination.

The advertisements promoting President Donald Trump's nominee will run on cable and local broadcast stations as well as on digital platforms in Alabama, Alaska, Indiana, North Dakota and West Virginia. It adds to the flood of money from outside groups on both sides of the confirmation fight that will take place in the Senate in the fall.

"The NRA strongly supports Judge Brett Kavanaugh's confirmation to the U.S. Supreme Court because he will protect our constitutional right to keep and bear arms," Chris W. Cox, executive director of the group, said in a statement on Tuesday. "It's critical that all pro-Second Amendment voters urge their senators to confirm Judge Kavanaugh."

The ads are aimed at swaying the votes of four Democratic senators running for reelection in November in states Trump won by wide margins in 2016: Joe Donnelly of Indiana, Joe Manchin of West Virginia, Doug Jones of Alabama, and Heidi Heitkamp of North Dakota. Donnelly, Manchin, and Heitkamp were the only Democrats who voted to confirm Trump's first Supreme Court pick, Neil Gorsuch. Jones wasn't in the Senate at the time.

Republican Senator Lisa Murkowski of Alaska, who supports abortion rights, is seen as a possible swing vote when Kavanaugh, a conservative appellate court judge, is considered by the Senate.

A thirty-second spot has already aired in Indiana, framing Kavanaugh's confirmation as necessary to protect the right of Americans to defend themselves.

The ad ends by asking viewers to call Donnelly's office, urging him to vote to confirm Kavanaugh. The NRA Institute for Legislative Action, the lobbying arm of the NRA, is listed as the sponsor. The ad ran Tuesday morning on an NBC affiliate in Evansville, Ind., according to Kantar Media's CMAG, which tracks political advertising.

The Second Amendment rights group views Kavanaugh as a tie-breaker on cases related to gun rights. Kavanaugh has also earned the endorsement of the National Shooting Sports Foundation, a gun industry lobby, as well as Gun Owners of America.