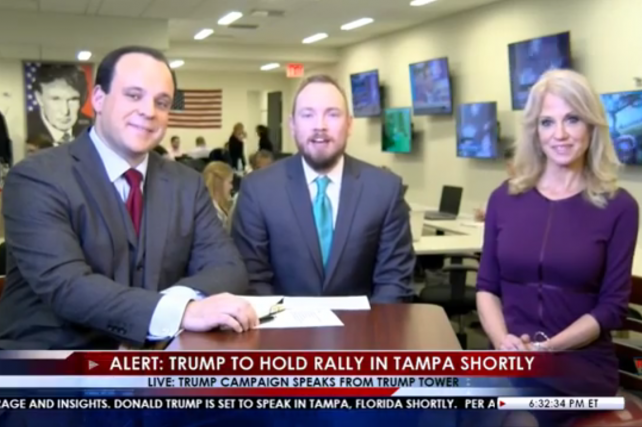 The Trump campaign's new Facebook Live show stoked speculation that the candidate plans to begin a media network if he loses the presidential election.
Credit: Donald Trump on Facebook

Donald Trump introduced a nightly Facebook Live program on Monday amid speculation that the Republican presidential nominee is plotting some sort of media channel should he lose the election Nov. 8.

The Trump campaign blasted out an email to supporters Monday evening, alerting them about "Trump Tower Live," which the email described as "nightly campaign coverage from Trump Tower."

There's been mounting speculation that Mr. Trump is considering introducing his own media channel after the election should he lose to Democratic presidential nominee Hillary Clinton. The Financial Times reported last week that Trump's son-in-law Jared Kushner contacted LionTree's Aryeh Bourkoff some time in the past few months to discuss launching "Trump TV."

Mr. Trump himself denied last Tuesday that he's eyeing starting a network. He told Cincinnati's 700WL radio that he has "no interest in Trump TV." "I hear it all over the place. I have a tremendous fan base, we have a tremendous base. We have the most incredible people, but I just don't have any interest in that," Trump said on the radio program.

The mainstream media remain a favorite Trump target at his rallies on the campaign trail, and in recent days he pushed the theory that the media is intentionally misleading voters about the closeness of the race by promoting "phony polls."

"What they do is they show these phony polls where they look at Democrats, and it's heavily weighted with Democrats. And then they'll put on a poll where we're not winning, and everybody says, 'Oh, they're not winning,'" he said Monday in Boynton Beach, Fla.

A person close to the campaign, granted anonymity to speak openly about campaign issues, said that the proposed media venture was discussed only in passing and never in a formal capacity.

"We're always thinking about innovative ways to reach the voters," Mr. Epshteyn said. "Mr. Trump has been unbelievably active on social media. This is part of our efforts to reach voters."