After helping to take down Trump campaign chief Brad Parscale, The Lincoln Project targets the ‘pampered princeling’
READ THIS NEXT
Watch The Lincoln Project’s data-driven viral video, plus a young poet’s instant fame by the numbers: Datacenter Weekly 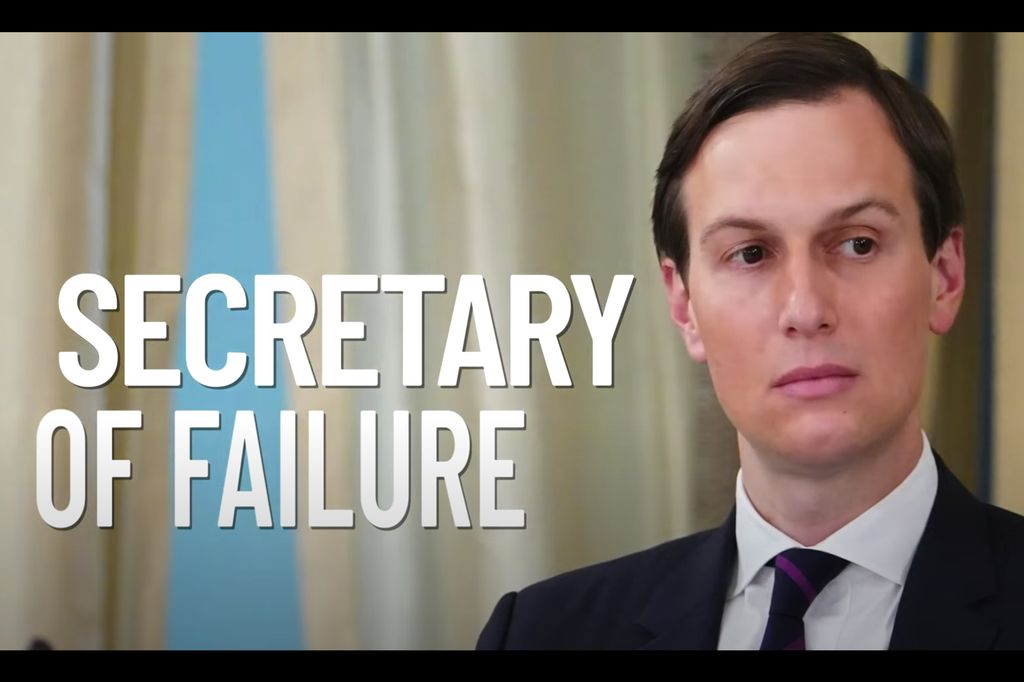 Conservative PAC The Lincoln Project is out with a new anti-Trump attack ad (video below) that goes after the president by slamming the track record of Jared Kushner, his son-in-law.

Though Kushner is technically a senior advisor to the president with an improbably large portfolio of responsibilities—Trump has tasked him with solving the opioid crisis, negotiating peace in the Middle East, coordinating the national response to COVID-19 and more—the ad dubs him “Secretary of Failure” in focusing on his actions surrounding the pandemic.

“President Trump gives lots of jobs to his son-in-law Jared Kusher. Insiders whisper that he may be even more powerful than Trump,” an announcer declares in voiceover as we see media headlines including “Jared Kushner Is the ‘De Facto President of the United States’ Says Former White House Official” (GQ).

“But like his father-in-law, Jared’s not up to the task,” the announcer continues. “This pampered princeling has never met a problem he couldn’t [beep] up. Take the COVID response Trump assigned Jared to handle. 150,000 people dead—and an economy in ruins.” Here we see a brief clip from an April Fox News interview in which Kushner predicted that “by July, uh, the country’s really rockin’ again.”

“His task force put Trump cronies first,” the announcer adds, “and of course Jared’s family cashed in on bail-out money. No surprise from the son of a convicted felon and slumlord who served time in prison.” Cue a shot of Charles Kushner, plus another headline: “Chris Christie: Jared Kushner’s father committed ‘one of the most loathsome, disgusting crimes’ I prosecuted” (CNN).

The ad closes out with this assessment: “Jared’s a perfect fit for this White House. But if you ever wondered whether this president took COVID-19 seriously, look no further than who he put in charge of protecting America’s health: Jared Kushner—Trump’s Secretary of Failure.”

The Lincoln Project has become a major sensation this election cycle, producing a barrage of viral video ads that not only attack Trump but members of his inner circle (see also: “Trump just demoted his campaign manager. Watch the weird personal attack ad that helped do him in”).

The Lincoln Project, as Ad Age previously reported, launched in December with an op-ed in The New York Times headlined “We Are Republicans, and We Want Trump Defeated” (subhead: “The president and his enablers have replaced conservatism with an empty faith led by a bogus prophet”). The NYT bio line for the op-ed’s authors—George T. Conway III, Steve Schmidt, John Weaver and Rick Wilson—noted that they “have worked for and supported Republican campaigns.” Conway is married to Kellyanne Conway, counselor to the president in the Trump White House. “I don’t know what Kellyanne did to her deranged loser of a husband, Moonface,” Trump tweeted on May 5 in the wake of the release of a previous Lincoln Project ad, “but it must have been really bad.” Trump’s public anger about that earlier anti-Trump ad, titled “Mourning in America,” helped it go viral.

Here’s the “Secretary of Failure” ad: