The road at the Tour de France.
Credit: All photos courtesy Adam Heathcott.

Lance Armstrong returns to the Tour de France this year, and this time he's brought a robot.

Wieden + Kennedy, Portland, Nike and Armstrong's foundation for people affected by cancer, Livestrong, have created a robot that lets people from anywhere in the world chalk messages of inspiration, hope and encouragement directly on the course of the premier French bicycle race.

Users can submit messages via text message, the campaign website, online banners or Twitter for the chance to be printed on the Tour roads by a street-painting robot, Chalkbot. Wieden's executive interactive producer Marcelino Alvarez and technologist-cum-creative Adam Heathcott say that about 90 percent of the messages that have come through and been approved are from Twitter. And because of Twitter's characteristic character limit, the short Chalkbot messages, averaging less than 40 characters, have been some of the most poignant and well-written. Alvarez and Heathcott are both with the Chalkbot in France--see their photos of the robot and chalk messages in situ at the end of the story.

Once submitted, messages are queued and reviewed and up to 100,000 will be inscribed on the roads that make up the course. Approved messages are sent to the Chalkbot, which was developed in partnership with Pittsburgh-based mobile software design company DeepLocal and StandardRobot. Like a giant dot-matrix printer on wheels, Chalkbot sprays a liquid chalk mixture onto pieces of road about eight hours ahead of the Tour bikers. The person who originally submitted the message will then receive a link to a robot-captured photo of the chalk design along with its GPS coordinates as a record of their words in the physical world. Nathan Martin, CEO of DeepLocal, introduces the project and explains how Chalkbot works in the videos below.

Chalkbot Intro Video
How It Works
"[Creative] James Moslander and I were very interested in making a digital experience a physical experience as well, something that exists out in the world that talks both ways," Heathcott says. "We started looking at the different things that exist out in the world for the Tour de France. One of the things we came across that's already being utilized by local Livestrong chapters was chalk. Historically in the races they've done chalking on the roads: messages of support for their favorite rider, hi Mom, whatever."

"Livestrong is an organization that doesn't just exist on a web forum," he adds." It's people that go out and do things to make change in our world, how we feel about cancer and how we go about getting it eradicated. They're out in the world, so making an experience out in the world, instead of one in their cubicle, speaks to people more directly. This campaign invites people from all over, people who can't normally participate in the Tour de France because it's too far away or because they can't afford to travel, to play a part in cancer awareness."

Once the idea for automated chalk messages was hatched, Heathcott thought of friends from Pittsburgh who had worked on street-writing robots GraffitiWriter and StreetWriter in 1998 and later formed DeepLocal and StandardRobot. (See some backlash about Wieden and Nike's use of the concept here.)

Alvarez says the major challenges of the campaign came after the robot was built and programmed. For one, the team had trouble finding chalk paint that's non-toxic, removable and in Livestrong's signature yellow. And then there was the issue of travel.

"Getting a robot that looks like a nuclear device through customs in France," Alvarez says. "Not an easy thing to do." 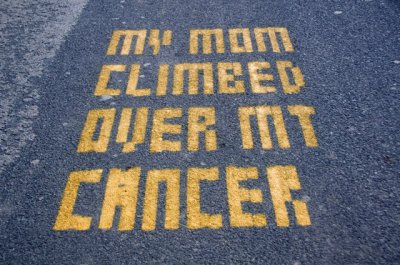 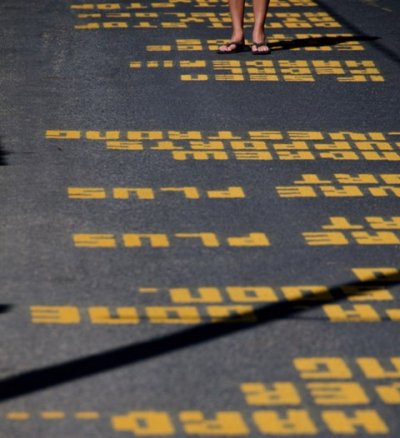 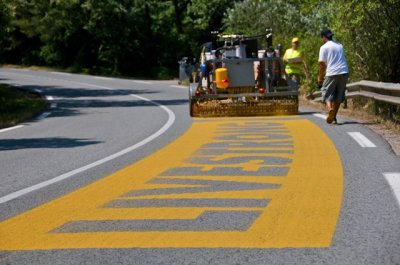