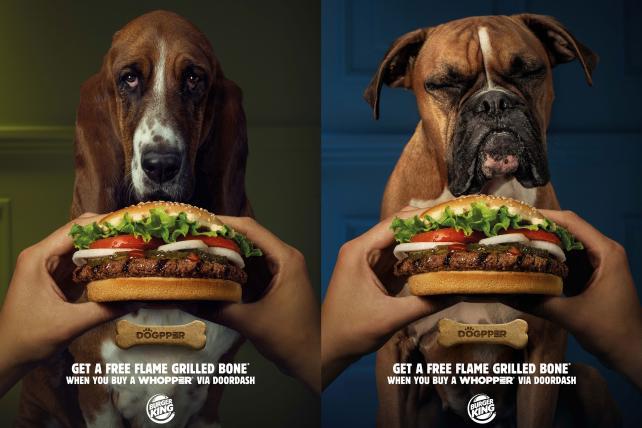 One of BK's wackier marketing stunts of the year (and there were several) went to the dogs: The chain offered a Dogpper flame-grilled dog biscuit with every Whopper order from DoorDash, the chain's new food delivery service partner. (Soon after the promo started, BK had another Whopper deal: a penny per burger if ordered on its app while at McDonald's.)

As the pizza delivery giant says, "Bad roads shouldn't happen to good pizza." Which is one reason why it asks people to nominate spots where roads need paving, then shows up to fill potholes and pave streets, often spraying its logo over the finished work. The push is set to continue into 2019.

The brands teamed up for a contest offering a year's supply of two key life hacks for the time-pressed: Dove dry shampoo and Dunkin' coffee. An odd, yet somewhat satisfying coupling for sleepy mornings.

The chain substituted a "B" for the "P" in the IHOP moniker on social media and on the signage at one Los Angeles restaurant to get people thinking about its burgers, and not just its pancakes.

A print ad for Ikea's Sundvik crib included technology that also made it a pregnancy test. If peeing on the paper came out positive, the price of the crib dropped significantly to reflect the new price available with an Ikea Family discount.

A limited run of labels on Johnnie Walker Black Label bottles were printed not with the "striding man" logo, around since 1908, but with Jane Walker, a female version made for Women's History Month.

The fast-food chain held a contest for babies. Literally. It asked parents who had babies on Colonel Sanders' birthday (Sept. 9) to name their child Harland, promising $11,000 for the winning child's future education. The family that won had a girl named Harland, who is (a) adorable and (b) going by the nickname "Harley."

To promote the new season of AMC's "Better Call Saul," fans in New York and Los Angeles could order free fried chicken and fries from the fictional restaurant, Los Pollos Hermanos—run by meth dealer Gus Fring—through Postmates. The pseudo chain (tag: "Taste the Family") is featured on that series and its predecessor, "Breaking Bad."

The brand came out with miniature turntables that play Oreo cookies: Take a bite, put the "record" back and a different tune plays. The gift idea has caught on, even appearing in a Lifetime Christmas movie.