Ad campaigns urge getting vaccines that are nearly impossible to find

Health care experts defend ad efforts that are stoking demand despite COVID vaccine scarcity
READ THIS NEXT
Free Budweisers for the vaccinated, and ‘Vax Tee’ from Miller Lite: Trending 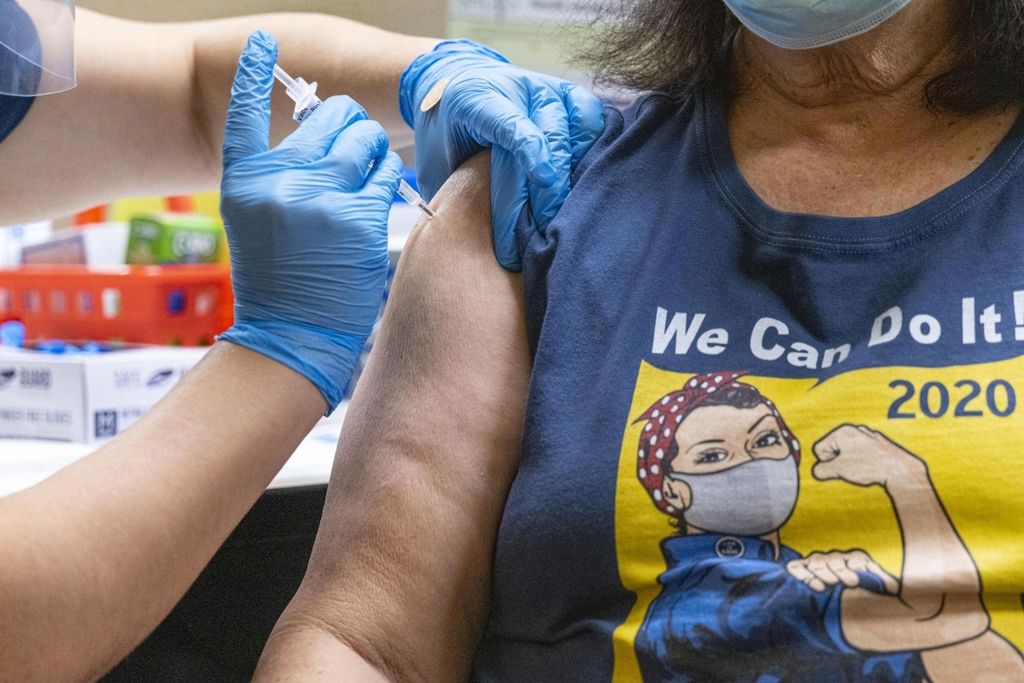 A healthcare worker administers a dose of the Pfizer-BioNTech Covid-19 vaccine to a person wearing a protective mask at a large scale vaccination site in Sacramento, California, U.S., on Thursday, Feb. 4, 2021.

Andrea Palmer has an intimate understanding of the shortage of COVID-19 vaccines. Her 90-year-old grandmother, who lives in an independent-living facility, was recently told it wouldn’t be a problem for her to get an appointment for her first dose—in May. She might be one of the lucky ones. Palmer has friends whose elderly family members have been informed they won’t get their shots until June.

That is an understatement.

Scores of multimillion-dollar ad campaigns on the city, state and federal level have emerged to persuade the public, especially the most vulnerable and underserved communities, to get inoculated against COVID. Vaccine marketing assignments have been fat new business wins for ad agencies amid the pandemic. High-profile efforts have been announced by the Ad Council, along with local efforts by Philadelphia agency Brownstein, San Francisco’s Duncan Channon, which nabbed a $40 million assignment for California, and others. WPP Group is about to unfurl a $115 million-plus effort to promote the vaccines nationally on behalf of the U.S. Department of Health and Human Services, Business Insider reports.

And yet the glaring scarcity of vaccines is what dominates the national conversation, as people waiting in long lines for shots has become a familiar sight on cable news.

A new Gallup poll indicates that two-thirds of Americans are unhappy with how the coronavirus vaccine rollout has been run, including 21 percent who say they are “very dissatisfied.”

The situation has led to “an every-man-for-himself mentality,” said Palmer, who wonders what the solution is to the disparity between the well-intentioned public awareness push and the lack of product. “What is the role of retailers, of institutions, of state and federal governments?” she asks. “There are so many different opinions about who is in control that no one is in control, or so it seems.”

It’s led many to take matters into their own hands. Facebook and Twitter accounts keep popping up to broadcast well-kept-secret vaccine spots. (One Twitter account out of New Jersey, called “Vaxx Updates,” has amassed more than 13,000 followers in just over two weeks.) Many other vaccine chasers are flying off to neighboring states where they hear there’s a surplus. There may be a light on the horizon, as national drugstore chains like CVS and Walgreens will start to receive supplies of the vaccines this week, and some are already promoting that fact. Meanwhile, Uber recently announced that it will provide free rides to Walgreens stores for those in underserved communities getting the vaccine.

There could be a larger role for marketers in the vaccine rollout, Palmer suggests—if it were more clearly understood who was in charge, and if there were a uniform message. “What marketers could do is to clearly lay out a simple, step-by-step process for people to take: ‘Here’s the list. Here’s how you get on it,’” she says. “Whether it was a local or regional initiative or a manufacturer’s initiative, marketers can help people navigate this confusing time. They have the mechanisms. But nobody’s done this, because there is not a single source of truth.”

As for the shops behind some of the emergent campaigns, a rep for Duncan Channon said the agency is not authorized to speak to the press about vaccination issues beyond its previously announced assignment from the California Department of Public Health, commenting, “The state of California wants us 100% focused on the work at hand and the message behind it.” Neither the Ad Council nor Brownstein responded to queries by deadline.

Yet, agencies and health care groups say that promotion of the vaccine, regardless of availability, is necessary.

Tim Leake, senior VP and chief marketing officer of Los Angeles agency RPA—which has experience with vaccines, having worked with UNICEF on its 2019 #VaccinesWork campaign—is confident the availability of vaccines is moving in the right direction, but stresses there is still much work to do to convince the public. He points to a Pew Research study from December which revealed that 20% of the population remained almost certain it would not take the vaccine.

“Not being able to get the vaccine is a short-term challenge and one that is improving week by week—the long-term challenge is vaccine hesitancy and the fact that a staggering number of people still say they won’t get it even when it’s available,” he said, noting that resistance is even greater in Hispanic and Black communities, which have been particularly hard hit by the virus. Those groups are among those specficially targeted by vaccine safety and awareness campaigns.

“It’s not about saying ‘The vaccine is here’—it’s about combating misinformation and internet conspiracies and proving and persuading [the public] that it’s safe,” he said.

Public awareness works hand in hand with the rollout of the vaccines, contends Chris Paquette, CEO of DeepIntent, a healthcare marketing tech firm whose clients include Publicis Health Media and AstraZeneca. Paquette points out there is ample precedent for building awareness before a product launch—for everything from Apple’s latest iPhone to the Sony PlayStation. “Obviously, the demand here far outstrips the supply,” he said. “But that’s the reason marketing is so valuable, from increasing awareness to lowering perceptual barriers. A lot of work goes into this to sway minds and get people to be less resistant to being vaccinated. That’s the most important role of marketers.”

Jim Weiss, chairman and CEO of San Francisco-based healthcare agency W20, whose clients include the drug makers Circassia and Lupin, says “Vaccine accessibility and vaccine awareness go together—it is not either or."

The general public may be frustrated, but members of the medical community agree marketers should continue to focus their attention on educating people.

“If the marketing campaigns encouraging people to get vaccinated aren’t targeted to these vulnerable populations, it will actually make it harder for these people to get the vaccines,” says Dr. John Showalter, chief product officer at the healthcare technology company Jvion in Atlanta, whose clients include Humana and Duke Health. “At least for now, we need to be more targeted in our vaccine outreach efforts so more of the vaccines we do have go to the people that need them most.”